The Battle of Baku was the conclusive battle that ended the war between the anti-Ottoman/anti-Musavatist forces in Baku and the Ottoman-Azerbaijani forces. The Army of Islam under the command of Nuri Pasha defeated the armed forces of the Baku Soviet in June and July 1918 and gained ground near Baku at the end of July 1918. As a result, non-Bolshevik groups in the Baku Soviet (the Dashnaks, right Socialist Revolutionaries and Mensheviks) toppled the Baku Sovnarkom headed by Stepan Shaumian and formed the Centro-Caspian Dictatorship. The dictatorship invited the Dunsterforce to assist them in the defence of Baku, but the efforts of the Centro-Caspian Dictatorship and Dunsterforce could not prevent the fall of Baku on 15 September 1918.

Nuri Pasha ordered the capture of Baku and the Caucasus-Islam Army’s assault on Baku’s front-lines began on 30 July 1918.

Before this assault, the Socialist Revolutionaries’ (SR), Dashnaks’ and Mensheviks’ proposal regarding the invitation of the Dunsterforce, a small operational British force in northern Iran, to Baku was approved during the extraordinary meeting of the Baku Soviet on the 25 July 1918, by 259 votes to 236.[1] Stepan Shaumian (1878-1918) resigned as chair of the Soviet, and the Centro-Caspian Dictatorship led by the SRs and Dashnaks replaced the Baku Sovnarkom.

Meanwhile, the Ottoman offensive continued until 2 August 1918 with great success. However, it could not deal the decisive blow due to insufficient artillery ammunition.[2]

The Ottomans planned to initiate the concluding stroke in their operation with a final attack on 5 August 1918. During this offensive, the city almost capitulated, but Shaumian ordered Colonel Grigory Konstantinovich Petrov (1892-1918) to employ the artillery. This surprise support from the Bolshevik artillery fended off the Ottoman offensive.[3] The coalition between the Bolsheviks, left SRs, and left Dashnaks on the one hand, and their political rivals on the other, soon crumbled, which led to the arrest of both Shaumian and Petrov along with twenty-four other revolutionaries later in August 1918.

The defenders of Baku sacrificed 600 men and twenty officers during the Ottoman attack. On the other hand, the Ottoman-Azerbaijani force had withdrawn, leaving sixteen machine guns on the battlefield.[4] As a result of the 5 August 1918 offensive, nine Ottoman officers were killed and nineteen wounded, in addition to 139 soldiers killed and 444 wounded.[5]

For the Ottomans, it was no longer possible to seize Baku with the existing military force.

Following the failure of the 5 August 1918 offensive, Nuri Pasha released a circular on 13 August 1918 in order to organize a new Azerbaijani army corps.[6] The existing Azerbaijani corps was abolished, and new Azerbaijani military forces began to be established under the command of Turkish officers.

While Nuri Pasha was trying to reorganize the military units under his command, Lionel Dunsterville (1865-1946) arrived in Baku with a small force on 17 August 1918. The Armenians were disappointed with the size of the unit.[7]

Even if Dunsterville’s force was insufficient to defend the city, Lazar Bicherakov’s (1882-1952) Cossacks, who had arrived in Baku from Enzeli with the Russian-Caspian fleet that had been armed by Dunsterville, also strengthened the Baku defence line.

Small British forces performed extraordinarily well during the Ottoman assaults that took place on 26 and 31 August 1918; however, British staff officers thought that native soldiers and staff officers were not trustworthy. According to Dunsterville, the Baku Armenians were very different from the Erivan and Anatolian Armenians in terms of bravery.[8]

The Battle and Its Consequences↑

The Ottomans launched the last attack on Baku on 14 September 1918. Immediately before this assault, the total number of Centro-Caspian and British forces was less than 8,000.[9] The 39th British brigade was in charge of defending Baku with 900 rifles.[10] The Ottomans’ 15th and 5th divisions were composed of a total of 11,564 soldiers and 448 officers.[11] The Ottoman force was supported by the newly established Azerbaijani regular units.

The local defenders in Baku fiercely resisted the Ottoman forces.[12] The Armenians decisively fought back with many losses, since they were afraid that the Ottoman-Azerbaijani forces would take revenge for the March Massacre carried out by the Dashnaks during the clashes between Azerbaijani nationalists and the Bolshevik-Dashnak coalition in early April 1918 in Baku.[13] But it was too late. The Battle of Baku lasted thirty-six hours.

According to the information given by Nuri Pasha, the Ottomans’ casualties totalled 851.[14] Another Ottoman source reported a total of 1,000.[15] On the other hand, Süleyman İzzet Bey strongly criticized the Ottoman command for its poorly established operation plan and for the extra casualties.[16] Lieutenant Colonel Robert Keyworth also asserted that Ottoman casualties were extremely high.[17] The actual number of Ottoman casualties was probably higher than that indicated in official figures.

The Dunsterforce’s losses during the defence of Baku were 180.[18] General Dunsterville had reached Enzeli with a total of 1,200 men, mostly British, in three ships.[19]

As a result of the last Baku attack, 1,151 Armenian, 383 Russian, four British soldiers and 113 people from various nations were taken captive by the Ottoman forces.[20]

Halil Pasha (1882-1957) indicated that they witnessed great violence when they entered the city. The Armenians tortured Muslims when they were in control of Baku. The Muslims took revenge on the Armenians after the Ottomans captured the city.[21] According to the figures of the special commission of the Armenian National Council, a total of 8,988 Armenians were massacred.[22] Nuri Pasha told German Lieutenant-Colonel Ernst Paraquin (1876-1957) that their forces were too weak to prevent these events at the time, and it would be appropriate to wait forty-eight hours to intervene.[23] On 16 September 1918, the Caucasus-Islam Army command took harsh measures against the robbery, slaughter and pillage that occurred after the seizure of the city, and more than 100 people who were involved in such actions were executed.[24]

The capture of Baku by the Ottoman-Azerbaijani force resulted in a strong reaction from both Germany and Soviet Russia.

Events that occurred before and during the battle showed how difficult it was for the revolutionary groups of Russia to develop a long-term cooperation, even in the face of a mutual enemy.

The seizure of Baku did not create any advantage for Enver Pasha’s long-term strategies. The only decisive result of the battle was that Baku became the capital of Azerbaijan. Most Ottoman soldiers evacuated the city a few months later, after the conclusion of the First World War. After the Ottomans left the city, British troops under the command of General William Montgomery Thomson (1877-1963) entered Baku and settled there on 17 November 1918 as a result of negotiations between Thomson and the Azerbaijani government. 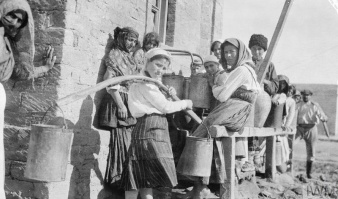