In World War I, the mobility of troops was of major strategic importance. New transportation means like trucks, as well as war planes, submarines and tanks, which began to revolutionize warfare between 1914 and 1918, were driven by oil-based fuel. By controlling more than 70 percent of the world-wide petroleum production, the Entente powers had a decisive military advantage.

Floating to Victory on a Wave of Oil↑

Judging by the statements of leading representatives of the Entente powers, petroleum was the factor that decided the Great War. According to the French economist Francis Delaisi (1873–1947), the victory of 1918 was simply the triumph of the Allied truck over the German railway – the first being driven by fuel and combustion engines, the second by coal. Lord George Curzon's (1859-1925) speech on the topic, held during the first post-war session of the Inter-Allied Petroleum Conference on 23 November 1918, was no less enthusiastic: "The Allies floated to victory on a wave of oil."[1]

If these conclusions seem exaggerated, there is no doubt that the control of strategic resources, including petroleum, had a decisive influence on the outcome of World War I. With the exception of Great Britain and the United States, all warring parties realized quite late that motor vehicles and fuel would become factors of military importance. They neither established strategic oil reserves before August 1914, nor did they make serious efforts to raise the oil production in their own area of influence. With the advancement of the war, this failure would come back to haunt the Central Powers and their allies.

The Oil Production and its Military Use before 1914↑

In the decades after the discovery of the first important oil field (1859, Titusville/USA), petroleum was almost exclusively used to fuel lamps. With the invention of cars driven by combustion engines (Benz, 1886) and the electric light (Edison, 1880) on the one hand, and advances in petrochemistry on the other hand, oil began to lose its original function. Since 1900, steam boilers and machines of different kinds had increasingly been fueled by petroleum products. Motor vehicles, airplanes and tanks could only be driven with gasoline. Railways and industrial machines needed oil as lubricant. Asphalt – an oil residue – began to play an essential role in street building. Trinitrotoluol (TNT) that could be produced on the basis of chemicals distilled from stone coal or oil served as explosive charge in grenades and torpedoes. The English production of TNT largely depended on oil.

While Germany, aiming at resource-autonomy, used coal to run its railways and fleet, the British Navy had switched to oil combustion in 1910, thereby increasing its operating distance and speed, but also its dependence upon oversea supplies.

Among the warring parties, only the United States and Russia could count on a sufficiently high domestic oil production. While Great Britain made considerable efforts to open up new oil fields in Persia and India, the French, Italian and German petroleum demand was almost entirely covered by imports. Although the Austro-Hungarian Empire disposed of an oil industry of its own in Galicia, it was unable to meet the demand of the Central Powers; moreover, the Austrian oil fields lay within the operational radius of the Russian armies. The Ottoman Empire, for its part, made no serious effort to develop its oil fields in Mesopotamia and the Arab peninsula. Romania's petroleum production was slightly higher than the Austrian and was largely absorbed by the German demand before 1914. If we add the output of the rising Mexican oil industry (dominated by US investors) to the strategic reserves of its northern neighbor, the United States controlled about 70 percent of the world's petroleum production at the outbreak of the war.

The Role of Petroleum during World War I↑

The wars of 1866 and 1870/1871 were at least in part decided by the German army’s ability to move large troop contingents over great distances thanks to a well organized railway system. Consequently, this means of transport played a key role in German war strategies before 1914. The Schlieffen Plan was based upon wide ranging army movements in the west that had to be executed as fast as possible; the massive deployment of Russian troops in the east could only be thwarted with the rapid transfer of troops by train from one front to another. Having arrived at the train station nearest to their final destination, soldiers had to walk with all their military equipment to reach the combat zone. That trucks might help to bridge the – often large – gap between the railway and the front was an idea that took hold much later. In 1914, neither motor vehicles nor airplanes played an important role in the strategic planning of the German High Command. Due to the fact that German railways were driven by coal, oil-based fuel was not a matter of interest when the management of strategic resources was established in 1914.

Even as the Western Front began to freeze in autumn 1914, mobile warfare became more and more important. From that time on, all efforts of the Entente powers and Germany aimed either at concentrating superior forces at one point of the front for a massive breakthrough or at strengthening their own side to thwart such intentions. This was only possible by quickly moving important troop contingents from one part of the front to another without being detected by the respective enemy – a logistical challenge that could only be met with adequate transportation facilities. The dense French highway system allowed the Entente powers to use trucks to transport troops and supply, thereby gaining a flexibility that the Germans lacked. When the United States, which produced trucks on an industrial scale, finally entered the war, this effect was drastically strengthened. In the last offensives of 1918, the mobility of the Allied troops almost entirely depended on motor vehicles and therefore on North American oil.

If airplanes played only a minor role at the outbreak of the war, they soon became an essential means of reconnaissance of the enemy's hinterland. Their number increased accordingly: Germany could count on 252 front-airplanes in 1914 and on 5,000 in 1918 despite all losses; in the same period, the French military aviation made a jump from 132 to 12,000 airplanes. Depending on the war theatre, the Allied air superiority ranged from 3:1 to 10:1. This predominance reflects the outstanding performance of Allied refineries whose fuel production far outclassed their German counterparts.

In the years before 1914, the initiatives of German chemists to counteract future oil shortages by developing methods to convert coal into fuel had made considerable advances, while the breakthrough to synthetic fuel production on an industrial scale failed to appear until the mid-1920s. The Silesian scientist Friedrich Bergius (1884-1949) - the leading expert in the field - discovered the physico-chemical process for coal hydrogenation under high pressure, which allowed him to file a first patent in May 1913 and continue his work as research director of Theodor Goldschmidt's (1817-1875) petroleum refinery company in Essen. However, the industrial implementation of his invention met numerous obstacles and had no military importance before 1918. Nevertheless, the Bergius-Pier process - the advanced version of his method of coal liquefaction - later became the basis for the mass production of synthetic fuel under the "Third Reich".

Astonishingly enough, the conquest or destruction of the respective enemy's oil production had no strategic priority for any warring party when the war broke out. In the debates on the origins of World War I, the Baghdad Railway, whose construction started in 1903, is sometimes interpreted as a German attempt to gain control of the Mesopotamian oil resources; this hypothesis seems to be refuted today. There was no forward-looking German oil policy of pre-war times carried forward by the High Command after 1914. The Turkish efforts to seize or destroy the Anglo-Persian oil facilities remained a war episode without consequences. When the Central Powers and the Entente tried to convince Romania to join their respective alliance, the country's oil fields certainly played an important role. In contrast, the Russian troops did not pay much attention to the Austrian petroleum facilities when they conquered Galicia. The German and Turkish competing efforts to gain control of the Russian oil fields of Baku ("Kaspi-Unternehmen", 1918) with the intention of breaking the Anglo-American petroleum monopoly, came too late to have any effect on the outcome of the war. 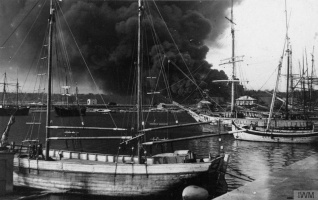 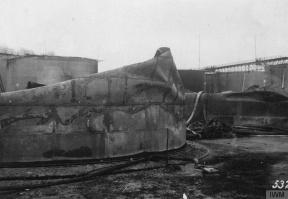