Karl Henry von Wiegand was the leading American foreign correspondent during the first half of the 20th century. His interviewees included Paul von Hindenburg, Adolf Hitler, Kemal Atatürk, Benito Mussolini, Mahatma Gandhi, Francisco Franco, and Konrad Adenauer. In 1917, Wiegand began working for William Randolph Hearst, and during the course of the 1920s he became a globally operating senior correspondent for the Hearst media company.

Karl Henry von Wiegand (1874-1961) arrived in Berlin in 1911, at the height of the Second Morocco Crisis. He obtained the patronage of Maximilian Harden (1861-1927). On 21 November 1914, Harden and the Centre-Party politician Matthias Erzberger (1875-1921) mediated an interview with Wilhelm, Crown Prince of Germany (1882-1951) in Stenay. Wiegand decided not to publish the prince’s candid verdict: “We already have lost the war”. But the interview did appear on 1 December 1914 in the New York Herald with the headline: “Crown Prince Interviewed on the War. Calls it Stupid”.

Not least because of his strong sense of discretion, Wiegand was soon regarded by the German leadership as their confidant in the American press. Interviews with Cecilie, Crown Princess of Germany (1886-1954), Reich Chancellor Theobald von Bethmann Hollweg (1856-1921), Count Ferdinand von Zeppelin (1838-1917), and Field Marshal Paul von Hindenburg (1847-1934) followed suit. The most controversial interview in terms of military policy was with Grand Admiral Alfred von Tirpitz (1849-1930), printed in the New York World on 23 December 1914 with the headline “Tirpitz Suggests Sub Blockade to Starve out Great Britain”. Here, Tirpitz vented his plans for unrestricted submarine warfare against Great Britain to a global audience several months before the campaign actually began.

Wiegand attracted international attention when he interviewed Pope Benedict XV (1854-1922) on Easter Monday, 5 April 1915, in the Vatican. It was the first political interview that a pope had ever permitted a journalist to publish. Matthias Erzberger and the German Special Envoy to Rome, Bernhard Prince von Bülow (1849-1929), had arranged the interview. It was printed on the front page of the New York World on 11 April 1915, and in it, Benedict XV criticized the USA for its arms deliveries to the warring nations, as this prolonged the war unnecessarily.

Wiegand’s reputation with the German leadership lead to President Woodrow Wilson’s (1856-1924) special advisor, Edward Mandell House (1858-1938), choosing him as an unofficial contact person for a secret mission to Berlin. House and Wiegand had met during efforts to mend the relationship between President Wilson and William Randolph Hearst (1863-1951) and to bring Hearst’s media company, which had been preaching George Washington’s (1732-1799) warning of “foreign entanglements” for years, onto a war footing. Wiegand left the USA together with staff of the German embassy in 1917.

Early in 1918, as a consequence of the panic caused by Erich Ludendorff’s (1865-1937) spring offensives (“Operation Michael”) and the initial appearance that Germany might be about to win the war, Colonel House chose Wiegand as an emissary to negotiate a separate peace between Germany and the USA, should worst come to worst, in neutral Stockholm. The mission for a separate peace was launched, and Wiegand received a passport from the State Department. Once the German armies were stopped at Amiens, however, the mission was cancelled and Wiegand stayed in New York. This aspect of the politics of 1918 has received little attention from historians of the First World War.

Wiegand was the first and last American journalist to interview Adolf Hitler (1889-1945): On 12/13 November 1922, the Hearst newspapers published the first interview with the “German Mussolini”. Wiegand’s last interview with Hitler took place on 9 June 1940 near the Führer headquarters “Wolfsschlucht 1”. It was printed in Hearst papers such as the Los Angeles Examiner and the New York Journal American on 14 June 1940, with the headline “Europe for the Europeans, America for the Americans”. The interview coincided with the Wehrmacht’s occupation of Paris and was intended to strengthen the isolationist movement in the USA in order to prevent an American intervention in the Second World War.

In his private papers, Wiegand mentions that after his interview on 9 June 1940 – similar to Colonel House in spring 1918 – Hitler wanted to send him to Britain as an unofficial peace negotiator, this time for the German side. Hitler hoped to make peace with Great Britain after his victory over France. Pointing to the very low chance of success of such a mission, Wiegand declined.

After the Second World War, Wiegand remained in touch with German politics. The young Federal Republic showed its appreciation for his journalistic support by awarding him the Cross of the Order of Merit on 28 September 1959. 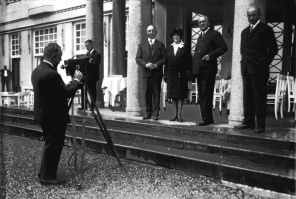