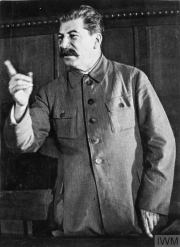 Joseph Stalin lived in Siberian exile from 1913 until the revolution of March 1917. During the early period after the “February Revolution”, as well as during the year November 1917 to November 1918, Stalin advocated his country’s non-participation in the Great War. The war had a lasting influence on his political thinking.

Joseph Stalin (1878-1953) was born in the Georgian town of Gori as Ioseb Jughashvili. He attended the Orthodox seminary in Tbilisi, but in 1899 abandoned his studies to become a professional revolutionary for the Russian Social Democratic Workers’ Party. Stalin (alias adopted in 1912) adhered to the party’s Bolshevik faction. He belonged to the category of grassroots activists who chose to stay in the country rather than to emigrate. In 1912, he was co-opted into the seven-man Bolshevik Central Committee. After his arrest early in 1913, he was exiled to the Siberian district of Turukhansk.

In exile, Stalin led an uneventful life. He worked on a sequel to his 1913 article “The National Question and Social Democracy”, but his efforts did not lead to a publication. He participated in a 1915 conference of exiles to discuss the insufficiently revolutionary behaviour of the Bolshevik Duma representatives. The Bolshevik leader, Vladimir Il’ich Lenin (1870-1924), defined the war as imperialist in nature, while calling for revolutionary civil war and for the defeat of the Russian army. It is unknown whether Stalin completely agreed with Lenin on these issues at the time. In 1939, he told his closest comrades that the civil-war slogan had been inappropriate for European countries.

After the fall of the tsar in March 1917, Stalin hurried back to Petrograd to assume a leading role in the Bolshevik Party. He rejected the Provisional Government’s appeal to “revolutionary defencism” and demanded that Russia conclude peace, but he was open to conditional cooperation with the government. After Lenin’s return to Russia in April, he soon came round to the latter’s more uncompromising position towards the government. The scholarly literature now tends to see Stalin’s initial differences with Lenin as less dramatic than before. Also, even though Stalin did not play any military role in the October Revolution, it is now acknowledged that, as the editor of Pravda and a member of the party leadership’s inner circle, he was intimately involved in the coup.

In November 1917, Stalin joined Lenin’s Bolshevik government as People’s Commissar of Nationalities. Before the revolution, Lenin had suggested that, if the Russian proletarian revolution were not followed by revolution in the West, Soviet Russia might engage in revolutionary war to break out of its isolation. After the revolution, Lenin rejected this as unrealistic, while opting for a separate peace with Germany to save the Soviet regime. Having little faith in early proletarian revolutions in the West, Stalin supported Lenin and the March 1918 Treaty of Brest-Litovsk.

As member of Lenin’s government responsible for nationalities, Stalin oversaw the disintegration of the Russian Empire caused by the Great War. While he agreed to let some nations go, such as the Finns and Poles, he took a major hand in forcibly reintegrating other parts, such as Ukraine and the Transcaucasian republics.

Influence of the War↑

From 1929 to his death in 1953, Stalin was the Soviet Union’s undisputed leader. The experience of the Great War had a profound and lasting influence on his political thinking and policies. He realised that the stability of the tsarist regime and of the provisional government had been fatally undermined by the war. He drew three conclusions from this: First, he advised communist parties abroad not to attempt to seize power in the absence of war. Second, in order to improve conditions for Soviet revolutionary expansion, it became a main goal of his foreign policy to induce war among the capitalist powers. Third, he suspected oppositional forces in the USSR of working towards foreign military intervention in the country so as to create favourable conditions for the overthrow of the Soviet regime.