Industrial tycoon and philanthropist Ernest Solvay transformed the chemical industry by developing a groundbreaking process for the manufacturing of soda ash. At the outbreak of World War I, he played an important role in the launching of a large-scale humanitarian drive for his native country.

After a difficult start, the family business “Solvay & Cie” that Ernest Solvay (1838-1922) and his brother Alfred Solvay (1840-1894) established in 1863 as a means to exploit a new process for the industrialization of soda ash became a thriving company worldwide. By the end of the 19th century, Solvay & Cie had subsidiaries in Great Britain, the United States, Germany, Austria-Hungary, Russia, as well as fully-owned factories in Belgium and France. The Solvay group was the world’s biggest chemical company up to 1914.

Ernest Solvay, on the other hand, was far from corresponding to the typical characteristics of a businessman, however successful he was in business. By the end of the 1870s, he openly formulated ideas in favor of social reforms and compulsory public instruction that would later bring him in close contact with socialist leader Emile Vandervelde (1866-1938). Without any formal degree, he was passionate about the conduct of scientific research as the true expression of his positivist theories. Next to his own reflections on the interactions between matter and energy, he became a staunch patron for the creation of institutes for scientific research, ranging from physiology to sociology. It was against this philanthropic backdrop that Ernest Solvay financially supported the highly selective Solvay Conferences on physics, whose famous first meeting took place in 1911, as well as the corresponding Solvay Conferences on Chemistry.

The war had a severe and long-lasting impact on Solvay & Cie: Belgian plants stood idle most of the period and the company’s headquarters, located in Brussels, were isolated from international networks. To a large extent, it was clear Solvay & Cie would never regain the preeminent position it had occupied before the war. The contrast was stark for Ernest Solvay who had celebrated in 1913 both his 75th birthday and the company’s 50th anniversary. His patriotic involvement grew even stronger after the invasion and subsequent occupation of Belgium. With the assistance of his grand-son-in-law, Emmanuel Janssen (1875-1955), he responded to the call for help from Brussels Mayor, Adolphe Max (1869-1939). On 1 September 1914 they joined forces with industrialists Dannie Heineman (1872-1962) and William Hulse, as well as financiers Emile Francqui (1863-1935) and Jean Jadot (1862-1932) to create a Central Committee for Relief and Food in Brussels, which soon extended its relief activities to the Belgian territory as a whole and became the National Committee for Relief and Food (CNSA for “Comité National de Secours et d’Alimentation”). Ernest Solvay was appointed Honorary Chairman of this committee, which was the driving force of a major humanitarian effort that continued to act throughout the conflict in cooperation with Herbert Hoover’s (1874-1964) Commission for Relief in Belgium. Even if the CNSA was not an official institution but an informal association, it imposed itself in many aspects as a kind of “alternative government” in occupied Belgium.

During the war, Ernest Solvay also supported various intellectual initiatives preparing the social, political, and economic reconstruction of postwar Belgium. One of them was the Committee for the Rehabilitation of Trade and Industry (Comité pour le Relèvement de l’Industrie et du Commerce), founded with Jean Jadot, director of the Société générale de Belgique, which aimed during the last months of the occupation to make an inventory of the damages inflicted to the country during the war. Interestingly, Solvay’s belief in internationalist values prompted him to send to the Paris Peace Conferences a couple of open letters reflecting his views. In recognition of his wartime efforts, Ernest Solvay was awarded the honorific title of “State Minister” by Albert I, King of the Belgians (1875-1934) on 21 November 1918. He devoted his last years to the development of the various scientific institutions he had funded since the 1890s, which became the lasting token of his commitment to internationalism. 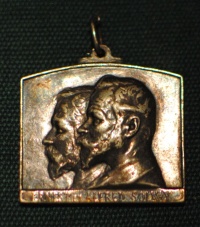 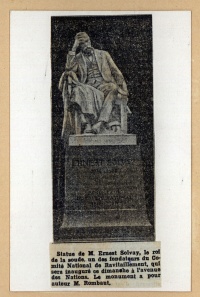