Social and political unrest swept the Russian Empire in 1905, forcing the autocratic tsarist regime to grant the creation of a popularly-elected legislative body; the State Duma. However, the army remained largely loyal to the Tsar, unlike in the wartime conditions of 1917, and the regime did not topple.

Starting in the mid-19th century, the Russian authorities promoted rapid economic modernisation while trying to maintain the traditional social order and political absolutism. State-led industrialisation, however, created new social groups, such as urban workers; enlarged the intelligentsia; and facilitated contact between villages and urban centres. These changes also increased the burden of taxation on workers and peasantry, although historians disagree over the degree of disenchantment in the countryside and conditions varied between regions. The perceived hardship nevertheless exacerbated long-standing peasant discontent with the terms of their emancipation, which required redemption payments for land they considered in their possession already. Grievances of the lower orders and aspirations for political participation of sections of the nobility and intelligentsia had few outlets. The tsarist regime did not acknowledge urban workers as a group; they remained peasants under the law and were expected to remain subservient to authority, whether that was factory owner or Tsar. The powers of landlords and provincial governors over peasants were wide-ranging and arbitrary. Freedom of speech and association were virtually non-existent. City councils and rural zemstvos, elected local government institutions granted in the 1860s, were repeatedly restricted. Nicholas II, Emperor of Russia (1868–1918) also discriminated against national minorities through his policy of “Russification”.

Dates given for the beginning, the high point, and the end of the revolt vary according to the interpretation or social group of interest to the historian. Left-wing social historians concentrate on workers as the driving force. They deem Bloody Sunday on 9 January 1905, when police and soldiers fired on unarmed workers marching to present the Tsar with their demands, to be the onset of revolution; they consider the armed uprising in Moscow in December 1905 as the high point.

Historians of peasant revolt trace disorder to an imperial decree of February 1905 that invited peasant communes to address grievances in petitions to their “little father”, i.e. the Tsar. Unrest in the countryside became more widespread and militant in the autumn of 1905 and was not fully suppressed until 1907. Historians identifying with a “liberal” perspective detect the existence of pressure on the autocracy as early as autumn 1904. At that point, a disastrous war with Japan and the replacement of the assassinated hard-line Minister of Internal Affairs Viacheslav Konstantinovich von Pleve (1846–1904) by the more conciliatory Piotr Dmitrievich Sviatopolk-Mirskii (1857–1914) prompted Russian liberals to launch a campaign for political reform. The challenge to the established order, in this view, peaked with the general strike of October 1905 and the Tsar’s decision to agree to an elected legislature, the State Duma. It ended with the dissolution of the Second Duma and rewriting the electoral laws in favour of ethnic Russian landowners in June 1907.

The liberal movement was a loose collection of gentry, zemstvo officials and members of the professional intelligenstia: teachers, doctors, lawyers, agronomists, engineers, and statisticians often employed by the zemstvos and referred to as the "Third Element". Their overarching aim was to secure civil and political freedoms and a popularly-elected national representative body. This umbrella group, however, accommodated agendas from moderate constitutional aspirations to solidarity with revolutionaries and the masses. By October 1904 liberals had set up an underground movement, the Union of Liberation, and between November 1904 and January 1905 the movement’s "banquet campaign" spread resolutions in favour of personal freedoms and a parliamentary legislature, ideas which had been adopted first at a national zemstvo congress. The campaign brought together Union of Liberation supporters, zemstvo activists, and even members of the radical intelligenstia at ostensibly private gatherings and their resolutions caused a sensation when reported in newspapers. Liberals also helped organise intelligentsia unions, such as the Engineers’ Union, which were then coordinated into a Union of Unions in May 1905. The Union of Unions supported radical measures to topple the autocratic regime, including the general strike. The disparate liberal movement split in October 1905 when moderates, frightened by the spectre of violence, sought to realise their aims through participation in the proposed Duma, while the majority of the radical intelligentsia moved further left.

On Bloody Sunday thousands of workers, women, and children, led by former priest Father Georgiĭ Apollonovich Gapon (1870–1906), marched towards the Winter Palace, singing hymns and carrying portraits of the Tsar. They also carried a petition pleading for an eight-hour workday, the right to establish trade unions, a democratically-elected constituent assembly, and civil liberties. The regime’s violent response rallied and radicalised opposition. Labour unrest is hard to measure, but hundreds of thousands of workers went on strike in most months of 1905, demanding better pay, medical care, and political reform. Unrest peaked in the general strike of October, when stoppages by railway and factory workers, students, pharmacists, and white-collar employees in banks, government offices, and utilities paralysed the country, crippling supplies of food, medicine, and other services. In Moscow in December strikes gave way to armed insurrection by workers and the socialist intelligentsia, supported by the broader public. The relationship of the workers to revolutionary parties in 1905 is much debated, but it seems workers did not merely provide the muscle of direct action in response to Menshevik, Bolshevik, and Socialist Revolutionary rhetoric. They participated in organisations coordinating the mass movement, including factory committees, unions, and soviets; pressed their own agenda, such as polite treatment by foremen; and at times forced the hand of party leaders.

Accounts of the peasant movement in the provinces conventionally emphasised spontaneous, violent actions, e.g. arson and destruction of estates; the peasantry was seeking to settle scores with landowners and repartition lands forcefully while the state’s power was diminished. Historian Scott Seregny, however, argues that peasants also began to organise around a programme demanding nationalisation, transfer of all land to the peasantry, local government, education reform, civil rights, and an elected national assembly. Peasants, along with Socialist Revolutionary activists, liberal gentry, and radical "Third Element", formed local branches of the All Russian Peasant Union, which channeled activism into tactics such as petitions and boycotts of official institutions and orders for taxes or army recruits. In several borderlands of the empire, notably the Polish kingdom, the Caucasus, and Baltic provinces, national sentiment intertwined with social and political discontent; unrest was particularly ferocious.

The regime’s response veered between repression and belated concessions, on which it often reneged, exacerbating the turbulence. Following Bloody Sunday, Nicholas placed swathes of the empire under emergency rule, investing officials with extraordinary powers to imprison, fine, or exile alleged offenders and dismiss local government organs. At the same time, he set up the Shidlovskii Commission to examine worker grievances, which he later disbanded. Amidst the October strike he finally issued a manifesto promising civil liberties and an elected State Duma to approve legislation. Even so, the regime was reluctant to punish individuals involved in attacks on Jews, the intelligentsia, and critics of the autocracy. Between December 1905 and summer 1907 it sent out punitive expeditions of troops across the empire to conduct court martials or summary punishments, including executions of supposed anti-government agitators. The Tsar also undermined the powers of the Duma, dismissing it when it proved incompliant.

Vladimir Lenin (1870–1924) famously termed the 1905 Revolution the "dress rehearsal" for the October Revolution of 1917. Some western historians emphasise the importance of 1905 as a revolution in its own right. Virtually all social groups and geographical areas were affected, and in some localities insurgents briefly assumed the powers of government. The autocracy was driven to the brink of collapse and forced to concede limits on its power for the first time. The ruling class maintained significant political power, however, due in part to the continuing loyalty of most of the army. While some historians believe that 1905 fatally weakened the old order, for others it was not until World War I, and its effect on society, the economy, and the army, that a final blow seemed possible. 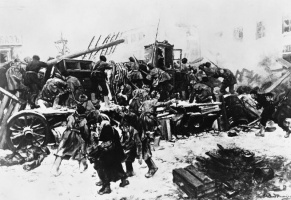 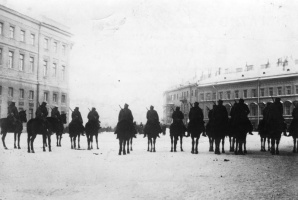