The Palmer Raids were efforts by the United States Department of Justice to arrest and deport suspected leftists and anarchists between November 1919 and January 1920. In response to the growing fear of political radicalism, United States Attorney General A. Mitchell Palmer orchestrated the Raids that resulted in more than 500 deportations.

The United States entered the First World War in 1917 and faced the challenge of garnering support for the war effort among the American people. The Russian Revolution in 1917 and the creation of a communist state in Russia heightened fears of communism spreading within the United States. The resulting Red Scare raised questions over the loyalties of immigrants from enemy nations, as well as those who held membership in radical organizations. The Immigration Act of 1918 expanded the undesirable classes of aliens to include anarchists and redefined anarchists to include aliens who advocated against or held membership in organizations that opposed the United States government. American citizens also faced penalties for opposing the government and war policy under the Espionage and Sedition Acts of 1917 and 1918, which enabled the government to arrest or censure individuals or organizations engaged in activities the government deemed disloyal.

After the war, the government abruptly canceled contracts for war materials, thus resulting in work shortages and decreased wages. Labor conditions worsened as the demobilization of troops further increased unemployment. The labor shortages led to nationwide strikes and increased activity among labor unions. As the strikes increased, so did American fears of a revolution similar to that of the Russian Revolution of 1917. In March 1919, President Woodrow Wilson (1856-1924) appointed Alexander Mitchell Palmer (1872-1936) as U.S. Attorney General. During the war, Palmer had served as Alien Property Custodian and was responsible for the investigation, seizure and administration of enemy assets in the United States. Within three months of his appointment as Attorney General, more than thirty bombs were mailed to government officials throughout the country. These bombings resulted in the destruction of a portion of Palmer’s home and were immediately linked to political radicals. In response to the bombings, Palmer petitioned the U.S. House Appropriations Committee for an increase in resources to investigate subversive activities.

In June 1919, the Justice Department agents raided the offices of a radical organization in Buffalo, New York. The raid resulted in three arrests; however, all three members were released as they were found to be disseminating socialist material, not engaging in violent protests of government policy. As a result of this ruling, Palmer shifted his approach and began focusing on aliens, as the Immigration Act of 1918 identified membership in radical organizations as sufficient cause for deportation, enabling the Justice Department to deport a significant number of alien radicals without the hindrance of trial. Palmer also established the new General Intelligence Division within the Bureau of Investigation under the direction of J. Edgar Hoover (1895-1972), which was charged with investigating radical groups and proving that they were engaged in subversive activities. The first raids occurred on 7 November 1919 - a date selected to coincide with the anniversary of the Russian Revolution - and resulted in hundreds of arrests. These arrests led to 249 deportations that occurred on 21 December 1919 aboard the United States Army transport USS Buford. Among the deportees were the famed anarchists and political activists Emma Goldman (1869-1940) and Alexander Berkman (1870-1936). The second and larger wave of raids occurred on 2 January 1920. Approximately 3,000 people were arrested in more than thirty cities in the United States; many of these arrests were made without warrants.

Although the Justice Department orchestrated the investigations and raids, the Department of Labor was responsible for executing all deportations. Palmer worked diligently to establish a good working relationship with the Department of Labor to coordinate deportations. However, Assistant Secretary of Labor Louis Freeland Post (1849-1928) opened an investigation into the arrests and found the January raids failed to produce evidence of violent subversion among targeted groups. As a result, Post cancelled more than 1,500 deportation orders resulting from the January raids, citing them as illegal. Congressional hearings were initiated to investigate both the raids and the investigations conducted by the Justice Department. At these hearings, Post publicly condemned the actions of Palmer and the use of public fear to garner support for the raids. Post was subsequently threatened with impeachment, but defended the Labor Department’s findings, later calling the raids a “stupendous and cruel fake”. Palmer was unapologetic for his actions and the actions of the Justice Department. In 1921, before a Senate investigation committee, he stated that he believed his actions were for the good of the country.

One of the lasting legacies of the Palmer Raids was the violation of civil liberties as a result of a fear of dissent. The raids were direct violations of First Amendment rights to freedom of speech and freedom of press. The raids also violated the due process clause of the Fifth Amendment, as many individuals were arrested and detained without warrants. As the Red Scare subsided, many Americans realized these fears were unwarranted and became critical of Palmer’s actions. Many of their basic civil liberties had been violated, not by the political radicals believed to be a threat, but by the government charged with protecting those liberties. 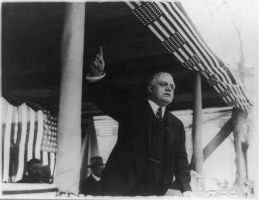