The Red Scare was a period of heightened fear of radicalism in the United States after World War I. Labor unrest, the growth of bolshevism internationally, and a series of bombings triggered a number of government raids on suspected radicals, often in violation of civil liberties.

Even though anti-radical policing dates back to the 1870s and 1880s, the immediate roots of the Red Scare can be traced to the suppression of anti-war elements during World War I. On 7 April 1917, the day after the United States entered the war on the side of the Entente Powers, representatives of the Socialist Party passed the St. Louis Declaration, announcing their continued opposition to the war. They were joined in their anti-war dissent by the International Workers of the World (IWW), a radical labor union.

The federal government quickly put measures into place to quell such opposition, including the 1917 Espionage Act and the 1918 Sedition Act. Together these acts hindered freedom of speech, making it practically illegal to criticize the war or interfere with the war effort in any way. Postmaster General Albert Burleson (1863-1937) used this legislation to censor the press. He revoked the second class mailing privileges of radical publications. The Justice Department indicted a number of prominent Socialists, such as Eugene V. Debs (1855-1926) and Victor Berger (1860-1929), under the Espionage Act. Debs was sentenced to prison for ten years and Berger was denied his congressional seat after being duly elected.

The IWW led a wave of strikes in the summer of 1917 that government authorities interpreted as violating the Espionage Act. In September of 1917, federal agents raided forty-eight IWW headquarters across the country, arresting much of the group’s leadership and forcing the remaining members underground. At the local level, vigilante violence was directed at dissenters and “slackers” who escaped the notice of the federal government.

Following the Bolshevik Revolution of November 1917, anti-war repression of radicals and anti-socialist hysteria slowly began to converge. Americans felt betrayed by the Bolsheviks’ separate peace with Germany and their anti-capitalist ideology. Soaring inflation and high unemployment following the November 1918 armistice and the subsequent demobilization of troops and wartime industries influenced labor unrest and a growing number of strikes.

The IWW instigated one of the largest of these, the Seattle General Strike, in February of 1919. About 60,000 strikers from a variety of industries shut down the entire city. This strike and other labor unrest heightened false fears that America was under assault by socialist agitators. Events taking place overseas only reinforced this fear. In March, the Third Communist International met to proclaim their goal of spreading the socialist revolution worldwide. Meanwhile parts of Europe were suffering from revolutionary unrest and violence.

In April 1919, anarchists sent thirty-six bombs through the mail to prominent politicians and government employees. Soon thereafter, May Day parades in Boston, New York, and Cleveland met with police and vigilante violence. In June 1919, the bombings continued: the most significant of these was a failed attempt on the life of Attorney General A. Mitchell Palmer (1872-1936). Hysteria set in as the public began clamoring for an investigation into the growing red menace, even though the bombs were likely sent by a single Italian anarchist group.

Palmer, partly seeking to further his own political career by capitalizing on public hysteria, requested and received additional funding from Congress to combat the red menace. He created the Radical Division with a young J. Edgar Hoover (1895-1972) at its head, who began planning a roundup of suspected foreign radicals during the summer of 1919 with the goal of deporting them under a 1918 immigration law. The first of the Palmer Raids, which targeted the Union of Russian Workers, took place in November of 1919 and made nearly 1,000 arrests in twelve cities. In December of 1919, close to 250 suspected radicals, including well-known anarchists Emma Goldman (1869-1940) and Alexander Berkman (1870-1936), were deported on the USS Buford, otherwise known as the “Soviet Ark.”

A second series of raids took place in January 1920 across thirty-four cities and resulted in the arrest of more than 4,000 members of the newly formed Communist Party and Communist Labor Party. Flush with victory, Palmer and Hoover began to plan an expansion of their countersubversive program to include the arrest of American citizens pending the passage of a peacetime sedition law.

Reaction to the Raids↑

In the meantime, lawmakers, government officials, and civil liberties advocates had begun to question the legality of the raids which Justice Department agents had conducted with so little respect for due process or constitutional rights. As the growth of communism slowed to a halt overseas and further domestic disturbances failed to materialize it became clear that the red threat had been greatly exaggerated.

The Red Scare was largely over by late 1920, but it had long-lasting and severe consequences. A precedent had been set which sacrificed civil liberties for national security. Immigration policy became increasingly politicized - legislation passed in the early 1920s set quotas designed to deny radical immigrants entry into the United States. And the trope of the red agitator would, henceforth, be used again and again, particularly during the Second Red Scare of the 1950s, to impugn the intentions of any nonconformist seeking to change the political, social, or economic status quo through revolution or reform. 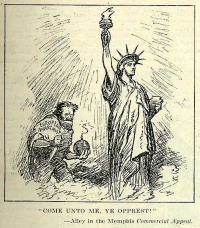