During the First World War, the Bureau of Investigation, a division of the U.S. Department of Justice, became a leading federal agency for the suppression of dissent. Bureau agents collected information for prosecutions under wartime sedition statutes but also extensively employed more informal methods in their efforts to stifle opposition to the war.

Since its creation in 1908 as an agency within the U.S. Department of Justice, the Bureau of Investigation had assumed responsibility for investigating federal offenses, such as violations of the anti-prostitution Mann Act of 1910.[1] In 1912, Alexander Bruce Bielaski (1883-1964), a graduate of the George Washington University law program, took the helm of the bureau, a position he would hold until 1919. Starting in 1917, the bureau, together with the Department of Justice, took the leading federal role in policing war-related violations of law, such as draft evasion and sabotage. However, its most significant wartime role was as one of the chief federal agencies for the suppression of anti-war sentiment.

Crucial to the bureau’s efforts to silence dissent was the Espionage Act of 15 June 1917, which essentially – at least in the minds of most federal prosecutors and judges of the time – made it illegal to openly speak out against the war. A 16 May 1918 amendment, popularly known as the Sedition Act, was even more severe, banning, among other things, “disloyal” criticism of the armed services.

Bureau agents conducted investigations in support of federal prosecutions for violations of these acts. In addition, the bureau engaged in a much more wide-ranging but less publicly-noticed effort to quietly intimidate opponents and skeptics of the war. Bureau detectives personally questioned countless Americans, cautioning them to avoid speaking out against the war. The investigators frequently demonstrated a very expansive sense of what constituted disloyalty, often reprimanding those who had criticized (or had been accused of criticizing) the wisdom or righteousness of America’s military intervention in Europe. Bureau agents chastised those who, allegedly, had badmouthed war bonds or war auxiliaries such as the Red Cross, and sometimes admonished interviewees to more actively support the war effort.

By simply badgering suspects or warning them that they were under surveillance, an agent could avoid conducting the time-consuming inquiries that might be necessary to obtain evidence adequate to convince a jury that someone had violated the law. And certainly, in 1917 and 1918, the bureau was very busy investigating the flood of allegations of subversion that it had received from concerned citizens.

One of the chief targets of the bureau was the left, in particular the Socialist Party and the radical labor union the Industrial Workers of the World (IWW). As the Socialist Party had condemned the congressional declaration of war as being the result of capitalist influence, agents often regarded adherence to socialism as evidence of disloyalty. The Justice Department prosecuted the leaders of both organizations, and the bureau subjected less high profile followers to harassment.

Germans and Other Immigrants↑

Bureau investigators were quick to condemn any immigrant expression of loyalty to Germany. Some agents, too, were suspicious of immigrants in general, with one virulently nativist investigator, L.S. Perkins, fearing that foreigners – and in particular Jews – were fomenting revolution. Pastors, especially those of foreign descent, came under particular scrutiny, as it was feared that they might turn their congregations against the war. The bureau relied on undercover informants to monitor immigrant communities, in one case employing a Swiss immigrant, Werner Hanni (1892-1956), who eavesdropped on sermons delivered by and struck up conversations with ministers of German heritage. Hanni went on to have a long career with the Federal Bureau of Investigation (FBI), eventually stepping down in the 1950s. At the same time, however, some in the bureau seem to have realized that migrants who hailed from Allied nations or whose ethnic homelands were seeking independence from the Central Powers might be inclined to vigorously support the war effort.

The Bureau also did not tolerate criticism of the nation’s racial inequalities, presumably out of concern that highlighting such issues would foster disloyal sentiment among African-Americans. For example, a black candidate for a Chicago judgeship who had allegedly been critical of Woodrow Wilson’s (1856-1924) approach to African Americans was visited by a detective who, in the words of a bureau report, “told him that in these times this office would hold him to account for any statements which would be made of an insulting nature to the president.”[2]

A civilian volunteer auxiliary founded in 1917, the American Protective League (APL), assisted the bureau in its investigations. Reports filed by APL members appear with some frequency within the bureau’s investigative records. The APL ran into controversy in 1918 when it helped coordinate large-scale efforts – known as “slacker raids” – to arrest those who had failed to register for the draft or were otherwise evading conscription. One such roundup, in September 1918 in New York City, netted only small numbers of men who had evaded the draft and resulted in the arrest and detention of thousands who had, in fact, followed the nation’s conscription laws. Congressional critics blasted the raids as repressive, and this controversy probably helps explain why some federal agencies withdrew backing from or assistance for the league, which folded in early 1919.

By the end of the war, the Bureau of Investigation had emerged as a primary federal counter-subversion force. In subsequent decades, it continued to target many of the same ideologies that it had during the war. The agency played a central role in the arrests and deportations of unnaturalized immigrant radicals in the Red Scare of 1919-1920. Under the leadership of John Edgar Hoover (1895-1972), who headed the agency from 1924 to 1972, the bureau spent much of its time and resources monitoring and harassing radical groups as well as organizations that sought to address issues of racial inequality. 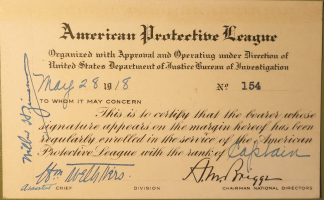 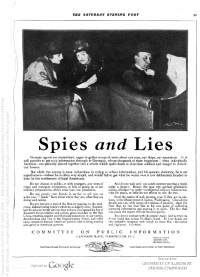 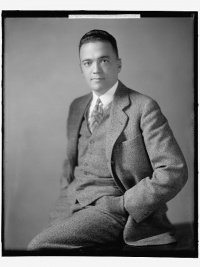