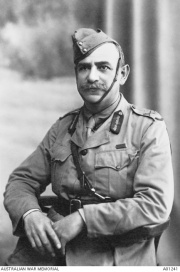 John Monash is probably the most celebrated Australian figure of the First World War. He commanded the 4th Brigade in Gallipoli, the 3rd Australian Division in Belgium in 1917, and the Australian Corps in 1918. A meticulous planner and charismatic leader, he led the Australians during their most significant victories in the final year of the conflict.

Born in 1865 to Jewish parents from East Prussia, John Monash (1865-1931) grew up in Jerilderie, New South Wales, where his father ran a general store. After becoming dux of Melbourne’s Scotch College at the age of sixteen, he graduated from the University of Melbourne with degrees in arts, law, and engineering. A successful career as a civil engineer made him wealthy. By 1914, he and his wife frequented elite Melbourne business and social circles.

For thirty years before the First World War, Monash also enjoyed success in the Citizen Military Forces. In the Garrison Artillery, he was fascinated with the relationship between technology and weapon development. He commanded the Victorian section of the Australian Intelligence Corps, attended courses in military science at the University of Sydney, and was involved in staff work for Lord Horatio Herbert Kitchener’s (1850-1916) visit to Australia in 1909. From 1913, he commanded the 13th Infantry Brigade.

At the outbreak of war in 1914, Monash was made chief censor before being appointed commander of the 4th Infantry Brigade within the Australian Imperial Force (AIF). Monash’s appointment provoked some protest, partly due to his German ancestry, that continued even when he was at Gallipoli, when rumours circulated in London and Cairo that he had been arrested and shot as a spy. Monash downplayed his German heritage from that time on. After Gallipoli, he assumed command of the newly-formed 3rd Australian Division, which arrived in France in November 1916 and fought at Messines and Passchendaele in 1917. At Messines, Monash’s meticulous planning and preparation resulted in him being made Knight Commander of the Order of Bath (KCB) in the New Year’s honours list of 1 January 1918.

Monash was not without his quirks. As his biographer writes, “his chief weakness was his status-hungry craving for publicity and honours, and his habit of exaggerating his men’s and his own achievements”.[1] Monash clashed with Charles Edwin Woodrow Bean (1879-1968), the Australian war correspondent and official historian. Bean appreciated Monash’s capacity as a military commander, but felt that Monash was so ambitious for glory that the lives of Australian troops could not be safely entrusted to him. In early 1918, Bean was misguided enough to plot against Monash, making a bid for command of the Australian Corps. Monash felt Bean was a mediocre war correspondent who had failed in his public relations function in celebrating Australian achievements in France.

What made Monash such a capable commander was his willingness to tap the rich vein of learning and development that had occurred within the broader British Expeditionary Force. He benefited from the latest attack doctrine, ideas, and technologies based on the success and failures of previous engagements. He had infantry, armour, aircraft, and artillery at his disposal, and the good fortune of commanding a recognisably integrated weapons system that characterised much of the fighting in late 1918. In his post-war account, Monash likened the all-arms battle to a symphony, which he had conducted:

A perfect modern battle plan is like nothing so much as a score for an orchestral composition, where the various arms and units are the instruments, and the tasks they perform are their respective musical phrases. Every individual unit must make its entry precisely at the proper moment, and play its phrase in the general harmony.[2]

Monash was made commander of the Australian Corps on 1 June 1918, just as the German Spring Offensive was nearing failure. Forming part of the British Fourth Army, the Australian Corps held a portion of the front astride the Somme River near Villers-Bretonneux, where it prepared to make its own counter-blow: the first, at Le Hamel on 4 July 1918, demonstrated the effectiveness of infantry, armour, artillery, and airpower in attacks with limited objectives. Many of the tactics used at Le Hamel were then used on a much larger scale by the Fourth Army during the Battle of Amiens on 8 August 1918. Striking out towards Harbonnières, the Australian Corps advanced alongside the Canadian Corps and punctured the German positions, advancing twelve kilometres in one day and heralding the start of what became known as the Hundred Days Offensive.

In the attacks, which continued throughout August and September, German resistance stiffened and attacking units took more casualties for less ground. Owing to the diminishing state of the Australian Corps, Monash was offered the chance to slow the tempo of his operations, but he refused. He assessed that the Germans were just about broken, but so too were his men. Despite victories at Mont Saint-Quentin, Péronne, and Bellenglise, Monash’s corps suffered 35,000 casualties in the four months between Le Hamel and the last Australian attack of the war at Montbrehain on 5 October 1918. At times, Monash was ruthless. While pressing attacks towards Péronne and Mont Saint-Quentin, he instructed one of his divisional commanders that “casualties no longer matter”.[3]

Monash forged a reputation as a fiercely independent, capable commander noted for his planning and leadership. But as a corps commander, he was removed from the higher strategic direction of the war. After the Armistice, he was made director-general of repatriation and demobilisation and used his organisational skills to bring home Australian troops. In addition to his KCB, Monash was made Knight Grand Cross of the Order of St Michael and St George and received a host of foreign awards ― something he valued highly. To ensure his place in history, Monash wrote The Australian Victories in France in 1918 (1920), which laid the groundwork for the popular narrative of “Monash-the-war-winner”.

Monash returned to Australia to an enthusiastic welcome in December 1919. In civilian life, he went on to head the State Electricity Commission of Victoria and became vice chancellor of the University of Melbourne. He was one of the principal organisers of the annual Anzac Day commemorations in Melbourne and oversaw the planning of the Shrine of Remembrance. He was promoted to full general in 1929. Monash died of a heart attack on 8 October 1931 at age sixty-six. 300,000 mourners attended his state funeral. He is buried at Brighton General Cemetery, Victoria.

Monash looms large in Australian memory of the First World War, with popular writers inappropriately portraying him as the “the outsider who won the war”. Despite claims that his achievements have not received adequate recognition, there are universities, roads, bridges, and towns in Australia that bear his name, he appears on the Australian $100 note and statues of him feature in Melbourne and Canberra. There are no less than eight books on his life and wartime experiences. Monash’s papers are held at the National Library of Australia and Australian War Memorial, Canberra. 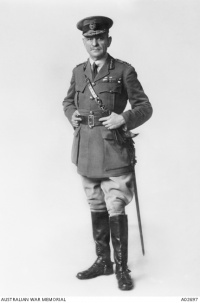