In July 1917, economic chaos and unpopular preparations for military action provoked armed demonstrations by workers and troops demanding the Petrograd Soviet take power from Russia’s Provisional Government. The uprising failed and reprisals were unleashed against its Bolshevik leaders, who quickly gained fresh support among the radicalised urban masses.

On 3 and 4 July 1917 (16 and 17 July 1917) armed anti-government demonstrations erupted in Petrograd against a background of deepening wartime economic dislocation and social polarisation. The revolution that had toppled Nicholas II, Emperor of Russia (1868–1918) in February 1917 had ushered in the "Dual Power" of the Provisional Government of liberal intellectuals and industrialists, forged out of the dissolved Russian parliament (Duma), and the Petrograd Soviet of Workers’ and Soldiers’ Deputies, a council dominated by moderate socialists of the Menshevik and Socialist Revolutionary parties. The Soviet commanded the loyalty of troops and workers but, influenced by concern for national unity and a belief that the time was not ripe for socialist power, pledged to support the Provisional Government provided it enacted certain reforms.

However, distrust of the Provisional Government and fears of a counterrevolution by the propertied classes were fanned among the labouring population by the liberal Kadet Party’s support for expansionist war aims, by rumored evacuations of militant factories, and by spiraling inflation. The spectre of mass unemployment was blamed on the government’s reluctance to impose regulation and on sabotage by factory owners. Radicalisation among the urban masses translated to swelling support for the Bolsheviks and their irreconcilability with the government, capitalists, and war. By July the Bolshevik party had a majority in the Workers’ Section of the Soviet and its resolution in favour of transferring all power to the Soviet was passed by a Conference of Factory Committees. Support for the Mensheviks remained high among printers and for the Socialist Revolutionaries among unskilled workers, but when moderate socialists sponsored a demonstration on 18 June (1 July) as a show of unity and support for the government, in which some of them were now ministers, many in the crowd held up Bolshevik slogans advocating Soviet power.

On the same day as the 18 June (1 July) demonstration, the government launched an offensive on Russia’s southwestern front with patriotic fanfare. Petrograd’s upper and middle classes and some frontline units greeted the campaign and its initial successes enthusiastically, but victory soon turned into unruly retreat. Arrangements for the offensive, moreover, such as restoration of the authority of officers to use force against insubordinate troops and the loss of the rights of elected soldiers’ committees to remove commanders or interfere with battle orders, generated widespread unrest. The urban masses were outraged by the apparent collapse of the search for collective peace, the threat of frontline duty for regiments in the capital in violation of government guarantees, and signs of counterrevolution in the restoration of military discipline.

The July demonstrations coincided with a cabinet crisis in the Provisional Government. Six Kadet party members resigned on 3 July (16 July) amidst wrangling over agrarian policy and the decision to recognise a Ukrainian government. Historian Alexander Rabinowitch maintains that the uprising originated before this crisis, in plans as early as 1 July (14 July) by the First Machine Gun Regiment for an armed protest against orders to transfer men and guns to the front.[1] Unrest had been escalating since 18 June (1 July) among sailors at the Kronstadt naval base just outside Petrograd and the capital’s workers. There was outrage at the government’s raid of the anarchist headquarters at the Durnovo villa and localised incidents, such as the liberation of former tsarist naval officers from Kronstadt prison, wage disputes, and suspicions of speculation in the price of meat.

On 3 July (16 July) soldiers of the First Machine Gun regiment passed a resolution to take to the streets that afternoon. They elected a Provisional Revolutionary Committee, which sent guards to occupy stations and bridges and authorised the confiscation and arming of civilian and military vehicles. Emissaries went out to galvanise support in hastily organised mass meetings. Some regimental and factory committees rejected the plans, while others pledged neutrality. But by evening tens of thousands of workers, particularly from the Vyborg district and the Putilov works, were marching alongside military battalions to the Tauride Palace, seat of the Soviet Executive Committee. The Kronstadt sailors joined them on 4 July (17 July). The crowds clamoured for the Executive Committee to assume sole power and arrest the capitalist ministers in the government. In a notorious episode, demonstrators briefly seized the Socialist Revolutionary Minister of Agriculture, Viktor Mikhailovich Chernov (1873–1952), demanding he take power when it was given to him.

Historians differ over whether the demonstrations were a peaceful protest or violent uprising. The demonstrators’ artillery remained silent at the Tauride Palace. Shots exchanged in street clashes between marchers and members of the upper classes and supporters of the Provisional Government, however, left perhaps 400 dead or wounded. Historian David Mandel focuses on the aims of the workers, claiming that they did not intend violence, but rather employed it as self-defence against provocateurs who fired along their routes. The marchers, who included women and children, believed Soviet leaders would be forced to take power by moral pressure alone. Rabinowitch disputes the argument that this was a peaceful protest movement. He points to demands by the First Machine Gunners, influenced by Anarchist-Communists, for the overthrow of the government. Further, he attributes the street fighting to the influence of excitable and heavily armed demonstrators intent on shooting the bourgeoisie, as well as blaming provocateurs, right-wing elements, and prevailing panic. Some historians, such as Richard Pipes, view the demonstrations as an early attempt by Vladimir Lenin (1870-1924) and the Bolsheviks to rally an armed mob for the purpose of taking power. However, social historians question the emphasis on Lenin’s political manoeuvring, which is not consistent with Rabinowitch’s examination of wavering and divisions in Bolshevik organisations. Months of Bolshevik anti-government agitation contributed to the uprising. Rank-and-file Bolsheviks and radical members of the party’s Military Organisation and Petersburg Committee encouraged participation. Lenin and the Central Committee, however, were unsure of the strength of their support and, having already aborted plans for an armed demonstration on 10 June (23 June) as premature, urged restraint. Only in the early hours of 4 July (17 July), as workers and soldiers filled the grounds of Bolshevik headquarters, did the party leadership announce they would henceforth coordinate the action as a peaceful, though armed, movement for Soviet power, leaving open the question of a forceful seizure should Soviet leaders not acquiesce.

Members of the Soviet Executive Committee reassured the crowds besieging the Tauride Palace that they were considering the question of government. However, most members opposed the seizure of power without confirmed support from the provinces, lest it spark civil war. As deliberations dragged on, demonstrators dispersed and military units materialised to defend the Soviet. The collapse of the demonstrations and the decision by previously neutral regiments to come out against the rebellion can be explained by several factors, variously emphasised by observers and historians. These include demoralisation at disorganisation and violence on the streets; the Soviet’s refusal to fulfill the hopes placed in it; the Provisional Government's disclosure of documents suggesting Lenin might be working for the German General Staff; and the news that troops had been requested from the front to end the protests.

The immediate impact of the failed July uprising was reaction against Bolshevik forces. Government troops ransacked the premises of the party’s Central Committee, district offices, and their printing shop; they also disarmed and arrested workers, soldiers, and sailors they suspected of involvement. Lenin escaped into hiding but other leading Bolsheviks were jailed. Anti-Bolshevik propaganda aggravated both popular disillusionment with the uprising and reprisals directed at Bolshevik supporters. However, government plans to disband unreliable regiments remained unfulfilled, and Bolshevik organisations soon resumed activity. Indignation at the party receded as the reconstituted government proved unable to resolve social and economic breakdown and flirted with military dictatorship during the Kornilov Affair in August. The lasting legacy of July was to demonstrate the irrelevance of the Provisional Government in the eyes of many; destroy hopes that the Soviet would peacefully assume power; place dictatorship, rightist or proletarian, firmly on the agenda; and confirm to the Bolshevik leadership the necessity of winning control of the Soviet and thoroughly organising any future offensive against the government. 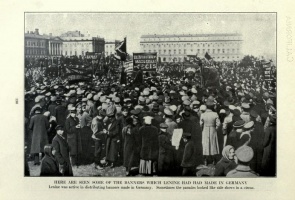