The battles of Isonzo represented Italy’s main offensive efforts against the Austro-Hungarian Empire during World War I. The eleven battles took place between 1915 and 1917 along the Isonzo River in northeastern Italy. The results were usually high losses on both sides without relevant strategic results.

After the start of Italian military operations on 24 May 1915, the commander in chief General Luigi Cadorna (1850-1928) decided to prepare a wide and massive offensive. The primary objective was to drive the Austrians away from their main defensive line. However, the enemy’s resistance proved to be stronger than expected and prevented the Italians from implementing their initial plan of an easy advance to Ljubljana. In fact, the Italians suffered from poor logistics and a lack of modern weapons, like machine guns. The artillery proved to be inefficient in the first phase of war, consisting of around 2,200 pieces, mostly light 75mm guns. Ammunition and machine guns were also in low supply early in the war; this problem was only resolved in 1916. Cadorna mistakenly thought he could compensate these weaknesses with numerical superiority and soldiers’ motivation.

The first attack started on 23 June 1915 with the artillery hitting the Austrian defenses and the 2nd Army moving towards Gorizia, while the 3rd Army tried to move towards the Carso plateau. The Italian artillery proved inadequate on this occasion, with short artillery barrages due to the lack of ammunition. A breakthrough was therefore impossible. Thus, Cadorna decided to focus all his efforts on the conquest of Gorizia and strengthening the southern part of the front towards Trieste. This decision was senseless from a strategic point of view, but represented the ideal symbolic aim to gain popular support for the war. These attempts continued until December 1915. The artillery’s inefficacy, difficult terrain and the predictability of the Italian attacks represented the biggest liability for Cadorna’s plans.

Deserters, Losses and Stabilizing the Front↑

Deserters represented an important factor during the first assaults; the high losses led many soldiers to escape when a new offensive was about to start, thus giving the Austrians important information on the Italian plans. On the other side of the front, the Austrians could not take advantage of high Italian losses because their numerical inferiority and the damages from Italian artillery prevented them from organizing any successful counterattack. In the wider context, French General Joseph Joffre (1852-1931) realized that no major breakthrough was possible on the Italian front. Notwithstanding that, he encouraged the offensive efforts of Cadorna in order to keep the Austro-Hungarians under pressure.

The Wave of 1916 and the Conquest of Gorizia↑

The armies on both sides suffered significant losses during 1915 and used the first months of 1916 to reorganize and strengthen their positions. The Austrians reinforced their trenches on the Carso plateau and at the Gorizia bridgehead. Concrete and iron structures replaced previous rock-based protections. Furthermore, they planned to use poison gas for counterattacks. On the Italian side, Emanuele Filiberto di Savoia, Duca d’Aosta (1869-1931) and commander of the 3rd Army, was now in charge of any offensive against Gorizia. The artillery was reinforced with training and supplies that consisted of 2,200 light and medium guns and around 2,200 heavy guns; the infantry adopted light machine guns. The intelligence was also improved.

The Conquest of Gorizia↑

After a first clash in April 1916, in which both sides used land mines and the Austrians used gas, a major goal was achieved with the sixth battle. On 6 August 1916, for the first time since the beginning of the war, the Italian 3rd Army managed to surprise the Austrians and forced them to abandon Gorizia, occupying it on 10 August 1916. The victory was obtained thanks to important improvements: the massive use of heavy trench mortars and the sheer numbers, totaling 300,000 men, overwhelmed Austrian defenses. With the occupation of the city and the important Mount Sabotino, the Italians were able to control the area. However, the surrounding territory did not offer important strategic targets and generated a new stalemate. All Cadorna’s attempts to exploit the breakthrough and extend the offensive towards the hills surrounding the city ended in failure. Notwithstanding that, Cadorna attacked from other sectors of the front, trying to achieve better positions on the Carso plateau. With further battles in October and November 1916, the Italians managed to secure advantageous positions at the price of terrible losses. The Italians also used gas grenades to clear their way. At the end of 1916 the Austrians retreated into a difficult terrain in which building fortified lines was difficult, worsened by continuous exposure to the Italian artillery.

The Failed Breakthrough of 1917↑

Changes in the War Theatre↑

Notwithstanding the difficulties, the Austro-Hungarian forces managed to strengthen their fortified trenches, improve the supply lines and obtain reinforcement. The Italians reinforced their positions and improved their forces too, looking for a decisive victory. However, in 1917, their potential did not seem to reach the strength needed to achieve victory. In addition, the Austrian advance on the Alpine front opened the possibility of an attack on the back against the Isonzo line. Furthermore, the crisis of the Eastern Front made it possible for Austria and Germany to move troops to other theatres. Thus, Cadorna disengaged from the plan of a coordinated offensive with the Allies of the Western Front and postponed the next offensive to a moment in which he thought the enemy could not get any help.

In 1917 the conditions of the Italian army improved again, allowing Cadorna to deploy more than 8,000 guns, half of which were heavy artillery and trench mortars. He took the Austrians by surprise with an attack on 19 May 1917. However, the Italians’ initial advance faced an unexpected counterattack that thwarted any achievement and provoked 164,000 losses. Cadorna and his staff tried again in August 1917 with an attack against the plateau of Tarnova, through the Bainsizza. This time, the offensive ended in a partial success and crushed the Austro-Hungarian defenses. However, the Italian men and equipment did not allow a continuation of the attack. At the end of August 1917, after the eleventh battle of Isonzo, the Italian forces were in the position to launch a further offensive towards Trieste, but unable to carry it out. On the other side, the Austrian lines were destroyed and unable to provide any relevant resistance in case of another attack. This resulted in a stalemate with the Austrians forced to ask the Germans for help and prepare an offensive.

The eleven battles of Isonzo cost a total of 728,754 lives to the Italian and the Austro-Hungarian armies. Compared to the situation at the beginning of the war on the Italian front, there was a penetration of five to twenty-five kilometers into enemy territory. The only gain, the city of Gorizia, ended up as a political rather than a strategic victory. Cadorna’s doctrine of using massive infantry assault preceded by artillery proved to be expensive and ineffective, even against an enemy that was inferior in number.

Consideration on Italian Lack of Preparation↑

Although Italy entered the war after the fighting in Europe had gone on for a year and was aware of how warfare had changed, the Italian army continued to insist on conducting massive frontal assaults for two and a half years. Partial changes were implemented in 1916, with an improvement in strategies and equipment, but the results were partially frustrated by similar enhancements and the reinforcement of defensive installations on the Austrian side. Overall, the Italian army found itself in a convenient position for a decisive victory only when men and equipment were too exhausted, giving the enemy the chance to take initiative. However, Cadorna shared similar mistakes and flaws in his war conduct as his Allie counterparts Joffre and Douglas Haig (1861-1928) did and, on a final note, his command was no worse than theirs. 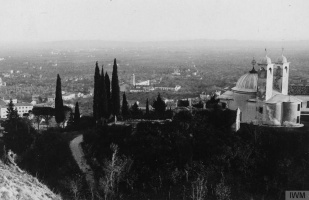 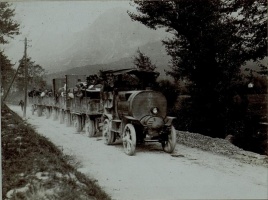 Population evacuation/expulsion on the Isonzo front 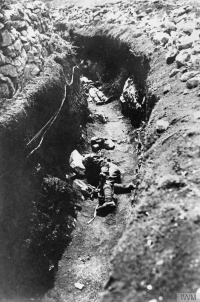