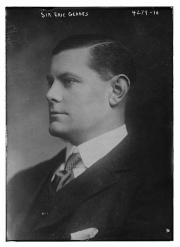 Eric Geddes was the most prominent example of Britain’s deployment of businessmen in government. He was the driving force behind the reorganization of the British Expeditionary Force’s (BEF) logistics on the Western Front and the political head of the Admiralty in the final eighteen months of the war.

The son of a Scottish civil engineer, Eric Campbell Geddes (1875-1937) was a directionless youth more interested in rugby football than education. He attended a series of British public schools before gaining employment first in the United States and then in India. Geddes joined the North-Eastern Railway (NER) in England in 1904. By 1914, his drive, energy, and aptitude had seen him promoted to the role of deputy general manager of the NER, and rewarded with the highest salary of any senior executive of a British railway company.[1]

In September 1914, Geddes was responsible for the raising of a battalion of men, the 17th (Service) Battalion, Northumberland Fusiliers (NER Pioneers) from among the NER’s employees. It was not until the following June that Geddes was able to take a direct role in the British war effort. As a deputy director of munitions supply at the Ministry of Munitions under David Lloyd George (1863-1945), Geddes helped increase production of rifles and machine guns, before in December 1915 he became responsible for the new national filling factories. His work in this role was rewarded with a knighthood in 1916.

Geddes was sent to France to report on the transport situation facing the British Expeditionary Force (BEF) in August 1916. After a brief tour, Geddes recommended an overhaul of the British logistical organization and the creation of a new staff officer at General Headquarters styled the director-general of transportation. Geddes was asked to head the new directorate by Sir Douglas Haig (1861-1928), and to act as director-general of military railways at the War Office by Lloyd George. In this unique dual role, Geddes’ key achievements were the construction of a 1,000 kilometre light railway network to improve supply to the BEF, and the integration of the ports, railways, roads and canals that served the Western Front. Geddes’ contribution to the “general excellence” of the BEF’s transportation was recognized by Haig in his final despatch of the war in 1919.[2]

In May 1917, Geddes became controller of the navy before he was installed as First Lord of the Admiralty by Lloyd George on 6 July. In this role, Geddes assisted in the implementation of a convoy system to combat the German submarine menace, and was instrumental in the dismissal of the First Sea Lord, Admiral Sir John Jellicoe (1859-1935), in December 1917. Following Jellicoe’s removal, Geddes requested a return to transport duties, but was denied the opportunity to coordinate the movements of allied manpower and material on the Italian Front. He spent the last year of the war reorganizing the board of the Admiralty, and on missions to Italy, north Russia and the United States.

Following the war, Geddes remained in government until 1922, first overseeing the demobilization of British troops, then as Britain’s first minister of transport, and finally as chairman of the committee on national expenditure that oversaw a retrenchment in public spending that became known as the “Geddes Axe”. Geddes’ post-war interests included working as chairman of Dunlop Rubber Company and as part-time chairman of Imperial Airways. He died following a long illness in June 1937. 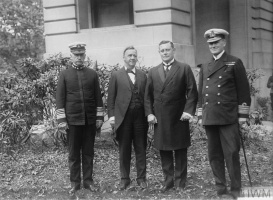 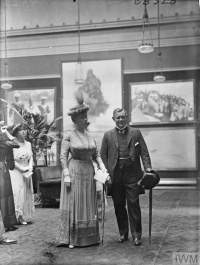 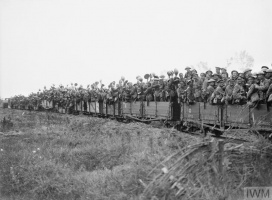