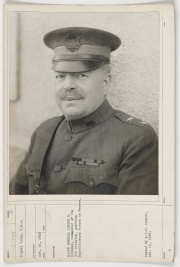 Joseph Theodore Dickman (1857-1927) was born on 6 October 1857 in Dayton, Ohio. After graduating from the U.S. Military Academy in the Class of 1881, Dickman was commissioned into the U.S. Army cavalry with an assignment to serve in the 3rd Cavalry. For the next thirty-five years his military assignments took him to many of the wars, insurgencies and other domestic and international hotspots in which the U.S. found itself engaged as a constabulary force and in various other capacities during the late 19th and early 20th centuries. Among Dickman’s many military postings across those decades, he participated in operations against the Apache in the southwestern United States in pursuit of Chiricahua leader Goyaałé (1829-1909), (Geronimo) campaigned along the country’s southern border in efforts to increase security there during the course of unrest related to the Garza War that swept across the Rio Grande River between Mexico and the United States, fought in Cuba in the 1898 Spanish-American War and served in the Philippines during the subsequent Philippine War. He also participated in U.S. operations in China during and immediately after the unrest resulting from clashes between the Chinese government and foreign powers stationed in China. Success in these duties propelled Dickman to a turn of the century army general staff assignment as lieutenant colonel. Dickman also benefited from a number of professional military education assignments as a student and instructor, including an Army War College faculty tour. Through these academic opportunities Dickman gained expert knowledge about various operations, technological developments and other topics of importance to the U.S. military at that time.

When war engulfed Europe in summer 1914, Dickman was on service as U.S. army inspector general, a posting that provided an opportunity to evaluate the state of readiness of various army units. He then proceeded, as a colonel, to Vermont where he commanded the 2nd Cavalry Regiment, whose troops were the first U.S. soldiers to set foot in Europe during World War I. The experience and reputation Dickman gained in his command and staff positions placed him in good stead once the U.S. declared war on Germany in April 1917, and the following month he was promoted to flag rank as a brigadier general.

Another advance in rank soon followed, with Dickman promoted to major general in the national army that August in preparation to command the 85th Infantry Division in Kalamazoo County, Michigan. With the newly-activated 3rd Division making preparations for an imminent deployment to the Western Front, Dickman took command of this division late in 1917 and led its deployment to France in March 1918 as part of a growing American Expeditionary Forces (AEF) presence in that country. Just two months later the 3rd Division with Dickman as its commanding general fought in some of the AEF’s first large-scale combat operations. Germany’s Spring Offensive resulted in the 3rd Division halting at the Marne River in the Battle of Château-Thierry in May 1918. Six weeks later the Second Battle of the Marne resulted in considerable renown for Dickman when elements of the 3rd Division held fast along the south bank of Marne River in the face of a determined German amphibious assault that included support from gas attacks and heavy artillery bombardment. The 3rd Division thus gained the nickname “Rock of the Marne”, an appellation the division bears to this day, in recognition of its gallant stand that contributed to a signal victory by the U.S. and its partners at Second Battle of the Marne. Their triumph inflicted a crushing defeat on Germany’s intended river crossing and continued advance. So decisive was their combined success - in addition to the 3rd Division and other AEF units, British, French, and Italian forces also took part in the battle - that Germany never again undertook significant offensive operations for the remainder of the war.

That September, Dickman’s IV Corps successfully fulfilled its mission in the St Mihiel offensive, a decisive Franco-American victory that completely overwhelmed a large salient previously in German possession for nearly four years, in the process capturing thousands of German prisoners and hundreds of German guns. U.S. military officers who fought in Dickman’s IV Corps at St Mihiel and later went on to international fame included Douglas MacArthur (1880-1964) and George S. Patton, Jr. (1885-1945). After the triumph at St Mihiel, Dickman continued in IV Corps command, and then transitioned to I Corps, a command in which he helped attain victory during the deadliest battle in U.S. military history, the Meuse-Argonne campaign of September to November, 1918. In this battle, the AEF suffered heavy casualties while forcing a German retreat beyond the Meuse River, which allowed I Corps and other participating units to advance on important rail infrastructure key to German positions in France. German defeats at St Mihiel, Meuse-Argonne, and elsewhere along the Western Front compelled Germany to sue for peace, with hostilities ending on 11 November 1918. Immediately after this armistice, Dickman took command of the newly-activated U.S. Third Army, which he led into Germany to control access across the Rhine River as part of the occupation force there, where he remained until April 1919. Patton, who fought with Dickman in the victorious St Mihiel campaign, later served as Third Army commander during its return to the Rhine some twenty-six years later. Dickman was awarded the Distinguished Service Medal in recognition of his military leadership during World War I.

In 1921, after participating in a project focused on lessons to be learnt by the army from its World War I operations, Dickman retired from permanent grade of major general after more than four decades of military service, including World War I combat command at divisional and corps levels, and command of an army during occupation duty. He later returned to active service to assist in the U.S. post-war military drawdown.

Dickman published The Great Crusade: A Narrative of the World War, memoirs recounting his experiences in that conflict, in 1927, the same year in which he died as a result of cardiac-related health issues shortly after turning seventy. He was laid to rest in Arlington National Cemetery. The USS Joseph T. Dickman, an attack transport vessel in naval service named in the major general’s honor, participated in several World War II campaigns, including support for Allied invasions at North Africa, Normandy, Okinawa, and many others, a fitting tribute to his long and distinguished military service around the world. 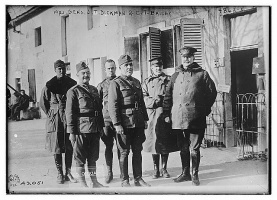 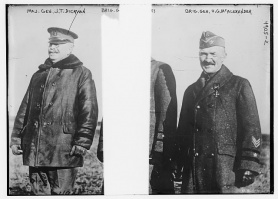 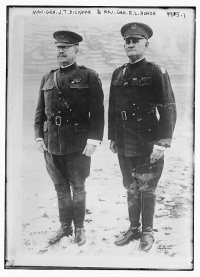