Amphibious Raids on Ostend and Zeebrugge

On the night of 22-23 April 1918, the Royal Navy attacked the German occupied towns of Ostend and Zeebrugge in an effort to block the canals that linked the two cities to the German naval base at Bruges.

The German Position in Flanders↑

When the fighting on the Western Front settled into a stalemate in the late fall of 1914, the Germans occupied nearly all of Belgium, including a series of vitally important harbors at Ostend, Zeebrugge, and Bruges. This position resembled a triangle, with the coastal cities of Ostend and Zeebrugge connected to Bruges, a larger inland city and the major German naval base in Flanders, via a series of canals. Admiral Ludwig von Schröder (1854-1933), the commander of the Marinekorps Flandern, the German force that occupied this portion of Belgium, quickly realized that these bases could be used by torpedo-boats and submarines to strike at the British in and around the English Channel. The Germans referred to this position as the “Triangle”, and developed it into a major base by 1917. During the unrestricted submarine campaign of 1917 these harbors sheltered smaller coastal submarines (the UB class) and a class of minelaying submarines (UCs) as well as a flotilla of torpedo boats. Submarines based out of these harbors sank roughly a third of all the ships that were destroyed in the unrestricted campaign. To protect their investments, the Germans defended the area with an extensive array of artillery pieces.

The Royal Navy was acutely aware of the dangers posed by the “Triangle”. Starting in the fall of 1914 the British force that was responsible for the defense of the eastern English Channel, the Dover Patrol, sought ways to limit or destroy the German threat. One option was to attack the coastline with monitors and destroyers. The British bombarded the Flanders coastline several times in the first year of the war but failed to inflict any serious damage. Eventually the Germans deployed so many guns along the coastline that the Royal Navy discontinued the bombardments. However, the losses Britain endured in the first months of the unrestricted submarine campaign led to panic and desperation in the Royal Navy so the British began searching for other ways to neutralize the Flanders harbors. They came up with the idea of sinking old cruisers filled with cement inside the canals that linked Ostend and Zeebrugge to Bruges. If those canals could be blocked, the German base in Bruges would be rendered useless. When Rear Admiral Roger John Brownlow Keyes (1872-1945) took over command of the Dover Patrol in January 1918 he decided to act on this idea.

Keyes created an ambitious plan in which two forces, one consisting of two old cruisers and several motor launches and a second consisting of three old cruisers, several ferries, and additional motor launches, would attack the two harbors. The first force would try to block Ostend and the second would strike at Zeebrugge. Each force was also accompanied by a number of monitors which would attempt to suppress the German defenses with gunfire. The motor launches were to lay down a smokescreen that would protect the advancing forces from the German coastal artillery while the cruisers sailed for the respective canal entrances. If the latter were able to reach the canals, they were to be scuttled, thereby blocking the canals. At that point additional motor launches would move in to take the crews off the cruisers. The entire operation was to be screened to the east by four cruisers, two destroyer leaders, and two divisions of destroyers from the Harwich Force. These forces would try to keep any German forces coming from Wilhelmshaven or the other German home bases from interfering in the operation.

The attack on Zeebrugge was the more difficult of the two. This was due to the existence of a substantial breakwater, referred to as a mole, in that harbor. The Germans had placed additional guns along the mole precisely to prevent what the British were trying to do. These guns were to destroy any enemy force trying to enter the harbor. If the British plan was to succeed, those guns had to be neutralized. To accomplish this Keyes planned to assault the mole itself. Another old cruiser would sail up to the mole and drop makeshift bridges that would allow a force of 200 sailors and 600 marines to land, destroy the guns, and then re-board the cruiser and escape.

The operation took place on 22 April 1918. At Zeebrugge things initially went according to plan. The motor launches began laying their smokescreens and the bombardments began shortly after 11 p.m. (GMT). The smokescreens were extremely effective until strong winds blew in around 11:50 p.m. and began dispersing them. Until that point the British cruisers had been able to close in unmolested. With the dispersal of the smoke, the German defenses quickly engaged. The British forces did reach the mole, however, and began their assault roughly at midnight. The Germans rallied quickly and pinned the British forces down. As a result the British were unable to destroy the German guns on the mole. The German defenders however, could not man them either because of the ongoing firefight. These developments allowed two of the three cruisers to reach the canal entrances, where they were indeed scuttled. The British crews were rescued and the remaining British forces departed. They had lost 170 men and 400 were wounded. An additional forty-five were missing. The German losses were far lighter. Only eight men were killed with sixteen wounded. Despite the losses Keyes and his men left Zeebrugge convinced that they had succeeded.

At Ostend things did not go as well. Unbeknownst to the British, the Germans had moved the light buoys that marked the deep channel approach to the canal entrance one mile to the east the previous night. This was a regular defensive measure that was carried out periodically but which the British were unaware of. They assumed the buoy still marked the appropriate channel and therefore the two cruisers ran aground well east of the canal entrance. The motor launches, despite very heavy German gunfire, moved in and rescued the crews but the Ostend canal remained unblocked. The British made two additional attempts to block that canal in May but both failed.

The raid took place at one of the darkest times in the war for the Entente powers. The Germans were in the midst of their 1918 offensives on the Western Front and there was real concern on the Entente side that they might yet lose the war. The raids, particularly the one on Zeebrugge, were considered a great feat of British arms and heroism. They provided a badly needed boost to morale and Keyes claimed that they had indeed blocked Zeebrugge. The British exploited the “heroes of St. George’s Day” and claimed they had “twisted the dragon’s tail” by attacking the Germans on their doorstep and depriving them of a valuable naval base. The raids did therefore provide a boost to British and Entente morale at a key moment in the war. In reality, though, the raid was at best a mixed success. The failure to block the canal at Ostend meant that the smaller UB and UC class submarines could still reach the sea. Larger submarines, as well as the torpedo-boats based in Bruges, were temporarily prevented from reaching the North Sea but the Germans acted quickly to dredge channels around the blockships and by 14 May, the canal was once again useable by all the German forces in Bruges. Ironically, the canal was permanently blocked later in the war; in a simple coastal bombardment on 9 June, British forces scored a lucky hit on the lock gates of the canal, mangling them beyond repair and rendering the Zeebrugge canal useless for most of the remainder of the war. In the end, the Zeebrugge canal was blocked, but that blockage was not the result of the famous April raid. That raid failed to prevent the Germans from using the “Triangle”, though it did provide a badly needed morale boost for the Entente. 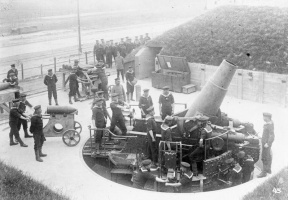 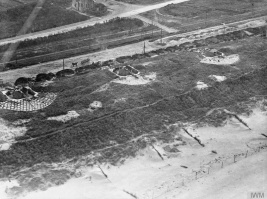 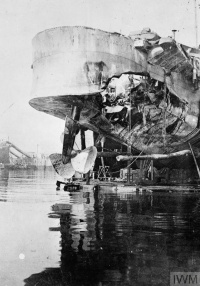 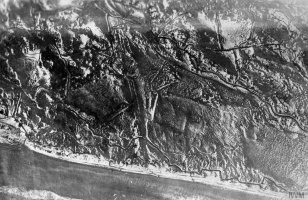 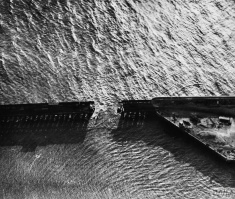 The gap in the mole at Zeebrugge 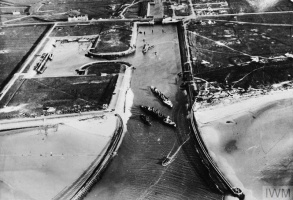 Zeebrugge after the raid