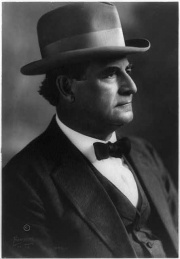 Williams Jennings Bryan was a powerful Democratic politician, from his emergence on the American political scene in the 1890s to his death in 1925. A three-time Democratic nominee for president, Bryan served as secretary of state under President Woodrow Wilson from 1913–1915. Bryan also championed reform causes based in religion, such as prohibition and fundamentalism.

William Jennings Bryan (1860-1925), a leader of the American populist movement and a dominant force within the Democratic Party, was born on 19 March 1860 in Salem, Illinois. Throughout his decades-long political career, Bryan repeatedly championed populist causes such as the free coinage of silver, a national income tax, and the direct election of senators.

Bryan became active in the Democratic Party after he moved to Lincoln, Nebraska, in 1887. He served as Nebraska’s representative to Congress from 1891–1895 and mounted an unsuccessful campaign for the U.S. Senate in 1894. In 1896, 1900, and 1908 Bryan secured the Democratic nomination for the presidential race, but failed to win the presidency in all three elections.

Bryan’s commitment to peace predated his tenure as secretary of state. In 1903 he met with the prominent pacifist Leo Tolstoy (1828–1910). He was also a leading figure in the international peace movement in the first decade of the 20th century. Bryan attended several international peace conferences, and in June 1910 a peace conference held in Edinburgh, Scotland, endorsed his peace plan of bilateral treaties.

Nomination as Secretary of State↑

Bryan’s prominence among Democratic Party leaders was integral to Woodrow Wilson’s (1856–1924) decision to appoint him as secretary of state in 1913. Bryan’s appointment continued the tradition of presidents naming party leaders to important positions in the federal government. Upon accepting the secretary of state position, Bryan inherited a State Department with 157 employees in Washington, 400 more in embassies and consulates abroad, and a budget of a little over 5 million dollars.

Early in his tenure as secretary of state, Bryan formulated a system of bilateral treaties (influenced by his previous meetings with Tolstoy) that would require participating nations to submit any quarrel to an investigative committee and refrain from armed conflict for one year after doing so. El Salvador was the first of thirty nations to sign one of Bryan’s treaties, followed by every nation in Europe except Germany and Austria-Hungary.

Throughout his time as secretary of state, Bryan insisted that the United States maintain strict neutrality in order to remain an honest arbitrator in negotiated peace settlement. He called on Americans to remain neutral, and he attacked American businesses that traded or loaned money to the belligerent nations. Unlike many Americans and politicians, Bryan refused to condemn German aggression. So committed was Bryan to American neutrality that when the American citizen Leon Thrasher (1884–1915) died in the German U-boat attack on the Falaba, he blamed Thrasher’s death on poor judgment. He also condemned the British blockade as an evil equal to German U-boat attacks.

The 7 May 1915 sinking of the Lusitania, a British passenger ship with Americans aboard, was the event that ultimately severed the relationship between Bryan and Wilson. Bryan speculated that arms and ammunition had been on board the vessel. Bryan signed a harshly-worded letter demanding that Germany abandon submarine warfare or guarantee to protect the lives and property of neutral nations. He also advocated in equally harsh language that Britain’s blockade be condemned. Bryan suggested that the president warn Americans against traveling on the ships of warring nations. Wilson refused. Throughout the rest of May Bryan feverishly sought to halt fighting in Europe and to secure the United States’ continued neutrality.

Citing irreconcilable differences with Wilson, Bryan resigned from his post as secretary of state on 8 June 1915. As a private citizen he continued to call for a peaceful solution to the European conflict and to oppose America’s entry into the First World War. After the United States severed ties with Germany in 1917, Bryan joined more radical antiwar activists to endorse a national referendum on whether America should enter the war. After Congress approved a declaration of war, however, Bryan changed course and offered Wilson his support in the war effort. Deeply committed to democracy, Bryan felt he could no longer oppose America’s entry into the First World War in the face of extensive popular support.

Bryan committed the last decade of his life to promoting moral reform and defending evangelical Christianity. While he had long supported the temperance movement, after 1915 he devoted more of his energy to promoting the prohibition of alcohol. Bryan’s last moment in the public eye occurred in 1925 when he acted as a special prosecutor in the famous "Scopes Monkey Trial" in Dayton, Ohio arguing to uphold the state law that excluded evolution from being taught in public schools. Bryan died five days after the trial ended, on 26 July 1925. 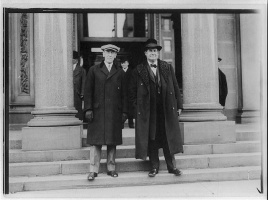