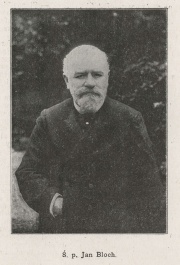 Jan Bloch was an entrepreneur, social activist and pacifist. At the end of his life, he published a comprehensive work in which he predicted the course and consequences of World War I. He warned of the dangers of a total, destructive war and urged countries to strive for the peaceful settlement of international disputes. He participated in the First Hague Peace Conference and founded the Museum of War and Peace in Lucerne.

Jan Gotlib Bloch (1836-1902) was born into a poor Jewish family, one of many children. When he was fourteen, he moved to Warsaw to find a job. Working as an office boy and later as a bank clerk, he struggled to pay for his education. In 1851 he converted to Calvinism, and soon after that to Catholicism. After graduating from secondary school in 1856 he left for St. Petersburg to try his hand at building Russia’s first western railway, from Petersburg to Warsaw. He wisely took advantage of Russia’s new economic policy; a few years later he returned to Warsaw a millionaire and trustworthy entrepreneur. He opened a bank, bought a presentable house and married Emilia Kronenberg (1845-1921), niece of the richest financier of the Polish Kingdom, Leopold Kronenberg (1812-1878). Bloch continued his railway investments and set up a stock enterprise to administer railways in the European part of Russia. He invested in industry and insurance, participated in the creation of banking and credit companies, and served as president of the Warsaw Stock Exchange from 1873 to 1885.

Bloch as Scholar and Social Activist↑

Alongside his business undertakings, Bloch invested in research and social activities. His first publications concerned the economic and social aspects of railway development in Russia. His publications were well-received by specialists of the day. Bloch was even invited to the Scientific Committee at the Russian Ministry of Finance and later appointed a member.

But railroads were not his only academic interests. In the 1880s he publicized comprehensive works on Russia’s finances, industry and agriculture in the Polish Kingdom, well grounded in statistical data and historical material. He also prepared a petition detailing the adverse consequences on the Russian economy that would come with limiting Jewish rights. Consequently, he contributed to stopping the decision that would have introduced discriminatory regulations on Polish land, regulations that had been in force in Russia since May 1882.

Cause, Course and Consequences of the War as a Subject of Scientific Research↑

Bloch’s interest in war stemmed from a number of factors, including observations he made during the Russo-Turkish War (1877-1878), his contact with the Ministry of War during railway construction, and his participation in the special committee preparing Warsaw for siege. In the 1880s he began research on the economic, technical, political and social aspects of war. He wanted to learn about the mechanisms which lead to war, the means of combat in armed conflicts and how to assess the consequences. For that purpose he read the entire available militaristic literature and cooperated with military theoreticians as well as experienced military men, including the staff officers of several European armies. At his own expense he experimented with various kinds of firearms on military training grounds and compiled statistical data regarding the costs of warfare. He then published The Future of War in Its Technical, Economic, and Political Relations as a serial in the periodical Biblioteka Warszawska in 1893 and 1894. He later published the extended version as a book in Polish, Russian, French, German and Dutch.

The Vision of a Great Conflict: Danger to Humankind↑

In volume one, Bloch presented various types of arms and fortifications as well as the tasks of cavalry, artillery and infantry in detail. In volume two, he discussed ground warfare, and in volume three, battle at sea. Volume four addressed the economic side of war. The political circumstances of a future conflict and its influence on civilians and soldiers together with the history of pacifism were described in volume five. In General Conclusions, published separately, he expressed a demand to control armament and form an international court to resolve international disputes.

The book was an effort to scientifically prove that modern war would not bring economic or political advantage to the opponents and that war was a pointless and ineffective means of conflict resolution. Bloch tried to convince his contemporaries, mainly European politicians and the public, that in the face of the prevalent armament race the aggressor would not be able to play the trump card of surprise and that breaking the opponent’s resistance would require lengthy and expensive warfare. Long total war – according to Bloch – would lead to the financial liquidity downfall of countries engaged in the conflict, would cause huge numbers of casualties and famine in the armies and among civilians, and would thus contribute to social outbursts. He acknowledged that artillery and bombers were decisive in determining the war’s outcome and underlined their destructive power. He anticipated the destruction of roads and other means of transportation and the ruin of cities, historical places, museums and art galleries. He predicted the extermination of mankind and the end of European civilisation. He took note of the position of the United States, which as a result of the European conflict would take over European markets, leading to an insurmountable economic gap between America and Europe. The author believed in the rationale behind individuals’ decisions and actions and therefore concluded that it could not come to an outbreak of war that would endanger mankind.

Military circles received Bloch’s work with reserve, but intellectual elites were very interested. Such reception contributed to the calling of the peace conference in the Hague in the summer of 1899, which Bloch attended as an observer and active pacifist. Together with Baroness Bertha von Suttner (1843-1914) and Frederic Passy (1822-1912), he lobbied for creating an arbitration court and reaching an agreement on disarmament. In 1901, his book Future War was nominated for the Nobel Peace Prize. Bloch devoted the last years of his life to fostering pacifism and setting up the Museum of War and Peace in Lucerne. Thirteen sections – created and organised by Bloch – presented the weapons of modern armies, the organisation and course of a total war and its predictable consequences. The museum was officially opened six months after its founder’s death. It was liquidated after World War I.

The memory of Jan Bloch survived mainly in West European intellectual circles. In the beginning of the 20th century, Poles did not receive Bloch’s pacifistic views positively. They saw war as a chance to regain independence. Bloch was also disliked for his Jewish origins and his loyalism towards czarist authorities. Polish historiography in the first half of the 20th century concentrated on documenting the national and class struggle and left little place for the person of Jan Bloch. Foreign historians, particularly military historians, were far more interested in him. A breakthrough occurred in the 1970s when researchers in the field of economic and social history took interest in Bloch as an entrepreneur.[1] However, they were more interested in his economic activity (railway development) and his position in society (member of the great bourgeoisie) than in his role as a pacifist.