Vast land area, sparse population density, inconsistent tsarist policy, and underdeveloped industry prevented Russian railroads from growth before and during the First World War. In 1913 the general staff elaborated a plan to improve the railway system, but outside circumstances doomed this expansion to failure. Even though the railroads’ capacity grew in absolute terms, their efficiency conversely diminished during the war and revolution.

Conditions of the Russian Railroads before the First World War↑

Even though the total length of railway tracks stood at 71,000 kilometres on the eve of the First World War, the Russian railway system had limited capacity to serve the belligerent interests of the state. While Germany and Austria-Hungary had thirty-two railway connections at their disposal, including fourteen two-lane tracks to the Russian borders, Russia relied on merely thirteen tracks to the enemy borderlands, amongst which only eight could be used simultaneously in two directions. It took Russia at least twice as much time - a month or more - as the Central Powers to concentrate the troops at the theatres of war and mobilise, due to unsatisfactory rail infrastructure.

The rail network behind the front line was also sparse. From the Volga, the economic centrepiece of Russian waterways and a major pathway for goods traffic, no more than ten rail tracks led westward. Eastern Russia, including the Urals and their mining and metallurgy, was connected with the central waterway by only four tracks, and the north was tied to the artery by merely one narrow-gauge track from Vologda to the port of Arkhangel’sk. The rail network was thus most dense in the European part of Russia, in particular in its western provinces.

These deficiencies in shipment pertained not only to industrial products important to combat troops on the front line, but, even worse, to the supply goods sector serving civilians in the hinterland. On the other hand, as the figures for the mining sector indicated, until 1916 the total of all shipments increased by approximately 10 percent per year, thus proving the public grievance against the transport disorganisation partly wrong. The prewar traffic peak in 1913 grew considerably in wartime almost without expanding the rail network. The absolute numbers of carriage thus tended to increase.

In wartime the total number of passengers was constantly rising. In 1913 the railroads carried about 235 million passengers; in the first year of the war this figure jumped to 265 million, in 1915 it went up to 294 million, and in 1916 almost 348 million passengers rode the railways. Freight traffic increased as well, but fell slightly at the outbreak of war. As in 1913 the railroads dispatched more than 13.820 billion pood goods of all kinds, while the first year of the war saw a slight lowering of circulation to almost 13.740 billion pood. The year 1915 then saw a considerable growth in the carriage of goods, amounting to more than 14.610 billion pood, finally peaking one year later at nearly 17.230 billion pood. These increases happened in spite of the indisputable problems in transportation and delivery; the Russian railway system actually operated much more intensely during the war, carrying more freight and passengers per route.

At the beginning of the military actions, the western railroads whose tracks amounted to a length of approximately 23,500 kilometres (30 percent of the total) came under the control of the Department of Military Communications subjected to the general staff. It had about 166,000 wagons (33 percent) and 7,000 locomotives (35 percent) at its disposal. This department planned mobilisation (in the second half of 1914 and in the first half of 1915 alone, more than 7 million men were drafted), coordinated the concentration of the troops, and organised all war-related railway operations. During the first phase of the war, the railways’ carrying capacity was enhanced to meet the requirements of increasing wagon loads just as a few new lines were opened, additional tracks constructed, and junctions improved. After combat actions had developed into positional warfare in mid-1915, the department was mainly occupied with supplying the front line with arms and food, and the improvement of communications between the fighting troops and the hinterland. A resolution in 1916 confirmed that decisions on construction and economic use of the railway tracks later on remained under military control, whereas their technical maintenance now came under the jurisdiction of the civil Ministry of Communications.

Gradually accounting for about 40 percent of the total rolling stock, the war and the military use of the railroads had a decisive impact on Russian railway traffic in general. From an economic point of view, this heavy use of the rails for war turned out catastrophic: in the second half of 1914, non-military shipments decreased on average by 16 percent compared to the previous years; timber shipments decreased by 44 percent, raw oil by 22 percent, and cattle by 21 percent. But the heavy burden placed on the railroads could particularly be felt in the number of civilian passengers as indicated by the above numbers.

The difficulty, however, was that throughout almost the entire war there was no overall authority to mediate the conflicting priorities of military and civilian use of the railways. Neither the Special Council on Transport (Osoboe soveshchanie po perevozkam), which was responsible for the shipment of grain, fuel, and military material, nor the Temporary Regulatory Committee on Transport in Wartime (Vremennyi rasporiaditel’nyi komitet po perevozkam voennogo vremeni), established in November 1915, could solve the dilemma. The problem of conflicting priorities manifested itself most alarmingly in the displacement of large parts of the population near the theatres of war. For example, in August 1915, the southern tracks additionally had to convey about 250,000 Ottoman Armenians who had been urged to flee across the Russian border. Naturally, population movements on that scale put a heavy strain on the already overstretched Russian railway system.

To cope with these challenges, in 1915 about 115,000 wagons, i.e. 20 percent of the total rolling stock, were assigned to the evacuation of war refugees in just two months. But despite the greatest efforts undertaken by the officials to improve the Russian railroad system, it remained deficient in the end. The number of locomotives, for example, decreased constantly: by the end of 1914 the total number of engines amounted to nearly 20,000 units, whereas three years later it stood at 9,200. This general downward trend was decried by the Association of Industry and Trade already in spring of 1915; their representatives complained that the shortage of wagons caused considerable delays in the deliveries of fuel to iron and steel producers, threatening some with closure.

Furthermore, because home industry could not meet the requirement of expanding the rolling stock, the government dispersed their orders to British, Danish, Swedish, and American suppliers. Only approximately only one-third of the ordered wagons and locomotives actually reached their destination in Russia. Accordingly, facing these ever-present shortcomings of the Russian railroad system, a general transport plan could never materialise, not least because from 1914 to 1917 the government only spent less than 5 percent (approximately 2.1 million rubles) of the annual military budget for the construction of new lines, the extension of lines, and improving the rolling stock.

As was frankly acknowledged by the Ministry of Transport and Communication itself, the reason for the miserable conditions of the Russian railroad system was not, as the public thought, its alleged disorganisation; the continuous growth of shipments during wartime proved the opposite. Rather, its shortcomings were mostly due to its constant lack of equipment and particularly its shortage of track capacity.

Although the military theatre was important to the majority of Russians, it remained abstract because they read of the disastrous course of the war only in the newspapers. The shortage of supplies, which could be felt anywhere in the empire, had a much more direct effect on the population. The somewhat artificial division of the railway organisation between the front and the rear had obviously exacerbated the transportation difficulties. It was not until January 1917 that the Ministry of Transport and Communication finally brought the railways under its centralised control, but at that time both the front and civilians were suffering. The front suffered a considerable lack of supplies, and the civilians in the towns were already waiting in long queues for basic goods. The soldiers blamed the government in the rear, whereas the civilians felt themselves excluded from the special trains feeding the military on the western front. The unrest that finally spread among civilians at the beginning of 1917 was largely due to the ever-growing supply bottleneck caused by the deficient infrastructure system. At the same time, it was also the railways, particularly the railway workers, that spread the news of the coup d’état in the capital. Thus, the railways became an agent of revolution in a double sense.

Even though the chaotic conditions of the railways had a considerable share in the outbreak of the revolution of February 1917, their efficiency continued to decline due to catastrophic transport facilities and caused great difficulties in providing soldiers and civilians with sufficient basic supplies. Moreover, in 1917 the transport situation was aggravated by a fuel crisis; oil production fell continually and thus the fuel supply dwindled significantly. The railroads consumed nearly half the total fuel in 1916; due to the alarming developments in 1917, more than 400,000 tons of oil were extracted in January, reaching a low of 288,000 tons in September. This could not have had anything but a devastating effect on the transport system in general.

These circumstances most likely contributed to the continuous shift to the political left in the period between February and October 1917. A strike in September additionally paralysed almost the whole rail network for three days. Similar to the revolutionary events in 1905, in 1917 the railway workers were the hub of social unrest. They played a decisive role in crushing General Lavr Georgievich Kornilov’s (1870–1918) coup directed against Aleksandr Fedorovich Kerenskii’s (1881–1970) Provisional Government in September 1917 and were involved in formulating the political demands of the new forces. The Bolsheviks hurried to attribute much importance to the transport system immediately after their seizure of power, emphasising once more the enormous political, economic, and social impact of the railways on the course of wartime and revolutionary policy. 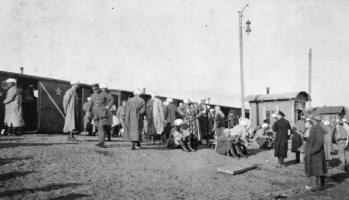 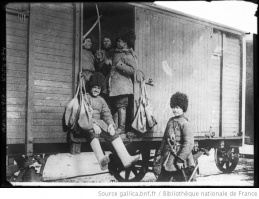 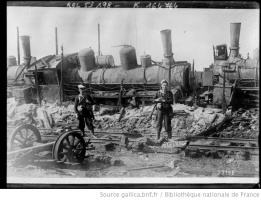 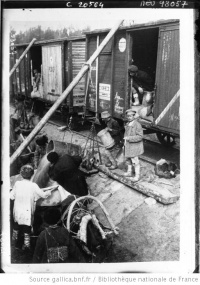 Attempts to alleviate the horrors of starvation 1921