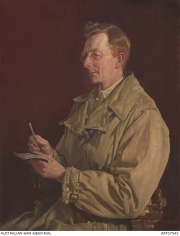 Charles Bean was Australia’s official war correspondent who later wrote and edited the twelve-volume Official History of Australia in the War of 1914-1918 and founded the Australian War Memorial. No other Australian has been more influential than Bean in shaping the way the First World War is remembered and commemorated in Australia.

Born in Bathurst, Charles Bean (1879-1968) spent most of his formative years in Britain where he attended Clifton and read classics at Oxford. He returned to Australia in 1904, was admitted to the New South Wales Bar and spent the following years travelling throughout the state. This led him to write an essay on Australia seen through the eyes of someone returning after a long absence. Printed in the Sydney Morning Herald, the essay foreshadowed themes that would later emerge in his war writing, such as the idea that Australians represented the best of the British race and the finest of them lived in the bush.

Bean became a journalist and joined the staff of the Herald in 1908. He was a special correspondent on board HMS Powerful, the flagship of the Royal Navy squadron on the Australian station, and wrote articles on the wool industry from rural New South Wales. This furthered his interest in rural Australia and the virtues of its society. He saw the bush as the dominant influence in the creation of what he saw as "outstanding national types" and a unique form of overseas Briton.[1]

Life as a War Correspondent↑

By mid-1914, Bean was writing a daily commentary on the crisis in Europe, and in September, he won a ballot by the Australian Journalist Association to become Australia’s official war correspondent. A civilian with the honorary rank of captain, Bean sailed with the first Australian Imperial Force (AIF) contingent and landed on Gallipoli on 25 April 1915. On 8 May, Australians read glowing eyewitness accounts of the landing written not by Bean, but by the British correspondent, Ellis Ashmead-Bartlett (1881-1931), who showed surprise that colonial troops had done so well in their first time in battle. Bean’s later report was more precise in detail (Ashmead-Bartlett had observed the landing from a battleship anchored offshore), and as the campaign continued, he saw Australians displaying qualities he had observed on assignment in the bush.

Having earlier annoyed the troops by reporting on ill-discipline in Egypt, Bean won their admiration on Gallipoli where he was recommended for a Military Cross for rescuing wounded at Krithira. As a civilian, he was not eligible for the award, but was Mentioned in Despatches instead. He was shot in the leg observing the fighting during the August Offensive but remained on the peninsula until the evacuation in December. The bullet remained lodged within millimetres of his femoral artery for the rest of his life. On Gallipoli, Bean filled the first of 226 notebooks he would later draw on in writing the official history.

Bean sailed for France in March 1916 where he reported on the Australians and their campaign on the Western Front. He noticed Australian troops were avid collectors of battlefield souvenirs and imagined a museum where they would be displayed. Witnessing the carnage on the Somme, Bean began to conceive the idea of a memorial where Australia could commemorate its war dead and view the relics its troops collected. He also urged commanders for the systematic collection of war records which culminated in the formation of the Australian War Records Section in May 1917. Controversially, Bean was involved along with his fellow journalist Keith Murdoch (1885-1952) in attempting to prevent the promotion of General John Monash (1865-1931) in favour of his ally Sir Cyril Brudenell White (1876-1940).

After the armistice, Bean returned to Gallipoli to lead the Australian Historical Mission in collecting relics for the Memorial he envisaged, obtain Ottoman accounts of the fighting and report on the condition of Australian war graves. He returned to Australia in May 1919, whereupon he recommended the writing of an official history and the establishment of a national war memorial that “for all time … [would] hold the sacred memories of the A.I.F.”.[2] The Australian government accepted his proposals; later that year, Bean moved to the outskirts of Canberra to begin work on the official history.

Bean wrote six of the twelve volumes himself, devoting twenty years of his life to two volumes on Gallipoli and four on the AIF in France and Belgium. He also edited a further six in a series that contained nearly 4 million words. Writing in plain prose and in dense detail, Bean’s was a democratic history of ordinary men in battle which gave him the latitude to comment on the Australian character. He concluded his second Gallipoli volume with the assertion that "it was on the 25th April, 1915, that the consciousness of Australian nationhood was born."[3]

On 11 November 1941, just before the final volume of the official history was published, Bean witnessed the opening of the Australian War Memorial in Canberra. A shy and modest man, known to his contemporaries as “Captain Carrot”, Bean declined knighthoods but accepted a Chesney Gold Medal from the Royal United Service Institute and honorary degrees from the University of Melbourne and the Australian National University. The approach he took to writing the official history heavily influenced Gavin Long (1901-1968), who was appointed general editor of the Second World War official history series in 1943.

Bean was admitted to Concord Repatriation Hospital in Sydney in 1964 and remained there until he died in August 1968. His greatest monument is his Official History of Australia in the War of 1914-1918, and today, millions of people from all over the world visit the Australian War Memorial to view its galleries and access its rich archival holdings. The centrepiece is a dedicated commemorative area where the names of 102,000 Australian servicemen and women who died during war and other operations from the Boer War to Afghanistan are commemorated in bronze. Bean’s vision appears on the wall inside the front doors: "Here is their spirit, the heart of the land they loved; and here we guard the record which they themselves made."[4]

Historians generally agree that Bean’s belief in rural virtues does not adequately explain how the AIF transformed from an organisation of neophytes in 1914 to the effective fighting force that contributed to Germany’s defeat in 1918. Bean was a product of empire and late Victorian values, yet his influence on the study of Australian military history remains enormous.[5] 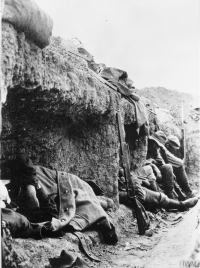 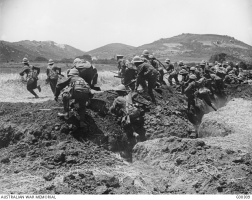 Charge of the Royal Naval division at the Dardanelles 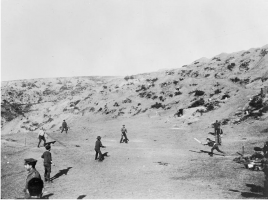 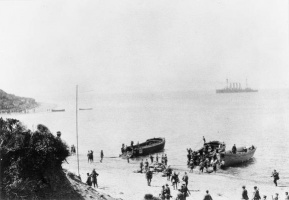 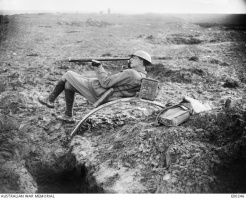 Charles Bean with a telescope