The Anzac Memorial in Hyde Park, Sydney, is the state war memorial of New South Wales. Fundraising for a memorial began during the war, but the memorial was not built until the early 1930s, opening in 1934. It was designed by the architect C. Bruce Dellit and created collaboratively with the sculptor Rayner Hoff.

The Anzac Memorial in Hyde Park, Sydney, was inaugurated in 1934 after a fundraising and building effort stretching back to 1916. It was intended as a tribute from the people of New South Wales to the valour and sacrifice of the Australian Imperial Force (AIF). Its design was a collaboration between the architect C. Bruce Dellit (1898-1942) and the sculptor Rayner Hoff (1894-1937), who decided against directly recreating classical funerary or commemorative forms. Instead, they designed and created the monument and its adornments in Art Deco style.

In 1916, the first anniversary of the Anzac forces’ landing on Gallipoli, entrepreneur and newspaper proprietor Hugh D. McIntosh (1876-1942) launched an appeal for an Anzac Memorial and Hall of Fame. Further fundraising appeals held in 1918 and 1919 raised a memorial fund of over £60,000. Efforts to build the memorial, however, were hampered by funding and legal constraints, and also by disagreements over what such a memorial ought to be. The largest returned servicemen’s organisation, the RSSILA, favoured a utilitarian memorial building housing social space and offices; others in the community desired an explicitly commemorative form. Dr Mary Booth (1869-1956), a physician involved in patriotic causes during the war, and founder of the Anzac Fellowship of Women in 1921, actively lobbied against using the memorial funds for any cause other than remembering the dead:

Are we so mean a people that now we want to take the money subscribed to the sacred memory of our dead to use and save ourselves and the Government the expense of providing the relief which it is clearly our duty to give?[1]

The Anzac Memorial (Building) Act of 1923 did not resolve the argument over what form the memorial should take, but it did incorporate the board of trustees who were to manage the memorial funds and to oversee building it, including the lord mayor, state premier and opposition leader, and leaders of three major veterans’ organisations. The trustees discussed at least ten possible locations for the memorial. Eventually, in 1928, they settled on Hyde Park, and agreed to a commemorative design. By the time the winners of the design competition had been announced in 1930, Sydney had already acquired numerous municipal and suburban memorials, and a cenotaph in Martin Place (used as the focal point for Anzac Day ceremonies from 1927 onwards).

The Art and Architecture of the Memorial↑

In July 1930, Sydney architect C. Bruce Dellit was pronounced the winner of the design competition for the memorial. His design was intended to be contemporary in style, adapting Art Deco motifs used in commercial buildings to commemorative purposes. The apex of the building recalled the shape of a ziggurat, and window panels were decorated with skyscraper forms at the base and etched with rising sun patterns. His design also called for a number of groups of symbolic statues both decorating the outside and standing within the building. Soon after winning the competition, Dellit commissioned Rayner Hoff to create the sculptures; Hoff in turn persuaded Dellit to replace allegorical figures with concrete representations of types of Australian servicemen and women. The resulting memorial is thus the product of collaborative design. Created in granite, these figures of different AIF “types” decorate the outside of the memorial. After viewing the outside, visitors can walk inside and upstairs into a central hall of memory, from which they look down through a circular aperture into a well of contemplation (automatically causing viewers to bow their heads, creating an air of reverence), or up into a dome decorated with 120,000 stars representing servicemen and women from New South Wales who served in the war. On the floor at the western entrance, the words “Let Silent Contemplation be Your Offering” are inscribed. In the centre of the sunken well of contemplation structure (designed by Dellit) is Hoff’s sculpture, Sacrifice. Echoing Spartan imagery, this bronze sculpture depicts a dead, prone warrior, head resting on his sword and arms thrown back along it, carried on his shield by the significant women in his life.

The finished designs for this sculpture and for the granite external sculptures were exhibited in Sydney in 1932 to acclaim. Models for two other sculpture groupings – intended to be large bronze sculptures placed by the east and west windows of the memorial – were exhibited along with them, but generated controversy. These were Crucifixion of Civilization 1914 and Victory After Sacrifice 1918. The first depicted a naked woman (the figure of peace) crucified on the sword and shield of Mars above a pyramid of dead soldiers with recognisable First World War uniforms and weapons: the exhibition catalogue described them as the “human and material wreckage of war”.[2] The second depicted a naked woman with her arms upraised (representing Australia), also atop a pyramid of dead soldiers. Both of these works represented war as a masculine assault on feminine peace and civilisation. These groups, and especially Crucifixion of Civilization, aroused significant hostility, and Protestant and Catholic clergy declared them blasphemous. It was decided that there were insufficient funds to have these cast at full size, and they were therefore never installed in the memorial. If they had been, the symbolic tone of the memorial as a whole might well have been more explicitly anti-war.

On 24 November 1934, an estimated 100,000 people gathered in Hyde Park for the official opening of the Anzac Memorial. It has served both as a memorial and as a focal point for memorial events ever since, and for many years it housed offices of veterans’ organisations in its base. In 1984, the memorial’s fiftieth anniversary, it was rededicated to honour all Australians who served their country in war, and the former Returned and Services League offices were turned into exhibition space. In 2014, a major centenary project was announced, involving new landscaping and underground education and interpretation spaces. 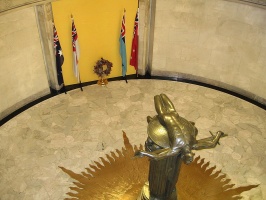 The sculpture "Sacrifice" inside the ANZAC War Memorial, Sydney 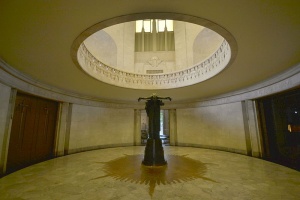 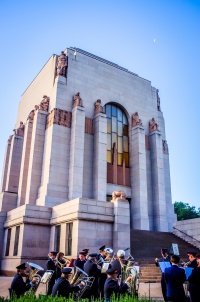 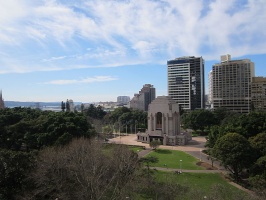 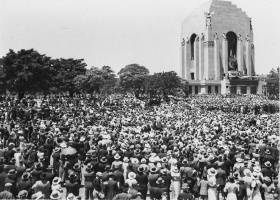 Opening of the Anzac War Memorial, Sydney, by the Duke of Gloucester