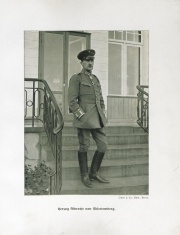 Albrecht Duke of Württemberg was the commander-in-chief of the German 4th Army from 1914-1917 and the "Heeresgruppe Herzog Albrecht" ("Army Group Duke Albrecht") from 1917-1918. The 4th Army fought under Duke Albrecht’s command in the victorious Battle of Neufchâteau on 22 and 23 August 1914 and in the first two battles of Ypres.

Albrecht Duke of Württemberg (1865-1939) grew up in Vienna and Gmunden/Upper Austria.[1] In 1884, he joined the Württemberg army. As a young officer, Duke Albrecht gained experience in both cavalry and infantry forces. He served in units of the XIII (Royal-Württemberg) Army Corps as well as in units of the Prussian army. Thus, in the period before 1914, Duke Albrecht acquired extensive military competencies. As a member of a reigning royal house he did not complete a general staff training. In 1913, Duke Albrecht obtained the rank of a Generaloberst and the function of a Generalinspektor of the 6th Army.

At the beginning of the First World War, Duke Albrecht was appointed commander-in-chief of the 4th Army. During the first weeks of the war, when the German troops advanced in Belgium and northeastern France, his army achieved a victory in the Battle of Neufchâteau (Ardennes) on 22 and 23 August 1914. In October 1914, Duke Albrecht was appointed commander-in-chief of a newly formed 4th Army which consisted of five reserve corps. These deficiently trained formations were deployed in Flanders and suffered devastating losses in the First Battle of Ypres (20 October to 18 November 1914). The encirclement of the British, French and Belgian troops or a breakthrough of the Entente's front line could not be achieved. In the Second Battle of Ypres (22 April to 25 May 1915), the German 4th Army led by Duke Albrecht gained some limited ground, but again failed in an attempt to force a breakthrough of the front line held by the Entente powers. During this confrontation poison gas (chlorine gas) was used widely for the first time on the Western Front. Duke Albrecht was awarded the Order Pour le Mérite on 22 August 1915 (oak-leaf garland on 25 February 1918). On 1 August 1916, he was promoted to General Field Marshal. When the German army on the Western Front was reorganized and divided into three army groups (Heeresgruppen) in March 1917, Duke Albrecht was given the supreme command over the troops stationed in Alsace and Lorraine. The “Heeresgruppe Herzog Albrecht” was not involved in major battles until the end of the war.[2] The role played by Duke Albrecht as the supreme military commander in Alsace-Lorraine, as well as his manner towards the local population have not yet been researched.

Duke Albrecht descended from the Catholic line of the Württemberg royal house, founded by his father Philipp, Duke of Württemberg (1838-1917). After it became obvious in the 1890s that Wilhelm II, King of Württemberg (1848-1921) would remain without male heirs, the convinced Catholic Duke Albrecht was the heir presumptive in Württemberg, whose population was mainly Protestant. He assumed representative functions and was introduced to governmental work. Duke Albrecht did not renounce the throne in 1918 as Wilhelm II did. He moved to Altshausen in Upper Swabia. In 1921, he became the head of the royal family. After Adolf Hitler’s (1889-1945) rise to power Duke Albrecht hoped for a short period of time that his military reputation, and perhaps even the monarchy, would be restored. But as soon as he saw that his political hopes were unrealistic and witnessed his sons suffering from the reprisals of the new rulers, he distanced himself from the regime. From then on, the National Socialists ignored Duke Albrecht.