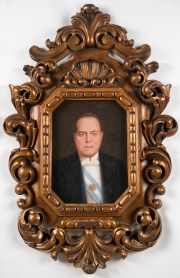 Hipólito Yrigoyen was president of Argentina during a critical moment of the First World War. He maintained neutrality despite internal and external pressures, and promoted Pan-Hispanism to counteract United States Pan-Americanism.

Hipólito Yrigoyen (1852-1933) was the leader of the Unión Cívica Radical (Radical Civic Union), the main opposition party in Argentina from the time of its establishment in 1890. After the democratization of the political system in 1912, Yrigoyen was elected president of Argentina twice (1916–1922, 1928–1930). He was also the first Argentine president to be overthrown by a coup d’état.

1 During World War I↑

Hipólito Yrigoyen maintained the neutrality adopted by his predecessor, the conservative Victorino de la Plaza (1840–1919), but in 1917 the international scene created a challenge for his government. After its entry into the war, the United States started a campaign to persuade Latin America to declare war on Germany. At the same time, three Argentine merchant ships were sunk by German submarines, which aroused strong internal pressures to break diplomatic relations with that country. Yrigoyen’s persistence in neutrality led the United States to disclose confidential telegrams from the German minister in Argentina, Graf Karl von Luxburg (1872–1956). These communications, addressed to his government, recommended sinking Argentine ships without a trace. Despite this revelation and Argentine public outcry, Yrigoyen maintained neutrality.

Yrigoyen also fostered Latin America’s adoption of a common strategy in facing the war based on Pan-Hispanism, the affirmation of a cultural identity rooted in Spanish heritage, as an alternative to the United States ideology of Pan-Americanism. In this vein, he established the celebration of 12 October as Día de la Raza (Day of the Race) in homage to Spain.