The Treaty of Trianon is one of the Paris peace treaties that ended the First World War. It was concluded between Hungary and the Allied and Associated Powers on 4 June 1920 in the Grand Trianon Palace situated in the Versailles Palace park. It sanctioned the dismemberment of the Hungarian state.

The Dissolution of Historic Hungary↑

In the fall of 1918, the multi-ethnic Austro-Hungarian monarchy quickly collapsed. In Vienna and Budapest, democratic revolutions ousted the war governments, while on the peripheries new states began to form with the consent of the victorious Great Powers. Spokesmen of national self-determination organized mass demonstrations which issued declarations concerning Croatia’s secession. The Hungarian democratic government started negotiations with minority leaders, and prepared plans and laws to introduce national autonomies, but these measures could not slow the process of disintegration.

The Padova Armistice ended the war for Austria-Hungary on 3 November 1918. The subsequent Belgrade Military Convention on 13 November 1918 set the demarcation lines between the Hungarian, Serbian and Rumanian armies, putting huge territories in the south and east under foreign control pending the peace settlement and forcing the new Hungarian state to disarm. On 23 December 1918, the Paris Peace Conference ordered the evacuation of northern Hungary, where the new Czecho-Slovak administration was to be established.

Serbian, Romanian and Czecho-Slovak troops led by Entente officers continued their advance in November 1918 and January 1919 and occupied further territories well beyond these demarcation lines. Paralyzed by the armistice conventions and expecting frontiers to be a subject of mutual negotiations at the Peace Conference, the Hungarian government passively watched these manoeuvres. When the Conference ordered the evacuation of the eastern strip of the Great Plain, populated mainly by Hungarians, on 19 March 1919 (Vix Ultimatum), the government resigned and a coalition of Social Democrats and Bolsheviks took over. In response to further advances by the Romanian army in April 1919, the Hungarian Republic of Councils (Magyarországi Tanácsköztársaság) organized its Red Army to halt the advance, and started a successful but short-lived north-eastern counteroffensive to connect to the Russian Red Army. However, two ultimatums, on 7 and 13 June 1919, from Georges Clemenceau (1841-1929), president of the Peace Conference, and a decisive Romanian invasion led to the fall of the Bolshevik government. Romanian troops marched into Budapest on 3 August 1919 and occupied the central and north-western territories of Hungary as well.

These manoeuvres served as a military backing for the territorial demands that Hungary’s neighbours presented at the Peace Conference in January and February 1920. The Serb-Croat-Slovene Kingdom, Czechoslovakia and Romania claimed not only the lands populated by their kinsmen, but other territories of historic Hungary, too. These areas contained important mines, industrial facilities and railroad lines, and were home to more than 4 million ethnic Hungarians. While France supported most of these claims, the British and American proposals favoured setting the frontiers more closely along the ethnic boundaries. A compromise between the Great Powers’ proposals and the successor states’ claims was first reached by Peace Conference experts in mid-March 1919 and then by the Supreme Council in mid-May 1919. During the summer the Peace Conference accepted an Austrian proposal to attach Western Hungary, later known as the Burgenland, to Austria.

The Hungarian Delegation at the Paris Peace Conference↑

On 1 December 1919, the new Hungarian government, composed of a wide coalition of parties ranging from Christian Nationals to Social Democrats, was finally invited to Paris. The conditions of peace – which were prepared without any representation of Hungarian interests – were handed over to the Hungarian Delegation on 15 January 1920. Its president, Count Albert Apponyi (1846-1933), was allowed to address the Supreme Council on 16 January 1920. Apponyi criticized the idea of dissolving historic Hungary and proposed plebiscites to decide on the possession of the debated territories. The Conference ultimately rejected both his proposals and the thirty-eight major memorandums presented by the Hungarian Delegation. British and Italian prime ministers, David Lloyd George (1863-1945) and Francesco Saverio Nitti (1868-1953), respectively, were keen to reopen the negotiations over the frontiers, reparations and other issues so that the Hungarian proposals would at least be discussed, but the French and British foreign ministries wanted to see the case closed without further delay.

Despite repeated efforts of the Hungarian Delegation and secret negotiations between Hungarian and French government officials between March and October 1920, the peace conditions remained basically unaltered in the final text of the peace treaty (dated 6 May 1920) that was handed over to the Hungarians.

Hungary Signs the Treaty of Trianon↑

On 10 and 12 May 1920, the Hungarian Delegation discussed the possibility of rejecting the treaty, but the meeting agreed that such resistance would be dangerous and ultimately futile. Finally, on 31 May 1920 the Hungarian government sent two delegates, Ágost Benárd (1880-1968) and Alfréd Drasche-Lázár (1875-1949), to France to sign the treaty. The signing ceremony took place at the Grand Trianon Palace on 4 June 1920.

The structure, and at most places even the text of the Treaty of Trianon is similar to those of the German, Austrian, Bulgarian and Turkish peace treaties. The treaty was composed of fourteen parts. Part I contained the Covenant of the League of Nations. Part II described with cartographic precision Hungary’s new borders.

Table 1: Distribution of Territory and Population after the Treaty of Trianon[1]

Table 2: Percent Distribution of the Population of Hungary by Mother Tongue[2]

Part III regulated political questions such as state succession, citizenship and protection of minorities. Part V detailed the limitations of the Hungarian army – 35,000 troops including officers – and weaponry. Parts VIII and IX dealt with reparations and related fiscal questions.

A covering letter (lettre d’envoi), signed by Alexandre Millerand (1859-1943), then president of the Peace Conference, was also attached to the final peace conditions to explain why no substantial changes had been made in the text of the treaty. The peacemakers dismissed the idea of plebiscites as well. One passage of the document, however, offered some vague hope of possible frontier rectifications to be proposed by the Delimitations Commissions, a board of experts appointed by the five victorious powers and by the interested countries themselves to trace the actual frontier lines. The "Millerand letter" was considered by the Hungarian government to be an integral part of the Treaty of Trianon and was incorporated in the text of the law that ratified the treaty on 15 November 1920.

The peacemakers, however, did not envisage such rectification of the frontiers. With the sole exception of a local plebiscite (14 to 16 December 1921) and the subsequent reattachment of the town of Sopron and eight nearby villages, covering a territory of 100 square miles, and some minor rectifications of a technical character, Hungary’s borders remained unchanged until the eve of the Second World War.

Socioeconomic Effects of the Treaty↑

The territorial changes demanded immediate reaction from the Hungarian government. With the loss of the peripheral mountainous regions providing lumber, coal and other raw materials, and with a huge agricultural overproduction, Hungary was forced to reorganize her economy in general and to increase foreign trade and improve home industry in particular.

Table 3: Percent Distribution of the Population of Hungary by Religion[3]

Table 4: Percent Distribution of the Population of Hungary by Profession[4]

Between 1918 and 1924 over 400,000 Hungarian refugees fled the neighbouring states to settle within the new frontiers of Hungary. Taking care of them heavily burdened the already unbalanced Hungarian budget. About 3 million other Hungarians who remained in their homeland, and thus became foreign citizens after the frontier changes, became minorities in the successor states. Financial as well as political support was granted them by the Hungarian government throughout the interwar period.

In Hungary, an atmosphere of sorrow, anger and hatred accompanied the signing of the treaty. Interwar governments of Hungary all worked for the revision of the treaty conditions, especially its frontier clauses. Revisionism became a catchword that resounded in everyday life, from public speeches to newspaper articles and school classes. The detached provinces were generally referred to as "occupied territories."

A long-term effect of the Treaty of Trianon was Hungary’s increasing readiness to align her foreign policy with other countries who wanted to disrupt the Versailles system. This mutual aim brought Hungary close to the Axis Powers in the late 1930s, which resulted in regaining half of her lost territories between 1938 and 1941, and Hungary’s entering the Second World War in 1941. 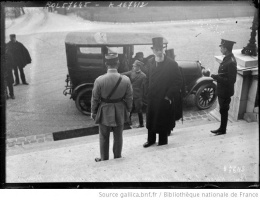 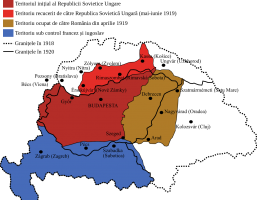