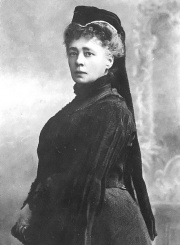 Bertha von Suttner (1843-1914) was awarded the Nobel Peace Prize in 1905. She wrote an internationally acclaimed antiwar novel Die Waffen nieder! (Lay Down Your Arms!) and co-founded the Austrian Peace Society (1891) and the journal, Die Waffen nieder! (1892-1899). She was among the most inspirational pacifists prior to the First World War.

Count Franz Joseph Kinsky (1769-1843), Bertha Kinsky’s father and a retired high-ranking officer of the Habsburg Imperial Army, died shortly before Bertha’s birth. Her mother, Sophie Wilhelmine von Körner (1815-1884), who never remarried and gradually sapped the family’s inheritance, raised her and her older brother in Brno (Moravia). From her governesses, private tutors, and European travels with her mother, Bertha learned – apart from her native German – English and French fluently. She soon pursued a career as a professional singer. In 1873 she obtained a job as governess of the Baron von Suttner family, who had an estate in Lower Austria.

Arthur Gundaccar von Suttner (1850-1902), the youngest family member, and Bertha soon fell in love. When Arthur’s mother found out in 1876, Bertha was encouraged to apply for a job as secretary to the Swedish dynamite inventor Alfred Nobel (1833-1896) in Paris. Within weeks, however, she secretly returned to Vienna, eloped with Arthur (which provided her the title Baroness), and together they planned their escape – or adventure – to the Caucuses, as guests of her friend Princess Ekaterina Dadiani (1816-1882). Significantly, Bertha’s short stay in Paris sparked a friendship with Nobel that lasted until his death, and it was largely due to her persuasive lobbying that Nobel added a fifth – the Peace – prize to his testament and prestigious legacy.

The couple spent nine years in the Romanov colony Mingrelia, situated in today’s Georgia. Bertha, with encouragement from Arthur, began writing for German-language literary papers, using the pseudonym B. Oulot. Not even her editors knew that she was a female author. She also studied influential modern thinkers such as Charles Darwin (1809-1882), Herbert Spencer (1820-1903), and Henry Thomas Buckle (1821-1862). She pored over Immanuel Kant's (1724-1804) works as well. Living close to the Caucasian front of the Russo-Turkish War of 1877-78, Suttner also gained insight into war’s costs, including hunger on the Caucasian home front. By the time the Suttners returned to Austria in 1885, they had become professional authors.

Lay Down Your Arms!↑

In 1889 Bertha von Suttner succeeded in publishing what would become an almost instant international bestseller, the antiwar novel Die Waffen nieder! (Lay Down Your Arms!). It was a tremendous breakthrough, transforming her into a public political figure. Adding to its impact, famed Russian novelist and pacifist Leo Tolstoy (1828-1910) wrote that he wished it would do the same for repudiating war that Harriet Beecher Stowe (1811-1896)’s Uncle Tom’s Cabin had done to abolish slavery in the United States. The polemic plot centers on the formative journey of a well-behaved aristocrat’s daughter into a feisty challenger of the widely accepted view that war was a necessary evil. According to Nobel, Suttner had declared “war on war.”

Based on the overwhelming public enthusiasm for her novel, Suttner energetically launched an Austrian branch of the international peace movement, the Austrian Peace Society (1891), of which she remained president until her death. To attract local attention to the Society, she publicized its aims and meeting times over the course of several weeks in the leading daily Viennese newspaper, Die Neue Freie Presse. All those interested were welcomed. Thereafter she co-edited and published – with a younger colleague, Alfred Hermann Fried (1864-1921) – a monthly peace journal, Die Waffen nieder! Fried devoted his life to peace advocating and took over the journal in 1900, renaming it Die Friedens-Warte. Arthur von Suttner, meanwhile, co-founded an organization that denounced anti-Semitism in Austria (Verein zur Abwehr des Antisemitismus in Österreich). Prior to the Great War both Suttners mutually supported each other and headed associations that advocated overcoming social prejudices and opposed the use of violence as a means to resolve conflicts.

From now on Bertha von Suttner’s days were spent initiating and answering enormous amounts of international correspondence, writing articles condemning warmongering and wars (e.g. Boer, U.S.-Mexico, China-Japan, Balkan Wars), informing the public about arbitration deliberations, attending annual Universal Peace Congresses and meetings of the International Peace Bureau in Bern, of which she was vice-president, lecturing on what she considered was society’s inevitable evolution towards universal peace, and helping to found more branches of the peace movement. She also attended the First and Second International Hague Peace Conferences (1899 and 1907), and made two trips to the United States (1904, 1912), the latter of which was a six-month coast-to-coast lecture tour. In short, Suttner became a leader among the mostly male-dominated pacifist circles. Such was her charismatic personality that for two decades, several contemporary (satirical) caricaturists turned her into the “face” of the European peace movement in their publications. As a result, Suttner was at once publicly ridiculed – often presented as a naïve woman attempting to broker peace between warring nations (e.g., China, Japan, and Korea in 1894; Russia and Japan in 1904) – and yet also awarded a kind of public prominence usually reserved for leading male politicians. In 1905 she was awarded the Nobel Peace Prize, the first woman to receive it.

Suttner remained a peace activist until her death, exactly one week before Austrian heir to the throne Franz Ferdinand, Archduke of Austria-Este (1863-1914) was assassinated (with his wife) in Sarajevo, which led to the “July Crisis.” These July events also provoked the cancellation of Vienna’s first hosting of the Universal Peace Congress, to have been held in Suttner’s honor in September 1914. In 1921, the recently formed Women’s International League for Peace and Freedom (WILPF), as if to make up for it, held their own first post-war congress in Vienna.

Legacy to the International Peace Movements↑

The adult Bertha von Suttner devoted her life to attempting to prevent war, especially by consciousness-raising, and promote a culture of peace. Her iconic call to “lay down your arms” – written and shouted out to governments, civil servants, and to the public-at-large in lectures, journalistic articles and novels – seems just as relevant today. Suttner welcomed a new era of informed, educated and politically active, democratic citizens. She envisioned a time when negotiations between conflicting states would replace battlefields, and disarmament and the end of conscription would supplant militaristic rhetoric and war industries. Indeed, for Austrian novelist Stefan Zweig (1881-1942), Suttner was a modern day Cassandra of Troy or Jeremiah of Jerusalem. Many, Zweig recalled, tired of her message of non-violence, which combined emotion and reason (e.g. a catalogue of wars’ long-term costs). Among those who gradually took it up, however, were female suffragist-pacifists, such as Rosika Schwimmer (1877-1948), who criticized the outbreak of the Great War as a “madness” originating out of the “bankruptcy” of male leadership. The suffering and destruction they then witnessed during the war itself stirred up emotions of revulsion. Many became WILPF leaders. As Suttner wrote months before her death: “In the name of love, the most sacred of all feelings…(w)e have the right, we women, to show our feelings.”[1] Hers was a call to always value life over death and human solidarity over human antipathy. As she wrote to Alfred Nobel (circa 1893): “Progress towards justice is surely not a dream, it is the law of civilisation. The amount of savagery and stupidity in the world is certainly still very great, but the amount of kindness and gentleness and reason is growing every day.“[2]