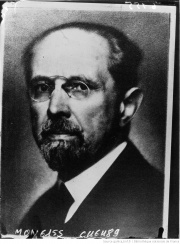 Werner Sombart was a German political economist and pioneering sociologist who became notorious during World War I for his 1915 anti-English screed Händler und Helden (Traders and Heroes).

Born in 1863 in Ermsleben, Falkenstein/Harz to a successful sugar industrialist and National Liberal Reichstag politician, Werner Sombart (1863-1941) began his university studies in Pisa, Italy, where he developed an early interest in socialism. After transferring to the University of Berlin in 1884, he studied political economy under Adolph Wagner (1835-1917) and Gustav Schmoller (1838-1917), completing his doctorate in 1888 with a dissertation on the rural proletariat of the Roman Campagna. Through his dissertation and a deepening interest in the theories of Karl Marx (1818-1883), Sombart gained a reputation as a socialist radical, which initially precluded a professorial track in Germany. He subsequently worked as the legal agent (Syndikus) of the Bremen Chamber of Commerce and in the meantime completed the second dissertation required for a German professorial career. In 1890 he was appointed to a junior professorship at Breslau University, advancing to a regular professorship at the Berlin School of Commerce (Handelshochschule Berlin) in 1906. By that point he had gained a national reputation as a highly original scholar in the burgeoning field of sociology through a number of studies on technology, fashion, luxury, socialism, and social movements, which culminated in his magnum opus on the origins of modern capitalism, Der moderne Kapitalismus (3 vols., 1902-1927). Along with Max Weber (1864-1920), Sombart was a cofounder of the German Society for Sociology and coeditor of the Archiv für Sozialwissenschaft. He was an influential voice in the sociology of religion and as a Wilhelmine cultural critic with his work on the role of the Jews in the development of capitalism, Die Juden und das Wirtschaftsleben (1911). He was also a vociferous supporter of the use of racial theories in sociology. By the eve of the First World War, Sombart was one of the most prolific and popular public intellectuals in Imperial Germany.

Sombart did not sign the notorious “Manifesto of the Ninety-Three” of Germany’s leading scholars and artists defending the German actions in Belgium in September 1914, and unlike many of his economist colleagues, he was not involved in assisting Germany’s transition to a wartime economy. He was, moreover, not involved in the debate over German war aims, which mobilized many of his colleagues at Berlin University, where he was appointed professor in 1917. Instead, most of his energy during the war was devoted to completing the second volume of Der moderne Kapitalismus, published in 1917. He did, however, give sporadic public lectures and publish newspaper and magazine articles early in the war.[1] This culminated in his 1915 book Händler und Helden.

Händler und Helden was no typical pro-war propaganda tract. At 145 pages it was a lengthy distillation of Sombart’s prewar cultural critique outlining the supposedly baleful effects of commercialism on German society. This critique was now redirected against England and the English “trader” spirit, which he presented as the polar opposite and mortal enemy to the so-called German “hero” spirit. Ostensibly written for German soldiers to define what it is they were fighting for, Sombart argued that the war was a “religious struggle” against an evil English merchant culture, which he presented as limited, utilitarian, and devoid of any idealism or high culture. In Sombart’s telling, the English were reduced to a grubby nation of shopkeepers focused on “comfort and sport” who left it to others fight their wars. The English state is presented as a Hobbesian leviathan serving the interests of a trader nation and subjecting the rest of the world to exploitation through the device of commercial contract. Motivated only by profit, England was waging a trade and financial war against Germany using the familiar cowardly tools of boycott, theft, piracy, and blockade, as well as “journalistic encirclement” through its control of worldwide information and opinion.

Drawing heavily on a selective reading of Friedrich Nietzsche (1844-1900), Johann Gottlieb Fichte (1762-1814), Georg Wilhelm Friedrich Hegel (1770-1831), Johann Wolfgang von Goethe (1749-1832), and others, Sombart claimed that through their philosophical idealism it was the Germans alone who held sacred the values of work, duty, and sacrifice for the whole, a people devoted to a life task of transcending oneself through striving and sacrifice. Thus, to be German, Sombart argued, “was to be a hero”, and the virtues of a hero were the warrior virtues that experienced their highest fulfillment in war: “courage to sacrifice, loyalty, innocence, awe, courage, piety, obedience, goodness.”[2] This was manifest not only in Germany’s high cultural achievements but also in the superindividual ideas of Volk and Vaterland. Likewise, the state was not a mere contractual concoction to secure negative liberties, but an endlessly moving, living whole supposedly devoted to the positive moral task of developing mankind and fulfilling collective aspirations. In this German heroic conception of the state, rights existed only inasmuch as individuals had obligations and duties to the whole.

Sombart was positively strident in his defense of German militarism: preparing and waging war with discipline and order was supposedly the highest incarnation of the German heroic spirit and hence something “holy”.[3] Indeed, Sombart described the war as a “miracle” which had delivered German society from the temptations of the English trader spirit of self-obsessed, meaningless living – “commercialism, mammonism, materialism, sportism, comfortism” – which he believed had made disturbing inroads into prewar German life.[4] To Sombart the war had reinvigorated the belief in ideals and hence strengthened the unity of the nation, giving the suffering and death of the young soldiers on the front meaning. Indeed, Sombart claimed that war gave normally meaningless technological progress purpose, just as it became an opportunity to purge Germany of foreign ways and cultivate a new more vigorous race of Germans, “keen, broad-chested, light-eyed...” men and “[w]ide-hipped women to bear tough warriors.”[5]

Sombart’s tract also welcomed Germany’s isolation in war. A more autarkic Germany without international connections in science or culture was no loss, in his estimation, as in those pursuits he believed Germany stood preeminent and entirely self-sufficient. As the various people of the world had anyway become “besondere Arten” (special species) and the Germans were the modern “chosen people”, such mixing was corrosive to the national peculiarity that Sombart believed was the basis of all human values.[6] In the closing passages of his book, Sombart claimed that while the Germans were not out to conquer their neighbors or the lands of “Naturvölker” (primitive people), a larger “Volkskörper” (people’s body) would need “Raum” (space) for development and justified taking as much land as was needed from the vanquished. And for strategic reasons, Sombart argued that Germany might have to establish naval bases in Dover, Malta, and Suez.[7] What was ultimately at stake for Germany, however, was not conquest but the preservation of its heroic culture – above all the soldiers in the field had to remember that “Germany is the last dam against the muddy tide of commercialism.”[8]

Postwar historians, notably Fritz Ringer (1934-2006), argued that many of the stereotypes contained in Händler und Helden were “common property in academic circles” at the time.[9] However, more recent reassessments have shown that most of Sombart’s university colleagues found his dyspeptic tirade against all things English and strident chauvinism distasteful and embarrassing, which served to isolate Sombart from the academic mainstream. Even so, the book was reviewed positively by the doyenne of German economists, Gustav Schmoller, in his widely-read Jahrbuch, who saw in it a confirmation that the socialist “Saul” had finally fully converted to a nationalist “Paul”. Despite its “one-sided value judgments”, Schmoller wrote, “every good German will read it with pleasure.”[10] That endorsement gave Sombart’s views greater credence in wartime Germany than they might have otherwise had. It is certain that Sombart’s tract helped overheat already boiling anti-English sentiment that would in turn play a role in the public pressure to resume unrestricted submarine warfare after its suspension in 1915. His tirade against capitalism, which Sombart had already tied to the “Jewish spirit” in his prewar scholarship, likely contributed to a worsening climate of antisemitism that would culminate in the controversy over the notorious Jewish census in the German army in 1916-1917. Sombart also became increasingly hostile to the German political left during the war, which he associated with internationalism, Jewish influences, defeatism, and pacifism. The themes and arguments in Händler und Helden and the development of Sombart’s wartime thinking thus aligned him with the younger, more radical elements of the “conservative revolution” that anticipated fascism and Nazism. Indeed, Sombart would later praise Benito Mussolini (1883-1945) and embrace the National Socialist regime. 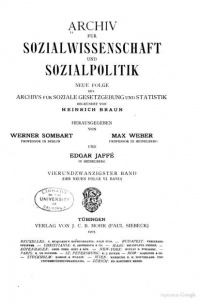