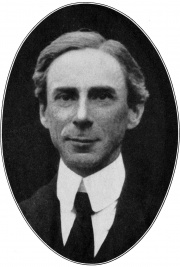 This article examines how the outbreak of war in 1914 established Bertrand Russell’s reputation as social critic with an international audience. It considers his major writings on a range of topics, from foreign policy to the psychological impulses that make war possible, and his work on behalf of conscientious objectors.

The First World War marked a turning point in Bertrand Russell's (1872-1970) life. He had been born into one of the leading families of the liberal and reformist political establishment. Prior to the war, Russell worked primarily in an academic context at Trinity College, Cambridge, producing - with Alfred North Whitehead (1861-1947) - the influential Principia Mathematica (1910), which set out to explore how mathematics could be founded on the new formal logic, and was underpinned by Russell's guiding philosophical motivation, the "quest for certainty."[1] He would never totally abandon his "optimism rooted in the doctrine of progress, though of a more qualified variety [owing to the war], and no longer viewed as inevitable."[2]

The Outbreak of War↑

Like many liberals, Russell's experience as an opponent to the Boer War informed his critique of the 1914-1918 conflict; the Asquith government's declaration of war on 4 August 1914 shattered his waning faith in the Liberal Party and the competence of the British ruling class. He wrote to his friend Margaret Llewelyn Davies (1861-1944) that "I never believed so frightful a thing could happen...it is utter madness for us to join this war."[3] He became a vocal critic of British foreign policy - as well as an advocate for a new social and political order - consciously operating on the international stage. He was prolific in his exploration of the ethics of war: he lectured and published letters, articles, pamphlets and books reinforcing his belief that "the force that in the long run makes for peace and all other things is Reason, the power of thinking against instinct."[4]

Russell remained unconvinced by the argument that defence of Belgium created a legitimate pretext for the British declaration of war. In 1916, the National Labour Press published his assessment of The Policy of the Entente, 1904-14. Russell was careful to introduce the work by stating that he felt compelled to write as "I love England"; he viewed the war as a threat to "European civilisation"[5]. The critique offered alternative scenarios whereby the British Empire renounced further imperial expansions, surrendered the right of capture at sea, concluded arbitration treaties and used its considerable influence as a creditor nation to "further liberal ideas, to prevent oppression and to promote democracy",[6] thereby negating the potential for war in the future. Policy was published with the subtitle, "A Reply to Professor Gilbert Murray". Gilbert Murray (1866-1957) was a long-time friend of Russell's whom he felt was too comfortable in toeing the liberal party line. Reflecting on the war's opening months, he recalled the feeling of disorientation and isolation as "one by one, the people with whom one had been in the habit agreeing politically went over to the side of the war". This was, he said, the "most difficult period in which to keep one's head."[7]Policy also articulated the motivations behind Russell's engagement in the Union of Democratic Control, although he was underwhelmed by its effectiveness. Increasingly he focused his attentions more directly on American public opinion, which he felt was open to dissent about the war's ethical context and more likely to put pressure on the Allies to negotiate peace. His open letter to President Woodrow Wilson (1856-1924) appeared in various national papers on 23 December 1916, but did not have the desired effect.

Russell was forty-two years old when the war broke out, and was thus ineligible for the army and for full membership in the No-Conscription Fellowship (NCF). As an associate member he contributed to the organisation's magazine, the Tribunal, assisted conscientious objectors (COs) facing tribunals and visited those serving prison sentences. In April 1916, he published the pamphlet Two Years Hard Labour for not Disobeying the Dictates of Conscience on behalf of the CO Ernest Everett (1882-c.1930), which led the Foreign Office to prosecute him under the Defence of the Realm Act (DORA). Friends and critics interpreted this as a ruse designed to keep Russell from travelling to lecture in the United States. The Daily News and Leader observed on 2 September that, despite a lack of coherent evidence, "...the Government have preferred to treat an Englishman of distinction as though he were an alien of suspicious antecedents, presuming apparently on the unpopularity of his views to protect their conduct from inconvenient criticism"; on 5 September Henry William Massingham (1860-1924) published a letter in The Times arguing that the administration of DORA was "in the hands of men who do not understand their business".[8] This prosecution and public controversy that ensued over the course of the spring and summer of 1916, coupled with Russell's work on behalf of the Union of Democratic Control, ultimately led to his dismissal from Trinity College; many of the Junior Fellows - including a number on active service - objected. Russell resigned from the NCF in 1917. He was prosecuted again by the government and received a prison term of six months for "insulting an ally" (the Americans), and was released from prison in September 1918.

Russell produced two serious works on the psychological causes of war and its ethical context: Justice in Wartime and Principles of Social Reconstruction (1916). The former contained three long, influential essays that initially appeared in the Atlantic Monthly in 1915; the latter is, in the words of Alan Ryan, his "most considered piece of political argument", offering "his vision of a society whose members would be too content with peace to be anxious to resort to war."[9] Over the course of the war, Russell extended his criticism to religious elites who actively engaged in what he viewed as the war's mindless patriotic "mass hysteria."[10] In his 1925 essay, What I Believe, he drew the following parable about religion, war and the dangers implicit in a public consciousness motivated by fear:

In the Middle Ages, when pestilence appeared in the country, holy men advised the population to assemble in churches and pray for deliverance; the result was that the infection spread with extraordinary rapidity among the crowded masses of supplicants. This was an example of love without knowledge. The late war was an example of knowledge without love. In each case the result was death on a mass scale.[11]

For all that Russell's public stance on the First World War was guided by abstract theories on the institutions and psychological impulses that enable and sustain war, he maintained an awareness of its specific costs in human terms. He viewed with fascination and anguish the conflict’s implications for people and international relations: writing about the Russian revolution and Bolshevism, he noted that "to face the hostility of the world may show heroism, but it is a heroism for which the country, not its rulers, has to pay the price."[12]

The war years were, for Russell, years of frustration and, at times, humiliation, revealing the limits of one man's vision, despite the appeal of his central message coupled with his influential political and intellectual networks. Yet he honed and ultimately retained the sense of moral purpose that would influence his public writings in reaction to a series of catastrophic 20th century wars until his death in 1970 (aged ninety-seven). Perhaps, he wrote - appalled, but marshalling himself for agitation in August 1914 - someday "we shall emerge into a saner world."[13]