Defence of the Realm Act (DORA)

The Defence of the Realm Act (DORA) afforded the British government extraordinary emergency powers during the First World War. DORA’s remit was expansive, and grew in severity throughout the war, though public reaction was generally muted. DORA’s application in Ireland was harsher, where it was used to institute martial law.

The Defence of the Realm Act (DORA) was an Act of Parliament, passed on 7 August 1914 and extended several times thereafter, granting extraordinary wartime emergency powers to the British government during the First World War. DORA was intended purely as a wartime measure, but remained in effect in various capacities until 1921. Through its multiple expansions DORA became a considerable legislative tool for wartime social, economic, and industrial control, though the act itself was mostly a framework justifying emergency powers and defining sedition. Specific powers were outlined in individual Defence of the Realm Regulations (DORRs). “DORA” eventually became synonymous with wartime state powers in general, and was a familiar target of satirists.[1]

The Defence of the Realm Act was passed three days after Britain’s entry into the war. It was refined and extended with a further bill on 28 August 1914, and superseded by the Defence of the Realm Consolidation Act on 27 November 1914. Two further amendments were made in 1915: the first restored the guarantee of a civil trial instead of a military court martial for those arrested under DORA, the act’s most contentious feature, while the second afforded greater government control of munitions creation, foreshadowing the later Munitions of War Act. Approximately 260 individual DORRs were introduced to operationalize the act, covering areas beyond censorship and the management of dissent, to economic and labour management, social controls around consumption of alcohol and food economy, and even regulations for the containment of venereal disease.[2]

Though DORA met with some criticism and opposition, in general the British reaction to DORA was resignation if not acceptance. DORA was designed to represent the government’s preparedness and seriousness in response to the war, and accordingly was seen by many as a necessary sacrifice[3] The government’s careful application of its new powers likewise kept opposition to DORA low. Even after DORA’s expansion and increased application against dissenters from 1917, the government continued to exercise caution and moderation, and never applied DORA to its fullest coercive potential.[4] Furthermore, DORRs were just as likely to be applied to censure over-enthusiastic pro-war propaganda, as to dissenting or pacifist propaganda.[5] Nevertheless, DORA was a dramatic extension of state power, and DORRs became more socially invasive from 1917, particularly the introduction of new regulations regarding venereal disease control, regardless of how moderately these regulations were applied.[6]

DORA was applied more directly in Ireland. DORA’s initial application was similarly moderate in Ireland as in mainland Britain.[7] British authorities used DORRs against Irish agitators accused of sedition from at least November 1914, though these initial arrests were generally directed against separatists specifically accused of undermining the war effort or assisting the enemy, rather than for separatist agitation outright.[8] Arrests increased from 1915, as the Allies’ declining military fortunes made British authorities less tolerant of any Irish nationalist agitation. It was after the Easter Rising of 1916, however, that the enforcement of DORA significantly expanded, in particular as a means of introducing martial law in Ireland, representing DORA’s most extensive and repressive application. Furthermore, after the Rising, the 1915 amendment allowing civilians a choice of civil trials over court martial was suspended in Ireland.[9] Despite this more expansive use of DORA in Ireland, a degree of moderation continued.[10] Again, DORA’s expansive scope and license meant that even here it was not applied to its fullest possible extent. DORA remained in effect in Ireland until 1921, when the very similar Restoration of Order in Ireland Act (ROIA) replaced it.[11]

DORA was not atypical compared to other belligerent governments’ emergency powers, though France and Germany’s emergency powers tended to be justified through more established, familiar, even venerated political traditions: état de siège in France, which carried revolutionary associations, and Kriegszustand in Germany. Conversely, critics saw DORA as a break with Britain’s liberal tradition, without respectable precedent.[12] DORA inspired very similar legislation throughout the British Empire, particularly in the Dominions. Canada’s War Measures Act, Australia’s War Precautions Act, and New Zealand’s War Regulations Act all borrowed in intent and format from DORA.[13] Some Dominion Acts went even further than the original: Australia’s War Precautions Act, for instance, consolidated more emergency powers under one law than DORA.[14] While these emergency acts met with a similar mixture of resistance and acceptance as had DORA in Britain, they served the same function of reassuring imperial audiences that the Dominions were seriously committed to the war. 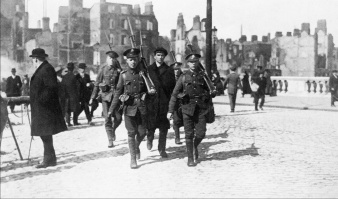