The Belgian Force Publique occupied Ruanda and Urundi in 1916 after taking control of Lake Tanganyika from the Germans. This enabled the local populations and individuals to use the change in power for their own ends, on the one hand, and Belgium to negotiate at the peace table as needed, on the other hand.

In August 1914, Ruanda (later Rwanda) and Urundi (later Burundi) were provinces of German East Africa. Their position in the northwest corner of the German colony along Lake Tanganyika and at the confluence of various rivers, as well as being part of the Great Rift Valley, meant that the territories were extremely fertile and densely populated, with 1.5 million people in Urundi and 3 million in Ruanda. The colonising countries Germany, Britain and Belgium all sought to control the territories. Occupation would allow Britain to complete the Cape Town to Cairo railway line, which had been started by Cecil John Rhodes (1853-1902) and taken on by imperialists as a sign of British power.[1] For the Germans, continued occupation would thwart Britain’s imperial desires, whilst the Belgians would have German territory to swap for German-occupied Belgian territory at the end of the war.

Colonial Conflicts in East Africa during the War↑

According to the 1885 Berlin Treaty, the area was meant to remain neutral in the event of war. However, confusion created by the outbreak of World War I provided an opportunity to occupy territory in neighbouring areas. This was mainly the case in German East Africa, where the Germans extended control into Belgian territory. The Germans’ control of Lake Tanganyika and dominance in the Kivu region deterred the Belgians from attacking. In addition, despite their limited numbers (eleven civil servants and forty soldiers), the Germans maintained the allegiance of the local chiefs, such as Yuhi V Musinga, Mwami of Rwanda (1883-1944) in Ruanda, who supplied them with labour and produce as needed.[2] Supported by the Germans, who relied on his loyalty, Musinga in turn used the war to attempt to consolidate his power; however, his people attempted to overthrow him and his court representatives. This led to unrest in the area and caused Musinga’s subjects to support the Belgian invasion during 1916.

On 18 April 1916, Brigade Sud under Scandinavian Olsen moved across Lake Kivu into Gombo and then Shangungu, occupying Musinga’s capital, Nyanza, on 19 May 1916. Olsen’s 2nd Regiment moved into Ruzizi before occupying Usumburu on 6 June 1916. Brigade Nord’s 3rd Regiment under Molitor moved through British Uganda to occupy Kigali on 9 May 1916. During these moves, the 4th Regiment kept the Germans distracted at their bases. Ruanda was occupied on 21 May 1916. The day after, Molitor joined Olsen at Nyanza and the encirclement of Urundi began. Urundi came under Belgian control on 17 June 1916, the Belgians having occupied Kokawani and Nyawiogi en route to Kitega, the capital.

The Belgian Force Publique totalled 16,670 and was comprised of 11,367 askari (soldiers), 2,500 ruga ruga (irregular auxiliaries) and 2,712 Europeans. They faced German Max Wintgens’ force of eighteen Germans and 115 askari in Ruanda. In Urundi, four Germans, 165 askari and 100 ruga ruga were initially led by Karl Schimmer (1877-1915) and then by resident Erich von Langenn-Steinkeller (1872-1917). Schimmer was killed on 12 January 1915 when the Germans raided Belgian Luvungi, a loss which greatly demoralised the remaining forces.

The unrest caused by the people rising against their chief Musinga provided the Belgians with a lever to consolidate their power once in control of the territory by working with the suppressed. This empowered those who could mediate between their own people and the European forces; for example Max Wintgen’s servant Serufugi defected to the Belgians. Local inhabitants made the most of the conflict and ensuing skirmishes to increase their cattle herds and form a new elite. Few were used as porters or in other military capacities; instead, Ugandan porters were preferred as they reduced the risk of internal uprisings in Congo. Little else is known of the impact on the local populations.

Belgium claimed the captured territory from the start and managed it as an integral part of the Congo. On 27 June 1916, military residents were installed, followed a year later by a royal commissioner. In January 1918, civilian residents were appointed. The 1919 Treaty of Versailles confirmed Belgian occupation and in 1922, the territories became mandates. On 22 March 1921, Usui, Ujiji and Gisaka in Ruanda and Buguki in Urundi were transferred to Britain. However, the railway line was never completed because the first transcontinental flight between London and South Africa took place in 1922, thus negating the psychological need for a transcontinental line.[3] 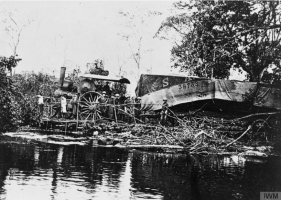