Askari is a word that means “soldier” or “police” in Kiswahili, Arabic, Turkish and a number of other languages. Colonial powers in many parts of eastern, central and southern Africa used the term widely to refer to the African soldiers who fought in their armies in Africa. During World War I, askari of the German East African colonial army, the Schutztruppe, gained a reputation as highly effective and dedicated troops. Following Germany’s defeat, a “loyal askari” myth developed that celebrated their service to Germany, while ignoring the negative effects of colonial rule on the peoples of German East Africa.

The Askari of the German East African Schutztruppe↑

The word askari simply means “soldier” or “police” in a number of languages, including Arabic, Turkish and Kiswahili. Colonial armies operating in eastern, central and southern Africa applied the name to their rank-and-file African soldiers, regardless of the soldiers’ particular regional, linguistic or ethnic origins. The askari of the German colonial army (Kaiserliche Schutztruppe für Deutsch-Ostafrika, or Schutztruppe) became widely known owing to their role in the East African campaign of World War I. German officers first assembled a colonial army to suppress the Abushiri rebellion against German commercial interests in East Africa in 1889-1890. The troops they recruited to this initial army came from northeastern Africa (Sudanese or Nubi men who had fought against the Mahdi in Sudan in the 1880s), Portuguese East Africa (Zulu or Shangaan men recruited from around Inhambane) and eastern Africa. These eastern African recruits included Swahili, Nyamwezi and Manyema men drawn from in and around German East Africa, and included former retainers of the Deutsch-Ostafrikanische Gesellschaft (German East Africa Company). The Germans paid their recruits very well, and also elevated them to relative positions of privilege vis-à-vis other colonized Africans. For these reasons, Schutztruppe askari had few incentives to look elsewhere for employment until the demise of German strength during World War I. In this regard, they likely fared better than their British, Belgian and Portuguese counterparts in the surrounding colonies.

Between 1890 and 1914, the askari of the German colonial army were primarily responsible for the territorial conquest of German East Africa, as well as for the day-to-day policing and administration of the colony. Their roles in the suppression of anti-colonial resistance, particularly during the Maji Maji War of 1905-1908, established their reputation as ruthless agents of colonial violence, whose scorched earth methods spelled disaster for many East African communities. Their officers trained them to operate in small formations with little oversight, and to maneuver with great speed and independence. They were also organized into eighteen field companies of 150-200 askari apiece, and each company had its own porter contingent and medical doctors. By contrast, in 1914 the British King’s African Rifles (KAR) was organized into three battalions, which used a cumbersome and comparatively weak eight-company format that was more suited to confronting a European enemy than the Schutztruppe. A fourth battalion, the 2 KAR based in Nyasaland, was disbanded in 1911, with many of its soldiers then crossing into German East Africa to join the Schutztruppe.

The askari wore standardized uniforms, and a typical military rank hierarchy structured their organizational relationships, with white German officers and NCOs at the top. This meant, in effect, that race played a defining role in the military hierarchy as well. Senior askari took on day-to-day leadership roles in small unit combat operations, and conducted training for the rank-and-file. Using the privilege they gained through their positions in the colonial administration, and the resources they gathered through plunder and wages, many of them built lives as local big men, assembling large households around them, and often acquiring pieces of land and herds of livestock that displayed their privilege and authority to those around them living under colonial rule.

The Askari in World War I↑

When World War I began, the Schutztruppe, under the command of Colonel (later General) Paul von Lettow-Vorbeck (1870-1964), numbered some 1,100 askari, but recruitment drives pushed their numbers up to between 11,000 and 12,000 by late 1916. In the first half of the war, most askari were longer-term members of the Schutztruppe or volunteers. The Germans scored some successes in battle against their Allied opponents, most notably at Longido and Tanga in November 1914. But in the second half of the war, as wartime conditions in German East Africa worsened, the Schutztruppe increasingly failed to attract new recruits, and began resorting to forcible conscription of able-bodied men on a larger scale. As the Schutztruppe’s situation deteriorated, the army became confined to the southern half of the colony, with the Allies dominating the northern half. Following the Battle of Mahiwa in October 1917, where both sides suffered massive casualties, Lettow-Vorbeck led his column across the border into Portuguese East Africa. There, the askari and other column members lived off the land, seizing what they could from captured Portuguese forts along the way. Women, children and forcibly conscripted porters also accompanied the column as it marched through Portuguese East Africa, evading Allied capture for the rest of the war. In September 1918, his column re-entered German East Africa, and then crossed into Northern Rhodesia. Finally, after receiving news of the armistice in Europe, the Schutztruppe surrendered at Abercorn, Northern Rhodesia, on 25 November 1918. Some 1,100 askari were present at the formal surrender.

During and after World War I, the askari of the Schutztruppe gained widespread notoriety for their fighting skills, as well as for their supposed dedication and loyalty to Lettow-Vorbeck, and by extension, to the German Empire. The truth was more complicated. Most askari who remained to the end of the campaign were men who had been members of the Schutztruppe when the war began, and thus viewed it as the protector of their long-term interests. Thousands of others died in the war, became captives or deserted the army, often ending up in the ranks of the British colonial army in East Africa, the KAR. In particular, in April 1917 the British created the two battalions of the 6 KAR in order to make use of captured ex-German askari. In an interesting twist, these askari may have included men who had joined the Schutztruppe following the disbanding of the 2 KAR in Nyasaland in 1911. They had come full circle.

Askari after the War↑

After the war, the Allies interned the remaining Schutztruppe askari in prisoner-of-war camps, where many died of influenza. Following their release from detention, the British victors ordered them to return to their homes, offering no compensation or support. Many former German askari thus lived out their lives in relative poverty, although Lettow-Vorbeck and sympathetic groups in Germany worked steadily to secure back pay and pensions for the veterans. The Schutztruppe askari were not the only African veterans of the war whose expectations for pensions or other kinds of compensation were dashed by post-war colonial authorities. In this regard, African colonial soldiers of World War I bore much in common with veterans everywhere.

The myth of Schutztruppe askari loyalty to the German cause lived on well into the latter part of the 20th century, despite a general lack of widespread interest in Germany’s colonial past, and despite the terrible violence they perpetrated against the peoples of German East Africa. These aspects of the meaning of the word askari have also had afterlives in other contexts far removed from German East Africa. In apartheid South Africa, African National Congress members who became informants, spies or operatives for the South African government were called askari – a direct reference to their willingness to work for the colonial power to secure their own interests. In World War II, Soviet prisoners of war recruited as SS auxiliaries also earned the nickname of askari for the roles they played in guarding the death camps at Belzec, Sobibor and Treblinka, and in clearing the Warsaw Ghetto in 1943. These usages of the word askari demonstrate the need for more explicit linkages between askari wartime behaviors and the postwar narratives their actions generated well beyond 1918. 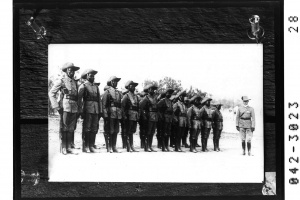 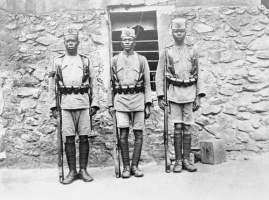 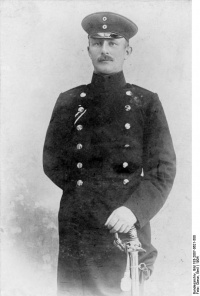 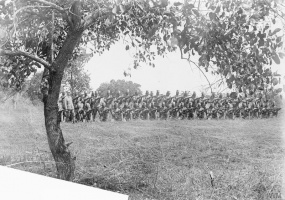 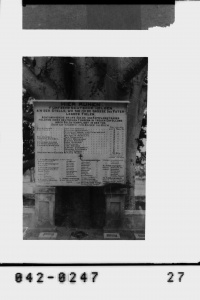 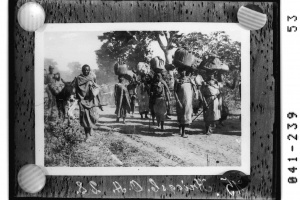