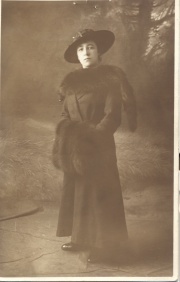 Gabrielle Petit was a secret intelligence agent working for the British General Headquarters (GHQ) in occupied Belgium. She collected information on the German Sixth Army in the Tournai-Lille area. She was condemned to death and executed in the spring of 1916. She became a fervently commemorated emblem of civilian valor in post-Armistice Belgium.

Gabrielle Petit (1893-1916) was born in Tournai in 1893 in a downwardly mobile middle-class household. At age nine, after the death of her mother, she was sent to an orphanage. Denied the chance to study for a teacher’s degree, she left school at fifteen and worked service jobs in Brussels (nanny, shop-girl, laundry supervisor, waitress), largely estranged from her family and drifting in between rented rooms until she was taken in by her neighbor, a working-class woman from Tournai named Marie Collet. In early 1914, she met a young man named Maurice Gobert, an aspiring career officer in the Belgian army, and they got engaged.

When war broke out, Petit enlisted with the Red Cross. Gobert was wounded during a sortie from Antwerp. He recuperated in hiding and joined Petit in occupied Brussels in May 1915. Both decided to leave Belgium: Gobert to rejoin the army, Petit to enlist as a nurse. They made their way separately into the neutral Netherlands and did not meet again; Gobert ended the engagement over (unjustified) suspicions that Petit had betrayed him to the German police.

Petit, traveling from the Netherlands to Britain, was recruited on board ship by an agent working for the British GHQ (Wallinger Bureau), who persuaded her to return to occupied Belgium to gather military intelligence. She received training in London and crossed back into occupied Belgium in mid-August 1915. Her task consisted of “roaming” observation in the border area between Hainaut province and northern France, situated in the staging area (Etappengebiet) of the German 6th Army. Petit relied on relatives in Tournai to help. In Brussels, she enlisted the help of her neighbor, Marie Collet. She sent in a series of reports spanning from August 1915 through January 1916.

Roaming widely, mostly on foot, she reported on the aftermath of the Battle of Loos, the thickening defense belt in the Tournai-Lille sector, and the presence and state of troop reinforcements. To smuggle her reports to the Netherlands, she relied on a succession of couriers; through this conduit, her small network was infiltrated by a mole working for the counterintelligence department of the German Political Police in Brussels. This department had reached full strength during the months of Petit’s operation, and was able to dismantle a wide swath of spy networks. Petit and Collet were arrested in February 1916.

Interrogated for a month, Petit did not name names, and, as a result, was put on trial on 2- 3 March 1916, together only with Collet. She was condemned to death at the behest of the military prosecutor, Eduard Stoeber (1871-1960), who in October 1915 had requested the death penalty for Edith Cavell (1865-1915). Collet was acquitted. Petit was not executed immediately: after the outrage following Cavell’s execution, capital condemnations of women had to be upheld at the highest level. Petit herself refused to sign an appeal to demonstrate her rejection of German military justice.

After Moritz von Bissing (1844-1917), governor general of occupied Belgium, refused to commute the sentence, the matter was referred to the Imperial Military Court in Berlin, which, endorsed by the emperor, upheld the condemnation, citing Petit’s “superior intelligence,” “energetic” activity, and “extremely insolent” behavior at her trial. She would be the first woman executed behind the Western Front since Cavell; the decision showed that the wish to punish threats to the imperial army outweighed the risk of scandal. The gamble paid off: there was no scandal. Because Petit had few contacts and her trial was held behind closed doors, there was no pardon campaign on her behalf, and her execution, on 1 April 1916, went largely unnoticed.

Petit’s name did not become widely known until May 1919, when public fervor in post-occupation Belgium coalesced around her image. Petit was declared Belgium’s “national heroine” against the backdrop of a general quest to make sense of the past occupation, and in a time when Belgian claims to valor had difficulty asserting themselves internationally. Through 1919-1923, the Petit “cult” – expressed in poetry, drama, and prose in both French and Dutch, as well as music and a movie – provided a means to think through the issues of the occupation and its legacy. Two bronze monuments were built in her memory in Brussels (1923) and Tournai (1924).

After that, the fervor abated, but she remained an oft-invoked epitome of civilian heroism into the second occupation and postwar. Her memory flared up once more around the 50th anniversary of her execution. After that, as the very notion of national self-immolation receded, Petit’s memory retreated into local lore, into heavily genderized representations, or into ironic postmodern readings.