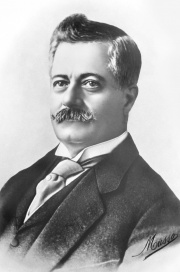 Epitácio Pessoa served as the president of Brazil between 1919 and 1922. He led the Brazilian delegation to the Paris Peace Conference. He was also a member of the Permanent Court of International Justice in The Hague.

Epitácio Pessoa (1865-1942) belonged to a traditional oligarchic family in northeast Brazil. Pessoa obtained a law degree and was a member of the Republican Party of Minas Gerais. Later, he served as prosecutor, congressman, senator, minister of justice and internal affairs, procurator of the Republic, and minister of the federal supreme court. He headed the Brazilian delegation at the Paris Peace Conference and was the only Brazilian member of the Permanent Court of International Justice in The Hague between 1921 and 1930. He died in Petrópolis, Rio de Janeiro, on 13 February 1942.

Pessoa at the Paris Peace Conference↑

Countries including the United States, France, Italy and England formed a powerful group at the Paris Peace Conference, exercising more decision-making power than countries like Brazil. Pessoa disagreed with the creation of this group, as it resulted in two different categories of participants. In his opinion, all countries should participate with similar rights in the peace negotiations. Nevertheless, Pessoa resolved two relevant issues for Brazil. First, the Germans finally repaid the amount from the sale of Brazilian coffee (deposited at the Bleichröder Bank) that had been confiscated after the Brazilian declaration of war. This was outlined in article 263 of the Treaty of Versailles. In addition, Pessoa ensured that the forty-five German vessels that Brazil had seized after the declaration of war were recognized as Brazilian property. Pessoa intensified the close relations between Brazil and the United States during the negotiations, enabling Brazil’s participation in the commission that wrote the League of Nations covenant. As a result, Brazil received one of four non-permanent seats in the League’s Council.