Patrick Pearse was one of the leaders of the 1916 Easter Rising in which the Irish Republican Brotherhood (IRB), an extremely nationalist organization, attempted to establish an independent Ireland by force. His execution was an important catalyst for the growth of republicanism for which he long remained the chief ideologue.

Patrick Pearse (1879-1916) became prominent through his involvement in the Irish language movement in which he established himself as a public speaker and a figurehead for extreme nationalism. The son of an originally Protestant English sculptor and a Catholic Irish post office employee, he acquired his interest in the Irish language through his education at the Congregation of Christian Brothers. His initial nationalism was of a cultural rather than a political nature, believing that the Irish should focus on preserving their unique identity by fostering the use of their language and culture rather than on achieving independence. As a teenager, he joined the Gaelic League and edited their journal, Claideamh Soluis, from 1903 to 1909. Although the official status of the language was eventually amended, Pearse grew convinced that a more active policy was needed, and so in 1908 he founded his own bilingual secondary school St. Enda’s.

As a result of the radical opposition of unionists to the proposed introduction of home rule for Ireland after 1910, Pearse’s nationalism became more and more political. Although the proposal was supported by the liberal government, Pearse gradually lost his belief in their ability to implement it. The militarization of Western society in the years before the war also affected him, as he began to favor the use of force. This came to the forefront in his writing, in which he emphasized the need for a blood sacrifice. It follows that he was involved in setting up the Irish Volunteers in 1913 and became their Director of Operations. His oratory talents and inspirational writings convinced leading conspirators in the underground Irish Republican Brotherhood that he would be a great asset to their cause. He was sworn into the movement in early 1914 and was later co-opted on its Supreme Council and the secret Military Council, which organized the Easter Rising of 1916.

Although home rule legislation was passed by parliament, the outbreak of the war meant that its introduction had to be postponed, confirming the extreme nationalists’ suspicions about England’s intentions. Meanwhile, the war also provided an opportunity for a successful rebellion. Pearse became central in the propagation of revolutionary ideas. Although he had been appointed Commander in Chief, Pearse played a mostly inspirational role during the Rising. The rebellion was put down in six days. Its principal leaders, including Pearse, were court-martialed and executed immediately following the trial. The Rising and consequent harsh reaction of the authorities, as well as the long duration of the war swayed a large part of the Irish population towards republicanism, resulting in Sinn Féin’s election victory in 1918 and the concomitant growth of the Irish Republican Army (IRA), the successor organization to the Irish Volunteers.

Never achieving full independence for a united Ireland, the IRA and its successor organizations have remained active to this day. As one of its first ideologues of cultural and political nationalism, and considered a martyr for the cause by many, Pearse became the measure of true nationalism to the IRA and non-violent nationalists alike. His support of the use of physical force only turned problematic for many with the outbreak of the conflict in Northern Ireland in 1969. 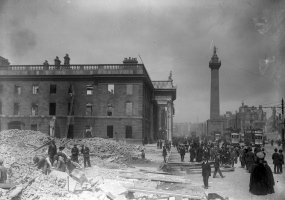 The rebels’ headquarters after the Easter Rising