The campaign for Irish Home Rule lasted from 1870 until 1914. When Home Rule became a realistic possibility in 1912, a period of political turmoil ensued. Parliamentary solutions to the impasse were overtaken by the emergence of rival armed paramilitary groups.

Home Rule was the demand of the overwhelming majority of the Irish electorate between the general elections of 1885 and 1918. Irish constitutional nationalists sought the return of a domestic legislature to Ireland, having been under direct rule from Westminster since the Act of Union of 1801. Home Rule was essentially devolutionist in its demand although the term devolution was repugnant to most Home Rulers who saw it as a lesser form of autonomy. Home Rule bills were brought before parliament in 1886 and 1893 but were defeated in the Commons and the Lords respectively. A third Home Rule bill proposing the establishment of a bicameral all-Ireland legislature with defined powers was introduced in April 1912. Unionist opposition to the bill was intense on both sides of the Irish Sea but came increasingly to centre on Ulster where the island’s protestant and unionist minority were most heavily concentrated.

Crisis on the Eve of Continental War↑

The Ulster and Irish Volunteers – paramilitary volunteer forces calling for Ulster’s exclusion from Home Rule and for the defence of a non-partitionist Home Rule settlement respectively – were established in January and November of 1913. Both forces secured arms, most spectacularly through the importation of weapons and ammunition from Germany. Unionist arms were landed along the north Antrim coast in April 1914 and smaller consignments of arms were landed by the Nationalist Irish Volunteers on 26 July and 1 August. The two volunteer forces were under the control of elected parliamentarians by the summer of 1914 and their combined numbers were close to 250,000 volunteers – on paper at least. Following the threatened refusal in March 1914 of British army officers stationed at the Curragh Camp, fifty kilometres southwest of Dublin, to impose Home Rule on Ulster, the British government’s confidence in the military’s reliability in Ireland was deeply shaken. By July, George V, King of Great Britain (1865-1936) ventured that “today the cry of Civil War is on the lips of the most responsible of my people.”[1]

The Ulster crisis was diffused by the outbreak of the First World War with unionists and Home Rulers rallying behind the crown and pledging their support for imperial defence. The third Home Rule bill was placed on the statute book as the Government of Ireland Act (4 & 5 Geo. 5 c. 90) on 18 September 1914. However, an accompanying amending act suspended its operation for the duration of the war in Europe and pending resolution of the Ulster question. Approximately 200,000 Irishmen fought in the First World War.

The 1916 Rising derailed the prospects of Home Rule being implemented as planned. In 1918, the Irish Parliamentary Party – who represented the home rule demand in parliament – were delivered a resounding defeat by Sinn Féin. As the inheritors rather than the instigators of the 1916 Rising, Sinn Féin stood for the establishment of an Irish republic and adhered to a policy of parliamentary abstention from Westminster.

A fourth Home Rule bill was passed as the Government of Ireland Act (1920) offering a two state solution. Whereas Irish nationalism had now evolved beyond Home Rule and demanded a separatist republican settlement, Ulster unionists accepted the offer of a northern parliament governing six of the nine counties of Ulster. Ironically, this made Northern Ireland the only part of the island in which a home rule settlement was implemented. Nationalists in Ireland’s other twenty-six counties rejected the 1920 settlement, continuing their military independence struggle until a truce in July 1921 paved the way for a settlement establishing a partitioned Irish Free State in 1922. 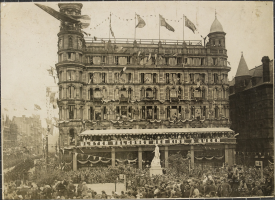