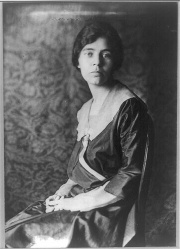 Alice Paul was an American suffragist and political rights activist. Jailed repeatedly for her activities running up to and during World War I, her work in the United States led to the passing of the 19th Amendment and the introduction of the Equal Rights Amendment.

Alice Stokes Paul (1885-1977) was born in 1885 to a prominent Quaker family. Her mother, Tacie Parry Paul (1859-1930), was an early suffragist, and one of the first women to attend Swarthmore College. Raised in the Quaker tradition of service and social justice, Paul’s mother took her as a child to early suffragist meetings.

In 1905, Paul received a Bachelor of Arts from Swarthmore, and in 1907, she completed a Master of Arts in sociology at the University of Pennsylvania. After completing her degree, Paul moved to England. There she visited a number of institutions, organizations, and lectures. At one of these lectures, she met Christabel Pankhurst (1880-1958), a leader of the Women’s Social Political Union (WSPU). In 1908, Paul became an assistant to Pankhurst, and participated in the direct action campaigns of the English suffragist movement. These actions included confrontations with the police, hunger strikes, and forced feeding. Paul was repeatedly arrested during this period for her political activities, and learned how to use publicity of particular actions to gain attention for the movement.

Following a third arrest, Paul returned to the United States to complete a doctorate in sociology at the University of Pennsylvania. She remained politically active during her studies, attending the National American Woman Suffrage Association’s (NAWSA) annual meetings. There she was nominated, with friend Lucy Burns (1879-1966), by the organization’s vice president Jane Addams (1860-1935) to the National Congressional Committee.

Activism during World War I↑

On 2 March 1913, Paul and other suffragists in the NAWSA organized a massive political parade. Some 8,000 participants representing women from the working and upper middle classes marched through the streets of Washington D.C. Anti-suffragist male hecklers, angered by the march and political demands, attacked the participants before the parade was finished. With insufficient police protection, rioting ensued, injuring some 200 people.

Due to disagreements with the NAWSA leadership, who charged Paul with being too aggressive with tactics involving direct action, Paul and Burns eventually broke with NAWSA in 1914 to form the National Woman’s Party (NWP) in 1916. The NWP relied on nonviolent, publicly visible actions directed at the government. Newly elected President Woodrow Wilson (1856-1924) soon became a target for the protesters. On 10 January 1917, the NWP began picketing the White House, demanding the vote for American women. Referred to as the “Silent Sentinels”, the protesters relied on public visibility and press coverage to increase awareness, and more importantly to elicit a reaction from the White House.

Prison and “Night of Terror”↑

As the United States readied for entry into World War I, the NWP increased its efforts to force Wilson to act on the issue of suffrage. Officials reacted with arrests, convictions, and sentencings to the Occoquan Workhouse. There, Paul and the eighty-one other women engaged in a hunger strike.

Prison authorities then force fed the activists, while Paul was threatened with commitment to an insane asylum. During this time, Paul continued to be both a leader and figurehead for the movement, and suffragists increasingly used Wilson’s own ideals and words concerning democracy against his administration. Although the messages the suffragists used during this period included general statements for women’s political equality, the campaign also increasingly used direct references to the war, charging that if Wilson were to push for democracy abroad, he must first foster it at home. Authorities continued to target the picketers outside the White House. On the evening of 15 November 1917 (the “Night of Terror”), guards beat the protesters, resulting in several injuries.

The press reacted negatively to these developments, forcing Wilson to work with Paul and the NWP. Although extensive lobbying, closed door meetings, and quieter campaigns were instrumental, and included a number of groups, Paul and her activities served as a highly public arena to not only gain Wilson’s support, but also raise the issue of suffragism to a national audience. Wilson eventually agreed to push for a Constitutional Amendment if the protesters eased pressure. In 1919, Congress passed the amendment, and in 1920, the states ratified it.

After passage of the 19th Amendment, Paul continued her activism, drafting what became known as the Equal Rights Amendment (ERA) that Congress voted to accept in 1972. However, not enough states ratified. For the rest of her life she worked on trying to secure its passage, passing away in 1977 in her home state of New Jersey. 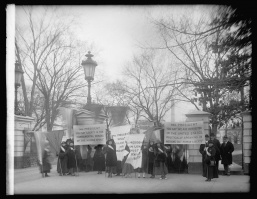