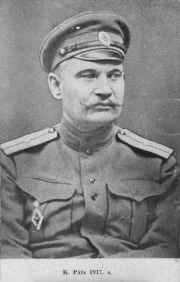 Konstantin Päts, a leading Estonian politician, was a key figure in the establishment of Estonian independence during and after World War I. In 1934, he and Johan Laidoner organized a putsch and Päts became an authoritarian ruler.

Life before World War I↑

Konstantin Päts (1874-1956) was born in Pärnu County in the Government of Livonia in a peasant family. He obtained his education at the orthodox clerical seminar in Riga and at Pärnu high school. He studied law at the University of Tartu (1894-98) and served afterwards as a one-year volunteer in the Russian army. Beginning in 1900, Päts was active in Tallinn: from 1900-01 as an assistant barrister and from 1901-05 as editor of the radical newspaper Announcer (Teataja). In 1904, he was elected a member of the town council and in 1905 he became deputy mayor. During the revolutionary days of 1905, Päts organized the opposition forces and in December 1905 had to flee first to Switzerland and later to Finland. On return to Estonia (1909) he received a nine-month prison sentence for revolutionary activities. From 1911-16 Päts edited the newspaper Tallinn Announcer (Tallinna Teataja).

In 1916, Päts was mobilized as a reserve officer into the Russian army and served in Tallinn in different functions. During the same time, he participated in the work of the Tallinn branch of the All-Russian Union of Cities. In 1917, after the February Revolution, Päts served as head of militia, was active in the Union of Estonian Societies, was a member of the workers’, soldiers’ and inhabitants’ council, and led the All-Estonian People’s Represantives’ Congress, among other activities. Päts participated as a member of the Estonian military bureau in the formation of national units and from July 1917 as the chairman of the Estonian soldiers’ high committee. On his initiative, close contacts were established with Ukrainians serving in Tallinn, who strongly supported the idea of national units. Päts took active part in applying for and implementing Estonian autonomy. In June 1917, he was elected a member of the Estonian Provincial Assembly (Maapäev) and in October 1917, he became chairman of the Provisional Government. He acted only shortly as head of government, because the Bolsheviks came to power and subsequently took over the Estonian Provisional Government. Päts was then arrested. After release he hid, but continued to participate in talks discussing the possibility of Estonian independence.

Striving for Statehood and War of Independence↑

In February 1918, the Bolshevik and Russian soldiers began to flee from Estonia in view of a German invasion. Estonian national circles entertained the hope of using the interregnum to declare independence. For this endeavor, the Estonian Salvation Committee was formed on 19 February 1918 with Konstantin Päts, Konstantin Konik (1873-1936) and Jüri Vilms (1889-1918) as members. The committee participated in taking power in Tallinn and declaring independence as well as forming the Provisional Government. This government started to act on 25 February 1918 with Päts as prime minister and minister of the interior. During the German occupation, Päts encouraged passive resistance, kept contact with Estonia’s representatives abroad and protested against the proposed United Baltic Duchy. In connection to this he was arrested and imprisoned from June to November 1918. After returning to Tallinn, the Provincial Assembly confirmed the new government on 27 November 1918 with Päts as prime minister and minister of war. One day later, the Estonian War of Independence (Vabadussõda, 1918-20) started. In his position, Päts played a key role in decision-making concerning starting military resistance, building up armed forces and acquiring help from abroad.

Päts left the government in May 1919 due to the formation of the Constituent Assembly. At that time he was already a member of the agrarian party founded in 1917. As a representative of the Farmers’ Assemblies, he was elected a member of the Constitutional Assembly in 1919, then five times as a member of the Estonian Parliament Riigikogu (1920-34) and in 1922-23 as speaker of parliament. In the years 1921-22 and 1923-24, Päts served as state elder (prime minister), after which he relinquished executive power and concentrated his efforts on parliamentary work and business. He became head of the Estonian-Russian Chamber of Commerce and the Estonian Chamber of Commerce and Industry. He chaired the Tallinn Stock Exchange Committee, initiated the founding of the Chamber of Agriculture and participated in different private enterprises. During the Great Depression, Päts returned to political office and served twice as state elder (1931-32, 1932-33).

Since the mid-1920s, Päts had applied for a change of constitution and the creation of a presidency. On his initiative, the agrarian party presented draft acts in parliament (1926, 1929) and conducted propaganda for changing the constitution before the corresponding plebiscites (1932, 1933). Opposed to the radical right-wing movement of the League of Veterans, Päts announced in October 1933 that his party supported the nearly authoritarian constitution compiled by the League. After the new constitution passed successfully, Päts again became state elder.

At the beginning of 1934, Päts became a candidate for state elder (according to the new constitution, in essence the president), but before the elections he led a coup d’état together with Johan Laidoner (1884-1953). After that, he governed Estonia as an authoritarian ruler, officially referred to as “acting state elder” (1934-37), “president-regent” (1937-38) and “president of the republic” (1938-40). Together with Commander in Chief Laidoner and the head of government, Kaarel Eenpalu (1888-1942), Päts introduced permanent martial law, dissolved parliament, replaced the banned political parties by state corporative institutions and a one-state party (the Patriotic League), restricted political rights, introduced censorship, and increased the role of the state in economics. He also inspired the third Estonian constitution (1 January 1938), which legalized his regime.

After the outbreak of World War II, Päts was in favor of caution and compromise towards the USSR. As a result, he signed the Soviet-Estonian Mutual Assistance Treaty on 28 September 1939, which allowed the Red Army to establish bases in Estonia. In the summer of 1940, after the Soviet occupation, Päts signed all documents compiled on Soviet pressure. He was forced to resign on 23 July 1940 and deported with his family on 30 July 1940. Until the German-Soviet War, he lived under surveillance of state security in the city of Ufa. On 26 June 1941 he was arrested. In 1941-43 Päts was held in prison and after this was forced to undergo treatment in psychiatric hospitals. He died on 18 January 1956 in the Burashevo mental hospital. In 1990, Päts’ remains were reburied in Tallinn. His family members were either arrested and deported or fled to the West.

Ago Pajur, University of Tartu