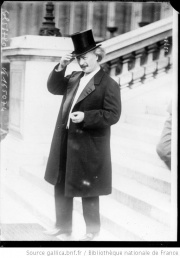 Ignacy Jan Paderewski was a virtuoso pianist. He made use of his popularity in the United States and western Europe to propagate the idea of Polish independence and state sovereignty. In 20th century Poland, he became a symbol of patriotism and devotion to the national cause.

Ignacy Jan Paderewski (1860-1941) was born into a family of petty landowners. His ancestors participated in the struggle for Polish independence by taking part in the anti-Russian January Uprising (1863–1864). He maintained a firm conviction about the necessity of acting for the sake of the homeland deprived of independence, and this remains his political legacy. Paderewski’s greatest passion, however, was music. In 1887 he debuted on stage, initiating a series of successful concerts across Europe and the Americas.

Paderewski used his success to establish contact with important politicians and disseminate knowledge about the so-called “Polish question.” He chose to open his concerts with patriotic speeches, and he promoted the works of Frederic Chopin (1810–1849), another Polish composer. He also inserted into his own compositions motifs referring to Polish folk music and events from the history of Poland.

In his speeches Paderewski did not mention the territory or political system of a future Poland, and avoided all references to controversies in Polish public life. However, he believed that he was capable of uniting Poles around a pro-independence slogan. Paderewski acted along the same lines after the outbreak of war in 1914, even though he was convinced the conflict would end with victory for France, Russia, and Great Britain.

The activity that most gratified Paderewski proved to be his charity work. In Switzerland in 1915, he and the acclaimed writer Henryk Sienkiewicz (1846–1916) established the General Relief Committee for the Victims of the War in Poland. Collecting funds from well-wishers, Paderewski simultaneously carried out an intense propaganda campaign intent on enabling Poland to join the family of free nations. His initiatives in the United States proved to be particularly fruitful: he managed to establish close contacts with Colonel Edward House (1858–1938), one of President Woodrow Wilson’s (1856–1924) key advisers. Consequently, in January 1917 Paderewski presented a memorandum at the White House concerning the situation in Polish lands. In August of the same year, the Polish National Committee in Paris, which played the part of a Polish representative in the Entente, appointed Paderewski its delegate in the United States.

During his time in the United States, Paderewski traveled across the country, shaking the hands of members of the Polish community, appearing at meetings held by Polish émigrés, and giving concerts and speeches that testified to his considerable talent as an orator. In doing so Paderewski mobilised his fellow countrymen to support the anti-isolationist strategy of President Wilson, counting on a favour in return. Indeed, he was repaid in 1918 when the President, already the leader of a nation at war, presented a programme for a future peacetime order. Point 13 of Wilson’s “Fourteen Points” statement announced: “An independent Polish state should be erected which should include the territories inhabited by indisputably Polish populations, which should be assured a free and secure access to the sea, and whose political and economic independence and territorial integrity should be guaranteed by international covenant.”[1]

The supportive stance taken by President Wilson enhanced Paderewski’s prestige. As a result, he was able to promote, among the Polish community, the idea of creating the core of a Polish army in the United States. This issue become topical when the United States joined the war; according to Paderewski’s conception, the mobilised Poles were to be grouped in separate units under Polish banners. The American government did not approve this idea, nor did it hinder the enlistment of volunteers into the so-called Blue Army, a Polish unit created in 1917 in France upon the initiative of the Polish National Committee. Ultimately, 20,000 volunteers from the United States joined the Blue Army.

Paderewski regarded his activity on the American continent as a patriotic mission, emphasising the lack of any personal ambition. Nevertheless, he inevitably became a “political persona” and the Polish community believed that he alone could unite the émigrés and the Poles in general. The Entente considered Paderewski a better candidate for Polish leadership than the anti-Semitic Roman Dmowski (1864–1939), or Józef Piłsudski (1867–1935), whom it sometimes perceived as a radical with Bolshevik leanings. It is not surprising, therefore, that when Paderewski decided to return home in November 1918, Great Britain placed a Royal Navy battleship at his disposal.

On 1 January 1919 Paderewski was greeted by cheering crowds in Warsaw. The mood was upbeat but the situation in Poland was difficult. Poland did not have a frontier or a stable currency, and the country needed to create an administration and, first and foremost, an army. Various political groups competed for power, and the controversies involving them were frequently intense and violent. Prolonged disputes could prove harmful for Poland, weakening its ability to survive. Leaders of the strongest political camps, Dmowski and Piłsudski, were well aware of the fact that a compromise was needed. On 16 January 1919 the outcome was a national conciliation government headed by Paderewski as prime minister.

The new prime minister entrusted the majority of the daily tasks to his co-workers, while he became involved mainly in diplomacy. In April 1919 he and Dmowski functioned as Polish delegates to the Paris Peace Conference. Paderewski maintained a conciliatory stand in Paris; his opponents at home accused him of excessive compliancy and gullibility. Paderewski defended his policy by drawing attention to the fact that the Versailles Treaty brought Poland freedom and independence, which only five years earlier the majority of the Poles regarded as an unattainable goal.

The government, however, proved incapable of dealing with economic problems and resigned at the beginning of December 1919. In February 1920 Paderewski left the country and returned to his musical passions, but he continued to observe the events transpiring in Poland.

Paderewski treated wartime defeat and the partition of Poland in 1939 as a personal tragedy. He witnessed the collapse of a country whose independence had been his driving force for much of his life. When institutions of Polish statehood in exile were established in France, Paderewski appeared to be a natural candidate for the office of president, but ill heath deprived him of this chance. Like many of his compatriots, Paderewski believed that a French victory would bring a breakthrough for Polish sovereignty. When this conviction collapsed in the wake of the French capitulation, Paderewski left Europe for the United States, thus in a certain sense reviving the mission he conducted during the First World War.

In the spring of 1941 the artist became ill with pneumonia; he died in New York City on 29 June 1941. President Franklin D. Roosevelt (1882–1945) recommended that Paderewski be buried at Arlington National Cemetery. In 1992, independent Poland honoured its great patriot by bringing his coffin home and placing his remains in the crypt of the arch-cathedral of St. John in Warsaw. 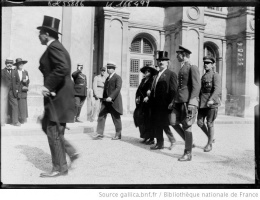