Navy Squadron in the Mediterranean (Japan)

Responding to the British request for further support to the Allied war efforts, the Imperial Japanese Navy dispatched a squadron to the Mediterranean Sea. From April 1917, a Japanese flotilla was based at Malta, playing an important part in anti-submarine convoy escort duty along the Mediterranean sea lines.

Japan and the First World War↑

Japan declared war against Germany in 1914 in the spirit of the Anglo-Japanese Alliance of 1902, with the aim of capturing the German base of Qingdao on mainland China and occupying the German Marshall, Caroline, and Marianas (except Guam) island groups in Micronesia.

Qingdao was taken on 7 November 1914 by a largely Japanese land and naval force, with token British participation. Moreover, said German island groups in Micronesia had been occupied by Japan.

The Imperial Japanese Navy also helped escort ANZAC troop carriers across the Indian Ocean. Some of its warships took part in the hunt for the German light cruiser Emden in the East Indies and Indian Ocean, and for Admiral Maximilian von Spee’s (1861-1914) German East Asiatic Squadron in the Pacific Ocean.

Until 1917, Japanese forces stayed mainly in the Asia-Pacific region.

Between August 1914 and early 1917, Japan was asked several times to contribute more to the Allies, but the government turned down all requests primarily for logistic reasons.

Besides its interest in Qingdao and the western Pacific, Japan also wanted to consolidate its position in China, as exemplified by the presentation of the “Twenty-One Demands” of 1915, and to secure a voice at a peace conference after the war.

The Imperial Japanese Navy, which had long advocated Japan’s advance to the south as opposed to the army’s desire for northward advance, was among the most powerful driving forces behind Japan’s entry into war.

By 1917, German and Austrian submarines operating in European waters were sinking Allied shipping at an alarming rate. A constant stream of reinforcements was needed for the war of attrition at the Western Front. Without the Mediterranean route Allied troops would have had to go all the way around the Cape of Good Hope. Responding to the British request for further support in the Mediterranean, Japan sent a naval force because it received a tangible promise in return: the Allies would support Japan’s claims to former German possessions, which it then occupied. From April 1917, the Second Special Squadron, consisting of eight destroyers with a flagship cruiser Akashi under the command of Rear Admiral Kōzō Satō (1871-1948), was based at Malta. It played an important and efficient part in anti-submarine convoy escort duty against German and Austro-Hungarian U-boats along the communication sea lines between Malta and Marseille, Taranto, and Alexandria. A further four brand-new destroyers arrived in Malta in August 1917 as the 15th Flotilla with the armored cruiser Izumo to add to the Japanese commitment. Izumo arrived in the Mediterranean to relieve Akashi as flagship. Apart from these warships, two British destroyers, Minstrel and Nemesis (renamed Sendan and Kanran respectively) were handed over to the Japanese navy in June 1917 and manned by its sailors for the duration of the war. In addition, two British sloops, renamed Tokyo and Saikyo, were also in the Mediterranean. At its peak strength, the Japanese navy numbered seventeen warships. Furthermore, twelve destroyers made by the Japanese were handed over to the French navy and were active during the entire war.

Germany had declared the policy of unrestricted submarine warfare in February 1917, and casualties among the Allied transports increased dramatically.

Though nominally independent, the Japanese actually carried out whatever orders they received from the British admiral superintendent at Malta, George A. Ballard (1862-1948). The Japanese navy carried out 348 escort missions for 788 Allied warships and transports and 750,000 personnel. Thirty-four combat operations were reported in the Mediterranean, without a single U-boat sunk or destroyed.

Naval Escort Mission in the Mediterranean↑

Three episodes are worth mentioning. First, in May 1917 two Japanese destroyers engaged in a rescue operation, saving British personnel from the transport Transylvania, which was sunk by German torpedoes, while the German U-boat was still in the vicinity. 3,000 of the 3,300 personnel were rescued. Though this escort mission failed as the Japanese destroyers could not protect the transport, King George V (1865-1936) awarded military medals to twenty-seven Japanese officers and sailors in recognition of the rescue operation.

Secondly, the Japanese destroyer Sakaki was torpedoed and badly damaged by the Austrian submarine U-27 on 11 June 1917 off Crete. The fifty-nine dead included the captain, Commander Taichi Uehara (1881-1917). Later, Sakaki was salvaged and repaired.

Thirdly, in the face of the German spring offensives of 1918, in April and May the Allies employed the so-called five “Big Convoys” between Marseille and Alexandria, transporting more than 100,000 Allied troops. They were escorted mainly by Japanese destroyers, with a minimum loss of transports.

Thus, the Japanese navy helped the Allies to maintain sea control in the Mediterranean, for which especially the British were grateful. G. C. Dickens (1879-1962), flag commander to the commander-in-chief of the British Mediterranean Fleet, reported back to the admiralty that, whereas Italians are inefficient, French are unreliable, Greeks are out of the calculation, and Americans are too far away, the Japanese are excellent, but small in number.[1] He also praised the Japanese navy’s ratio of time at sea to time in port, which was the highest of any Allied navies during the war.

Though historians like Ian Nish and Paul Halpern see the Imperial Japanese Navy’s commitments during the First World War as considerable, outside conventional appreciation by historians of the Japanese naval effort appears rather forgotten. Memories of the Second World War certainly overshadow those of the First. Racial animosity on the part of the Allied, especially after the Paris Peace Conference and the Washington Conference, could be another reason why the memory of the Japanese contribution was so short-lived.

In fact, some historians, including Arthur J. Marder (1910-1980), even regarded Japan’s role during the war as that of a “jackal state.” However, for example, Japan’s acquisitions in Qingdao and the formerly German Islands in Micronesia were in line with the sacrifices and support it rendered to the Allies, if compared with the “spoils of war” the Allies obtained after the war.

In recognition of the Japanese naval effort, in 1918 a memorial was built at the Commonwealth War Graves in Malta, commemorating the seventy-eight Japanese sailors who fell in the Mediterranean. Seventy-three of them are buried there. The memorial was destroyed by a German air raid during the Second World War at the Battle of Malta and then left unattended until it was reconstructed in 1973.

In relation to major battles of the First World War, on land or on water, the Japanese naval commitment and casualties in the Mediterranean may appear a small footnote. The importance of logistics or supplying the theatre of war, however, should not be underestimated. Another important point to mention would be the consequences of the powerful image of this and other Japanese efforts portrayed in domestic media. Even though the military contribution might have been tiny in terms of real numbers, the perceived contribution to the war effort was substantial in the Japanese public eye and might help to explain the widespread contempt expressed in the Japanese press when Japanese demands were not met in Paris or only at the cost of a protracted “media war”, i.e. with the Chinese delegation.

The lessons of the Mediterranean operations, including the importance of the guerre de course, of blockade, of submarine and anti-submarine warfare, and the value of the merchant navy and convoy systems, for example, were neither properly learned nor implemented in its policy by the Imperial Japanese Navy in the 1920s and 30s, as the Second World War in the Pacific shows. 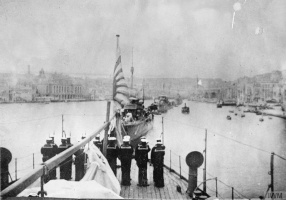 Japanese Navy in the Mediterranean 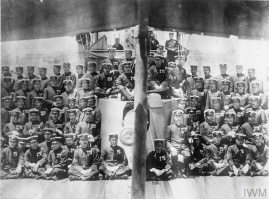