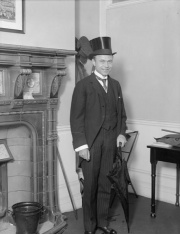 This article offers a brief survey of the Canadian-born newspaper baron, Max Aitken, later known as Lord Beaverbrook, and his role in World War I. In 1916, Aitken created the Canadian War Records Office to promote the achievements of the Canadian Expeditionary Force. In 1918, British Prime Minister Lloyd George appointed him Minister of Information to direct the British propaganda efforts in support of the war.

William Maxwell Aitken (1879-1964) was born in Maple, Ontario, the son of a Scottish-born Presbyterian minister. Within a year, the growing family had settled comfortably in Newcastle, New Brunswick, where father William preached at St. James’s Church. Max was a restless loner who showed an early talent for making money, whether through selling newspapers, soap subscriptions or insurance policies.

Aitken’s early financial success with the Royal Securities Corporation, which he joined in Halifax in 1903, came from a range of profitable investments in both Canada and the Caribbean. Within a year of sailing for London in 1908, Aitken raised capital for three of the biggest Canadian business mergers of the time. For these he was both praised and vilified. He quickly nurtured fruitful business and social relationships in the UK with, among other figures, newspaper owner Alfred Charles William Harmsworth, Lord Northcliffe (1865-1922) and Rudyard Kipling (1865-1936). As his wealth grew, he entered British politics. With the help of New Brunswick-born Andrew Bonar Law (1858-1923), in December 1910 Aitken won a seat in the British House of Commons for the constituency of Ashton-under-Lyne. When he received a knighthood in 1911, the brash, ambitious, self-made millionaire was just thirty-two years old.

The war found Aitken well-placed within both British and Canadian circles. In 1915, he maneuvered to become the Canadian government’s official eyewitness in London, writing weekly columns on the war’s progress for the Canadian and international press. In January 1916, Aitken established the Canadian War Records Office, whose staff chronicled the achievements of the Canadian Expeditionary Force (CEF). That same month he published the first volume of Canada in Flanders. In it, Aitken drew upon well-established stereotypes to publicize the role of the CEF. He described it as a pan-Canadian enterprise, its men drawn

from the workshop and the offices of her cities, from the lumber camps of her forests, from the vast wheat fields of the West, from the farms and orchards of the East, from the slopes of the Rockies...the manhood of Canada hurried to arms.[1]

His heroic accounts of the Second Battle of Ypres (April-May 1915) helped forge the enduring myth that the war marked Canada’s entry into nationhood. In their focus on the courage of regular troops, not just officers, Aitken’s “patriotic, sanitized and uncritical” accounts became extremely popular with both Canadian and British readers.[2]

Aitken also understood the importance of documenting the Canadian war effort through photography, film and art. In April 1916, Aitken appointed a Canadian official war photographer. These photographs were sometimes staged or doctored, but they received wide public circulation. So did the footage produced after Aitken first embedded cinematographers into the CEF during the Somme battles in the summer of 1916. In establishing the Canadian War Memorial Fund in November 1916, Aitken provided opportunities for Canadian painters such as A.Y. Jackson (1882-1974) and Fred Varley (1881-1969), as well as British artists Wyndham Lewis (1882-1957), William Orpen (1878-1931) and Augustus John (1878-1961).

Aitken’s relationship with Bonar Law made him a political go-between, especially during the formation of David Lloyd George’s (1863-1945) coalition in December 1916. His reward for giving up his parliamentary seat was “relegation” (his words) to the House of Lords in January 1917.[3] Now styled the 1st Baron Beaverbrook he took his name from a small community near his childhood home. In February 1918, Lloyd George appointed him Minister of Information to direct British propaganda efforts in support of the war. Beaverbrook worked to rally the British press lords on behalf of the war effort; however, cabinet wrangling limited his attempts to organize British information campaigns. He left the position in October 1918.

After the war, Beaverbrook steadily nurtured his position as a successful, influential but mistrusted press baron. By the late 1930s, the Daily Express, which he had acquired during the First World War, boasted a daily circulation of over 2 million. Despite his conservative leanings, Beaverbrook’s papers took a fiercely independent stand. They opposed the League of Nations, supported Empire Free Trade and British isolationism. Beaverbrook also remained a stubborn and late supporter of German appeasement, and a consistent backer of the Soviet Union. Soon after Winston Churchill (1874-1965) became prime minister in May 1940, he appointed Beaverbrook Minister of Aircraft Production.

Still restless into the 1950s, Beaverbrook returned to his studies of British wartime politics that he had started with Politicians and the War, 1914-1916 (1928, 1932). Critics later insisted that these works exaggerated his role in British politics during the First World War. The same is true of Men and Power, 1917-1918 (1956) which again drew from his own “intimate knowledge of events and persons” to portray British wartime leadership, including his own. The final chapter, “The Hero,” praised David Lloyd George’s leadership in the final defeat of Germany, and the victory of the British empire.[4] Written in the waning days of the empire, the work seems dated. His study of Lloyd George was published a year before his death at his home, Cherkley Court, in June 1964.

Despite his own writing and business success, Lord Beaverbrook could not fully salvage what he felt was his own uneven political career. Perhaps his most important legacy lay in his efforts to collect a record of the First World War. If not for Beaverbrook’s energy, the Canadian wartime record simply would not exist. The photographs and art he commissioned from the period offer a rich source for those interested in the war’s cultural legacy. More broadly, the papers Beaverbrook acquired of such figures as Andrew Bonar Law, David Lloyd George, Lady Megan Lloyd George (1902-1966) as well as Lord George Curzon (1859-1925) are important sources for future studies of the First World War. 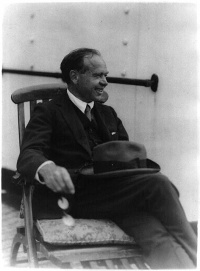