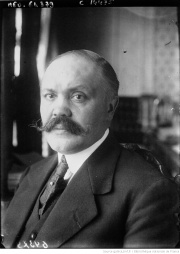 Louis Loucheur was a French industrialist and politician. From December 1916 until the end of the war, he served as undersecretary of state for artillery and munitions and later as armaments minister. After the war, he continued a brilliant political career until his early death in 1931.

Louis Loucheur (1872-1931) was born in the industrial city of Roubaix in northern France and completed his education at the prestigious École Polytechnique in Paris. He started his professional career as a construction engineer in the railway company Chemins de Fer du Nord, but in 1899, he founded his own construction enterprise, which in 1908 was transformed into the Société Générale d’Entreprises (SGE). It carried out large infrastructural projects both in France and abroad.

When the war broke out, Loucheur first served for several months as an artillery lieutenant. However, he soon returned to civilian life and started producing the munitions that the French army so desperately needed. With great success, he built up factories for the production of shells, gunpowder, and later, asphyxiating gas in Lyon, Paris, and other places. In December 1916, thanks to his many contacts among members of the government, Loucheur became undersecretary of state for artillery and munitions in the newly formed Armament Ministry, now led by the socialist Albert Thomas (1878-1932). When Thomas left the government in September 1917, Loucheur succeeded him as armaments minister, a post he kept until the end of the war. Especially under Georges Clemenceau (1841-1929), with whom he built a close working relationship, Loucheur was part of the inner circle of governmental power.

Loucheur was a new type of politician, a technocrat and self-made man who had no earlier party affiliation and whose only political capital was his success in business and his extraordinary organizational skills. When he took over the Arms Ministry, Loucheur basically maintained the state interventionsm initiated by his socialist predecessor. During his time in office, he further centralized the responsibility for the French arms production in his ministry: the production and distribution of raw materials, the administration of labour (marked by growing unrest in 1917/18), and the production of munitions and weapons (including tanks and aircraft). His overall record was positive. Despite difficult circumstances, the production of munitions and weapons remained on a high level until the end of the war, even if – as his political opponents in press and parliament often complained – Loucheur did not always reach the extremely ambitious figures he had promised.

After the war, when the Armaments Ministry was transformed into the Ministry of Industrial Reconstruction, Loucheur remained in office and favored an end to the wartime state interventionism (étatisme) and a return to prewar liberalism. In 1919, he was the leading economic advisor to the French delegation at the Versailles Peace Conference. If he shared Clemenceau’s position regarding security guarantees and reparations, he was nevertheless aware that in the long term, economic cooperation with Germany would be unavoidable. Reconstruction and economic cooperation in Europe continued to be the most important issue in Loucheur’s political activities during the 1920s, when he served several times as minister in various governments and played a major role in the French Chambre des députés. He now became closely associated with Aristide Briand’s (1862-1932) European policy and today can be considered to be one of the spiritual fathers of Europe’s economic unification. On 22 November 1931, Loucheur died of a heart attack. 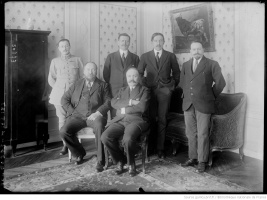 Louis Loucheur and his cabinet