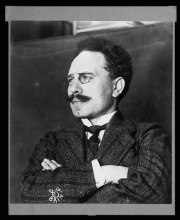 Karl Liebknecht was the leading German socialist opponent of the First World War. He was the first member of parliament to vote against the financing of the war. On 1 May 1916 he was arrested and imprisoned for giving an anti-war speech in central Berlin. He was a controversial figure during the Revolution of 1918-19 who advocated a Bolshevist style proletarian revolution. He was murdered on 15 January 1919.

Karl Liebknecht (1871-1919) was the son of Social Democratic Party founder Wilhelm Liebknecht (1826-1900). He studied law and economics at the Universities of Leipzig and Berlin, and he earned a doctorate at Würzburg University in 1897. Together with his brother Theodor Liebknecht (1870-1948) he opened a legal practice in Berlin in 1899. In 1900, he joined the Social Democratic Party and married. In 1907 he was convicted of treason and sentenced to one and a half years imprisonment for the publication of his pamphlet “Militarism and Anti-militarism”. By the beginning of the First World War he had been elected to the Prussian Parliament and the German Reichstag (German parliament). In 1911 his first wife died and in 1912 he remarried.

In the years before the First World War, Liebknecht was one of the best-known left wing members of the Social Democratic Party. In August 1914, although he privately opposed the war and the leadership’s policy of Burgfrieden (agreeing to a truce with former political opponents until Germany’s enemies were defeated), he nevertheless publicly voted in favour of war credits in the interest of maintaining party unity. Horrified by the conduct of the German army during the invasion of Belgium and France, and severely critizised by the rank and file in his constituency of Potsdam-Spandau-Osthavelland, he soon abandoned this position. He was the first German parliamentarian to vote against the extension of war credit in the Reichstag on 2 December 1914. This placed him outside of the national community and increasingly made him a hated figure among large swathes of the German political elite.

In 1915 Liebknecht was enlisted as an Armierungssoldat – a member of a military unit that provided labour to the fighting divisions and which consisted of men unwilling or not permitted to directly bear arms (for example, because of criminal records or poor health). In this role he experienced life on the Eastern Front and was directly involved in the clearing of bodies. As an enlisted man he was forbidden from engaging in any political activity beyond speaking in the Prussian and German parliaments. Together with a small but increasing number of socialist opponents of the Social Democratic Party policy of Burgfrieden, including Rosa Luxemburg (1871-1919), he founded the Group International which was later named the “Spartacist league.” The group began to publish a series of illegal anti-war and pro-revolutionary writings, including Klassenkampf gegen den Krieg ("Class War against the War") and Der Hauptfeind steht im eigenen Land ("The Main Enemy is in your own country"), two of Liebknecht’s most important anti-war polemics. In early 1916 Liebknecht was one of very few German politicians to publicly question the German government’s response to the massacre of Armenians by their Ottoman-Turkish allies. A day after raising this issue in the Reichstag, he was expelled from the parliamentary party (Reichstagsfraktion) of the Social Democratic Party because of his opposition to the war and criticism of the party leadership. On 1 May 1916 he organized an anti-war demonstration on the Potsdamer Platz in central Berlin where he was arrested when he publicly spoke out against the war. He was stripped of his parliamentary mandate and eventually sentenced to four years and one month imprisonment.

In April 1917 the Spartacist group loosely joined the newly founded Independent Socialist Party, the breakaway group that formally left the Social Democratic Party. Even though the politics of the Spartacist League and the Independent Socialists differed considerably, at this time, after the Independents had split the Social Democratic Party in two, both groups felt that any further division would result in the splintering of the socialist anti-war left. Only weeks before the armistice of 11 November 1918, Karl Liebknecht was released from prison on 23 October 1918, following a Social Democratic Party supported amnesty for political prisoners. Despite his best efforts to inspire revolution from the capital he had no influence on the outbreak of the German Revolution in Kiel on 3 November and its spread across Germany during the following week. By the time of his release from prison, he was a committed supporter of the Russian Bolshevists, even if other members of the Spartacist League and the Independent Socialists were less supportive of the violence of the Russian revolutionaries.

On 9 November, he attempted to gain leadership over the revolutionary movement in Berlin, proclaiming that Germany was now a socialist Republic. He rejected attempts to co-opt him into joining the compromise revolutionary government. On 10 November 1918, his lack of support among soldiers and workers in the German capital was evident when his proposals were rejected in favor of those of his hated opponents in the Social Democratic Party at a key revolutionary assembly. From mid-November until his murder in mid-January 1919, he attempted to gain the support of workers and soldiers in Berlin. However, although demonstrations involving Liebknecht provoked fears among all opponents of further revolution, his attempts to inspire further revolution and gain a mass following were largely unsuccessful. At the end of December and in early January he was among the Berlin-based radical groups which founded the German Communist Party.

On 5 January when unexpectedly large anti-Social Democratic demonstrations took place in Berlin in support of the Independent Socialist police chief Emil Eichhorn (1863-1925), he supported a radical proposition to call out workers to seize power. This was the starting point of the January Uprising (also problematically known as the Spartacist Uprising or the Liebknecht Uprising). The rebellion was brought to an end on 11 January after government soldiers took control of the handful of buildings held by the rebels. From 6 January until its collapse, Liebknecht supported the rebellion and opposed a negotiated end to the violence. On 15 January, together with Rosa Luxemburg, he was discovered in hiding in the west-Berlin suburb of Wilmersdorf and brought to the Eden Hotel where he was handed over to Waldemar Pabst (1880-1970), a determined anti-revolutionary conspirator. Badly beaten on his way out of the hotel, he was taken to the Tiergarten where he was shot several times at close range. His body was taken to a morgue as an unidentified man. His murderers later claimed that he had been shot while trying to escape.

For the remainder of the 20th century, Liebknecht was among the most important symbols of German Communism. In the spring of 1919 the Social Democratic government’s failure to actively prosecute his killers led many of Liebknecht’s sympathizers to conclude that he had been murdered with their active support – an accusation that Pabst later claimed was true but which remains unproven. He became central to the liturgy of Communist politics in the Weimar Republic and once again to the East German state. In 1926 the Communist Party sponsored a monument in memory of Liebknecht and Luxemburg at the Friedrichsfelde graveyard where they were buried in eastern Berlin. The monument was later destroyed and the graves desecrated by members of the Nazi Sturmabteilung (SA) in 1933. In 1951, Liebknecht received a new grave (alongside Rosa Luxemburg) in the East German state’s monument to the socialist dead. His anti-war politics were also idealized by many West Germans, especially among students in the 1960s and 70s. He remains among the best-known German opposition figures from the era of the First World War. 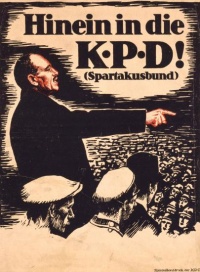