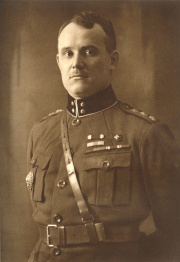 Johan Laidoner, Estonian general and statesman, started his career in the Russian army during World War I. He was crucial in establishing an Estonian army, which he commanded in the War of Independence (1918-20). In 1934 he participated in a coup d’état, bringing an authoritarian regime to power.

Johan Laidoner (1884-1953) was born on a rented farm in the government of Livonia. In 1901 he joined the Russian army as a volunteer and served for one year in the infantry regiment in Kovno. In 1902-05 he attended the Vilno Infantry Military School and in 1909-12 he studied in Saint Petersburg at the Nicholas Military Academy. Between 1905-09 and 1912-13 he served as a subaltern officer in one of the guard regiments. In spring of 1913 Laidoner became an officer of the general staff and was promoted to commander of a company in the 1st Caucasian Riflemen. A few months before the outbreak of the Great War he was transferred to the department of staff transport in the Caucasus Military District.

With the outbreak of World War I, Laidoner, an adjutant in the staff of the 3rd Caucasus Army Corps, was sent to the southwestern front, where he participated in the successful Russian offensive in Galicia. Already during the first battles he was noted for his analysis, talent for organization and his decision-making skills. In March 1915, Laidoner was attached to the staff of the 21st Infantry Division and his unit fought in rearguard action from the Carpathians to Belarus. From October 1915 until March 1917 he served on the Western Front as the right hand of the head of the intelligence department. After the February Revolution Laidoner was transferred to head of staff of the Caucasus Grenadier Division and participated in the failed Kerensky Offensive in July 1917. On 26 September 1917, he was promoted to head of staff of the 62nd Infantry Division. Due to political agitation, the division’s combat strength had already declined and the officers had to exert great effort to maintain discipline. The situation became even more difficult with the Bolshevik putsch in October 1917.

During the same period, Estonian national units were organized and Laidoner was offered the position of commanding officer of the 1st Estonian Infantry Division. Because of Russian military leaders’ delaying tactics, he was not able to assume duties in his new office until late December 1917. As head of this division, Laidoner led the creation, completion and supply of Estonian national units. However, he was forced to fight against the Bolsheviks’ subversive influence. Due to this, Laidoner abstained from his earlier apolitical viewpoint and started to support the idea of an independent Estonian state in cooperation with national politicians. On 19 February 1918, five days before the Estonian Declaration of Independence, the Bolsheviks liquidated the staff of the 1st Estonian Infantry Division. Laidoner, freed from his position, left Estonia because of the threat of German invasion. For Laidoner, World War I ended on 3 March 1918 with the Peace Treaty of Brest-Litovsk between Bolshevik Russia and the Central Powers. By the end of war, Laidoner had received seven Russian military decorations.

In 1918 Laidoner worked in Petrograd as an aide of the Estonian representative. On his initiative, Estonian soldiers who had fled from home were assembled in North Russia, where they constituted an Estonian legion and fought together with Entente expedition corps against the Red Army. When World War I ended, the Estonian government invited Laidoner home, where on 28 November 1918 the Estonian War of Independence (Vabadussõda) against Bolshevik Russia started. Laidoner was quickly appointed commander in chief. On his initiative, combat-ready armed forces were created, the Red Army’s offensive was stopped, the enemy was thrown back beyond state borders and the army successfully defended itself against further attacks. In addition, during the so-called Landeswehr War (June 1919), the German Free Corps were destroyed. For his merits in the War of Independence, Laidoner was promoted to lieutenant general.

Life in the Republic of Estonia↑

On 27 March 1920 the position of commander in chief was dismantled and Laidoner was enlisted on the reserve list. After this he joined the largest agrarian party in Estonia (Farmers’ Assemblies) and was elected on their list three times as a member of the Estonian Parliament, where he headed parliamentary commissions for finances, defense, and foreign affairs. He also served several times as head of the Estonian delegation at the congresses of the League of Nations and participated in the 1925 Conference for Control in the International Traffic of Arms and the World Disarmament Conference of 1932-33. During and after the failed communist uprising in Tallinn, Laidoner briefly became commander in chief of the Estonian forces again (December 1924 to January 1925). Before the elections in 1929 he announced that he would not run for parliament and left his party. After leaving parliament, Laidoner went into business and served on the boards and councils of various larger enterprises.

During the Great Depression, Laidoner returned to politics. After he and Konstantin Päts (1874-1956) led a coup d’état on 12 March 1934, in which democracy was replaced by an authoritarian regime, Laidoner received the post of commander in chief for the third time. As military commander, Laidoner concentrated on questions of defense and expressed steady interest in international relations. As a result, Laidoner was later accused that Estonia was defenseless when, at the beginning of World War II, Soviet pressure began – defenseless in both a military and international relations sense. He was also accused of promoting submission instead of an armed fight for independence and of signing the Soviet-Estonian Mutual Assistance Treaty with Moscow, allowing the establishment of Red Army bases in Estonia.

The Final Years under the Soviets↑

After the Red Army occupied Estonia on 17 June 1940, Päts, under Soviet pressure, divested Laidoner of the office of commander in chief. In July 1940, Laidoner was deported from Estonia to the Russian town of Penza, where he lived under supervision of state security. After the outbreak of the German-Soviet War in June 1941, he was arrested and spent the rest of his life in different Soviet prisons. Johan Laidoner died on 13 March 1953 in a prison in Vladimir.

Ago Pajur, University of Tartu