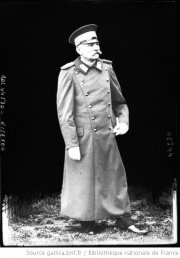 Peter I Karadjordjević, King of Serbia (1844-1921), or Prince Peter, was a grandson of Petrović Karadjordje (1768–1817), a leader of the First Serbian Insurrection against the Ottomans (1804-1813). He was also the third son of Alexander Karadjordjević, Prince of Serbia (1806-1885), who ruled Serbia from 1842 to 1858. His mother was Persida Nenadović, Princess Consort of Serbia (1813–1873). Peter became heir after the death of his elder brother, Svetozar Karadjordje (1841–1847). He attended elementary school and high school in Belgrade. After 1858, Peter continued his education in Geneva, Switzerland, until he moved to Paris in 1861 to attend the Collège Saint-Barbe. Peter got his military education at Saint-Cyr Military Academy and at Ècole Supèrieure de Guerre in Metz.

During his stay in France Peter adopted liberal ideas of the time. In 1868, he translated and published - at his own expense - the famous essay “On Liberty” by John Stuart Mill (1806-1873). When the Franco-Prussian War (1870-1871) broke out Prince Peter actively participated on the French side as a volunteer of the Foreign Legion Command. He was known to his friends from these days under the name "Pierre Kara." During the war he was promoted to second and first lieutenant. Peter distinguished himself at the Battle of Villersexel on 1 January 1871. He was awarded the Lègion d’honneur and was taken prisoner by Germans, but escaped by swimming across the Loire River. During the uprising against the Ottomans, which broke out in Bosnia and Herzegovina in 1875, Peter joined the insurgents. He fought there as a leader of Serbian guerrilla squad and was known under the name Petar Mrkonjić, a 17th century Serbian freedom fighter from Dubrovnik. During this time he met young Serbian politician Nikola Pašić (1845–1926), who became an ardent supporter of the Karadjordjević dynasty. Austrian intervention at the insistence of Serbian Prince Milan Obrenović (1854–1901) compelled Peter to leave the insurgents’ encampment in 1876.

Later, Peter went to Montenegro, where in 1883 became an honorary senator. On 12 July 1883, he married Zorka, Princess of Montenegro (1864–1890), first child of Prince Nikola I, King of Montenegro (1841–1921). They had five children. Prince Peter spent ten years in Montenegro; after his wife died, he moved to Paris and then settled in Geneva. His two sons, George, Crown Prince of Serbia (1887-1972) and Alexander I, King of Yugoslavia (1888–1934), were admitted to the corps of pages in St. Petersburg. On 15 June 1903, Peter, the oldest representative and only survivor of the Serbian national dynasty, was elected King of Serbia after the assassination of Alexander Obrenović, King of Serbia (1876–1903) and Draga, Queen, consort of Alexander Obrenović, King of Serbia (1864–1903). Upon his return to Belgrade on 21 September 1904, Peter was crowned king.

King Peter I as Regent↑

King Peter I’s lifelong experience, his liberal education, and his respect for constitutional traditions and parliamentary rules made him a strictly constitutional monarch, in spite of certain influence of military groups in his political life. He did much to promote the rapid political consolidation of Serbia after the upheaval of 1903. The 1903 constitution was a revised version of the 1888 constitution, which in turn resembled the Belgian constitution from 1831, and other European constitutions of the time.[1] The government was chosen from the parliamentary majority, and King Peter I himself was in favor of a broader coalition government that would boost Serbian democracy and help pursue an independent course in foreign policy, relying on Russia and France instead of Austria-Hungary. King Peter I paid visits to St. Petersburg and Paris, in 1910 and 1911 respectively, and was greeted as a hero of both democracy and national independence.

The reign of King Peter I from 1903 to 1914 is remembered among the Serbs as the "Golden Age of Serbian Democracy" [2] due to the unrestricted political freedoms, free press and cultural ascendancy among South Slavs, who saw in democratic Serbia a country that was able to unify all Serbs, Croats and Slovenes. King Peter I was supportive of the Yugoslav unification movement, hosting various cultural gatherings in Belgrade. During his reign, in 1905, the Grand School (Velika Škola) of Belgrade - comprising Faculties of Law, Philosophy, and Theology - was upgraded to become Belgrade University. King Peter I gained enormous popularity following the victorious Balkan Wars in 1912 and 1913, when the territory of Serbia doubled in size and its prestige grew significantly among South Slavs (Croats and Slovenes in particular, as well as the Serbs in Austria-Hungary). King Peter I was the main symbol of this political and cultural success.

On 24 June 1914 King Peter I chose to "retire" due to ill health, reassigning his royal prerogatives to his second son Crown Prince Alexander. His retirement was the consequence of the conflict on "Priority Decree" between the government of Nikola Pašić (1845-1926) and military circles led by the head of the secret military organization "Black Hand", Colonel Dragutin Dimitrijević (1876–1917), known as "Apis", which erupted in May 1914. The Decree gave priority to civilian over military authorities in the new territories annexed to Serbia after Balkan wars (1912–1913). This was an attempt of Prime Minister Pašić to hold the army under civilian and democratic control. Apis failed to conduct the coup d'etat to overthrow the government. The conflict was resolved after Premier Pašić, in accordance with Crown Prince Alexander, forced the old King Peter I, who was against the great disputs with the army circles, to a quiet abdication.[3] King Peter I spent most of his retirement in various Serbian spas and otherwise remained relatively inactive during the First World War.

Occasionally, when the military situation became critical, he visited trenches on the front line to check up on the morale of his troops. His visit to the firing line before the Battle of Kolubara in late 1914 boosted the morale of the retreating Serbian troops and announced a counteroffensive and victory against the larger Austro-Hungarian forces. During another memorable visit to the trenches in 1915, King Peter I picked up a rifle and shot at enemy soldiers. Following the invasion of Serbia by the joint forces of Germany, Austro-Hungary, and Bulgaria in October 1915, King Peter I accompanied the army and thousands of civilian refugees in their dramatic retreat in winter conditions, through the hostile Albanian highlands, towards the Adriatic Sea, which cost thousands of lives. In early 1916, the king and his army, exhausted by cold and starvation, were finally transported by the Allies - mostly French and Italian ships - to the Greek island of Corfu. King Peter I spent the rest of the war on Corfu and in Salonika and Athens. During his exile he supported attempts by Nikola Pašić and Prince Regent Alexander to get rid of the “Black Hand” organization on the so-called Salonika Trial, when its prominent members, including Colonel Dragutin Dimitrijević-Apis were convicted on false charges for a plotting a coup and assassination of Crown Prince Alexander and sentenced to death. On 1 December 1918, King Peter I was proclaimed King of the Serbs, Croats, and Slovenes. He stayed abroad until July 1919, and then returned to Belgrade, where he died in 1921 at age seventy-seven. 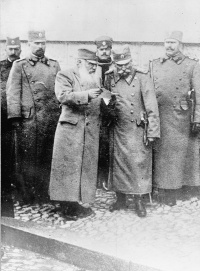