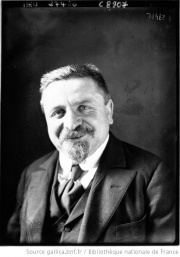 Gustave Hervé’s dates of birth and death (1871-1944) correspond broadly to those of the Third Republic (1870-1940). His path is strongly linked to it and his ideas partly reflect its contradictions. Fervently anti-militarist and anti-patriotic before the First World War, he gradually became a convinced nationalist. The Great War, if it cannot be considered the only cause of his drastic change, is certainly a significant factor. Another cause of his many ideological positions at different times is that he was more of a polemist than a politician and loved provocation and expressing his incendiary opinions.

Hervé as an Anti-Patriotic Socialist↑

Gustave Hervé (1871-1944) was born in Brest. But it was in Sens, in Yonne, where he moved in 1900, that he began his career as a propagandist. He collaborated with local newspapers Le travailleur socialiste de l’Yonne and Le Pioupiou de l’Yonne, writing under the pseudonym of Sans-Patrie. His articles, often provocative and incendiary, mainly focused on the themes of peasant socialism and anti-militarism and quickly gave him a certain celebrity.

Between 1901 and 1905 he wandered through the villages of Yonne, giving lectures on his favorite topics: internationalism, anti-militarism and agrarian socialism. A delegate of the Fédération socialiste de l’Yonne, he took part in the foundation of the Section française de l'Internationale ouvrière (SFIO) in 1905 and became a member of its executive committee, as an anti-militarist and anti-patriot.

His ideas are strongly expressed in his book Leur patrie, published in 1905, in which he demystifies the concept of homeland, defining it as a mere accumulation of ideological practices. He defended insurrectionist anti-patriotism, anti-militarism and internationalism with great enthusiasm: these ideas inflamed the French right and worried a large part of the socialist left.

He thus occupied a very specific position among the French and international socialists. At the SFIO congresses in Limoges (1906) and Nancy (1907), as well as at the 7th Congress of the Second International (Stuttgart, 1907), Hervé popularized the Yonne federation’s motion to respond to any declaration of war “wherever it comes from, with military strike and insurrection”.[1] This and his talents as a propagandist earned him notoriety even at the international level: for example, he was considered one of the greatest figures of international socialism by the Italian socialists, and not only by the most revolutionary. In reality, the debates that took place at the three congresses highlighted the theoretical weakness of Hervé’s ideas, which seemed to be the result of a mere desire for propaganda rather than reflections capable of elucidating the relationship between socialism, homeland and war.

In 1906, he founded a weekly magazine, La Guerre sociale, which soon reached a circulation of 50,000. The SFIO tried to remove him from the party, but neutralizing him was not feasible, because Hervé was now well-known. For his part, the Breton socialist threatened on several occasions to create his own revolutionary party, but never did so.

Hervé as a Nationalist↑

Because of his subversive ideas, Hervé was the object of various complaints and convictions and he entered and left prison several times. He ended his longest period of imprisonment (two years) in July 1912. On leaving, he was no longer the same. In a turbulent moment for international diplomacy, Hervé left all revolutionary ambitions behind. His aim now was to rebuild unity within the SFIO and to conclude alliances with other parties, first of all with the radicals. Hervé now maintained that political unity within France was the only antidote to international political problems. From the summer of 1914, shortly before the outbreak of the war, he openly defined himself as a patriot; his article La Patrie en danger is the manifesto of this change of sensibility. It is therefore not surprising that he aligned himself ideologically with the Union sacrée from August 1914. He went even further, openly opposing the attempts at socialist reconciliation made at the international level during the war (such as the Zimmerwald and Kienthal conferences): the national priority must remain exclusive in times of war. This earned him exclusion from the SFIO at the end of the war.

On 1 January 1916, La Guerre sociale became La Victoire and on its pages Hervé declaimed his National Socialism. He carefully observed the various phases of the installation of fascism in Italy, with which he was fascinated. In his opinion, however, this regime was not suitable for republican France: he hoped for the birth of an authoritarian republic. It is to this end that he founded the movements Socialisme national and La République autoritaire.

A philo-Nazi since Adolf Hitler’s (1889-1945) seizure of power, but critical of his anti-Semitic behavior from 1933, Hervé deviated from Hitler’s policy in 1938 following the anti-Jewish persecution. He was therefore one of the few sympathizers of National Socialism to leave because of anti-Semitic persecution. In the years leading up to the Second World War, he continued to advocate for the birth of an authoritarian French republic headed by Philippe Pétain (1856-1951). However, in 1940 he also departed from this view and appealed for reconciliation with Nazi Germany. He would have liked a fascist system, but purged of the more extreme character that Hitler’s Germany showed.

Following the German occupation of France, La Victoire was suppressed and Hervé was mistrusted by the French police and the Gestapo. He died in Paris in 1944. Shortly before his death, he wrote of himself that he was the first Bolshevik, the first fascist, the first Pétainist, the first member of the Resistance and the first Gaullist. A somewhat exaggerated definition, but one which summarizes the broad outlines of the Breton propagandist’s life.