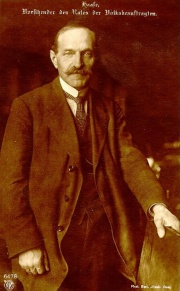 Hugo Haase was a prominent social democrat in the Kaiserreich, who opposed German war aims and formed the Independent Social Democratic Party (USPD) of Germany in 1917. He co-chaired the Council of People’s Representatives (Rat der Volksbeauftragten) during the 1918-1919 revolution. He was assassinated in late 1919 and is often eclipsed by other leading figures of his time in scholarship and popular memory.

Career in Law and Politics↑

Hugo Haase (1863-1919) was born in East Prussia, into a poor family of Polish-Jewish migrants. Having studied law in Königsberg, Haase joined the Social Democratic Party of Germany (SPD) in 1887 and established his own legal practice the following year, working as the only socialist defence lawyer in East Prussia. In 1894, he became the first SPD delegate in the Königsberg municipal assembly and was elected to the Reichstag in 1897, aged thirty-four.

Opposition to War and Party Split↑

Already a sharp critic of the armaments race in the preceding years, Haase led anti-war protests in July 1914. Having failed to persuade the majority of his comrades to withhold their support, he followed party discipline and read out the SPD Reichstag declaration in favour of voting to grant war credits on 4 August. However, in June 1915, Haase, Eduard Bernstein (1850-1932) and Karl Johann Kautsky (1854-1938) issued a manifesto titled “The Order of the Day” (“Das Gebot der Stunde”), urging the SPD to condemn Germany’s aggressive war aims, criticising the Burgfrieden and thus calling for the SPD to pursue an independent policy against the war.

Haase voted against war credits for the first time in December 1915, and stepped down as leader of the SPD parliamentary group. On 24 March 1916, he voted against an emergency budget, along with eighteen other delegates, after claiming in an impassioned speech that there would be no victors in the war, “only defeated peoples, bleeding from a million wounds”.[1] Following this, he formed a minority faction in the Reichstag, the “Social Democratic Working Group” (Sozialdemokratische Arbeitsgemeinschaft, SAG). The SAG became the parliamentary group of the USPD, which was founded under Haase’s leadership in April 1917 after its leading figures had been excluded from the SPD. While it set itself apart from the Majority Social Democrats (MSPD), the USPD was also heterogeneous, with Haase positioned in its centre and the small minority of radical Spartacists on the far left. Haase continued to speak out against the continuation of the war and led anti-war strikes in January 1918. He was also vocal in his criticism of the punitive Treaty of Brest-Litovsk, as well as the government’s censorship and surveillance strategies and later denial of German war guilt and military defeat.

During the armistice negotiations in October 1918, Haase was one of the few Reichstag deputies who favoured accepting Woodrow Wilson’s (1856-1924) conditions outright. In a Reichstag debate on 23 October, Haase argued that the Kaiser was the main hindrance to peace and, from mid-October, he and his USPD colleagues increased their appearances at public protests across Germany. Having travelled to Hamburg and Kiel following the naval mutiny and establishment of the Soldiers’ and Workers’ Councils, he had to rush back to Berlin when the revolution reached the capital.

Haase was influential in the USPD’s controversial agreement to cooperate on an equal basis with the MSPD in the Council of People’s Representatives. This group, which he co-chaired with Ebert, consisted of three members from each party. Haase was also responsible for external affairs. Despite his differences with the MSPD, he agreed that major decisions, including wide-scale industrial nationalization, should be made by an elected national assembly. However, he believed the interim government should prioritize managing the return of demobilized soldiers, improving supplies to the wider population and democratizing the civil service and military in cooperation with the Workers’ and Soldiers’ Councils, by revolutionary right. Disagreements over this latter point and the MSPD’s decision to use force against the People’s Naval Division (Volksmarinedivision) on Christmas eve led Haase, Wilhelm Dittmann (1874-1954) and Emil Barth (1879-1941) to resign from the government on 29 December, leaving the MSPD in charge alone. Throughout this, Haase opposed both state-led and revolutionary violence.

Haase was one of the twenty-two USPD representatives elected to the National Constituent Assembly (verfassungsgebende Nationalversammlung) on 19 January 1919. He was critical of the new constitution, especially the powers given to the president and its preservation of the capitalist order, and argued in favour of accepting the Versailles Treaty to secure peace. After the failed Munich Räterepublik, Haase served as defence lawyer for the revolutionary writer Ernst Toller (1893-1939). On 8 October, Haase was shot as he entered the Reichstag. He died one month later. Despite his prominence at the time, Haase’s position between moderate social democracy and communism means that he is no longer as well-known as Ebert, Scheidemann, Liebknecht and Rosa Luxemburg (1871-1919). 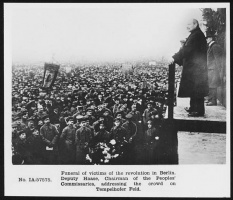 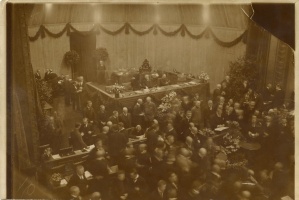 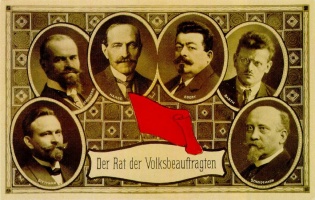