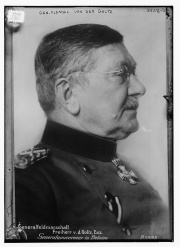 Colmar von der Goltz was one of pre-war Germany’s most outstanding and controversial military theoreticians. His publications had a considerable impact on military thought and the role of armed forces within society around the world. His ideas were especially popular in the Ottoman Empire after the 1908 revolution.

A Nation in Arms↑

Colmar von der Goltz (1843-1916) was deeply impressed by the improvised militia army deployed by the French Minister of the Interior Léon Gambetta (1838-1882) during the Franco-Prussian war. But Goltz was against a German militia system and favored a higher number of trained conscripts per annum. Therefore, in his eponymous 1877 book, Goltz pleaded for a reduction of the duration of military service from three to two years. This was usual for liberal minded politicians but inappropriate for a Prussian officer at this time, and resulted in Goltz’ disciplinary transfer as a company commander to Thuringia for one year.

Goltz’ most important work was “The Nation in Arms” (1883). It was an introduction to the contemporary state of the military and the future of warfare. For Goltz, in the age of mass armies, a short conflict like that of 1870-1871 was highly improbable. Future wars would lead to the total exhaustion of nations, and, therefore, the separation of civilian and soldier would no longer be appropriate. In these thoughts, Goltz clearly adapted the idea of the French levée en masse and added his own concept of the role of the armed forces within society. Goltz made use of popular Social Darwinist ideas of his time, especially in the sense that only the fittest nation would survive in the struggle among states. Therefore, military norms and practices should be accepted as normal by civilian society. Beyond that, Goltz claimed that the officer corps should have a leading role within society. The general (Feldherr), not necessarily of noble origin, should impose his will on the whole society in times of danger, a rather subliminal call for military dictatorship in war. The general “must, therefore, be born more to rule men than to please them.”[1] Goltz’ idea of a professional army led by a distinguished officer corps was welcomed in the German army, whereas the mobilization of the whole nation (Volkskrieg) was declined for its conspicuous Republican and revolutionary spirit. “The Nation in Arms” also had a global impact on military thinking, and was even read in the officer corps of nations hostile to Germany.[2]

Goltz' Impact on the Ottoman Army↑

Goltz had been the head of the German military mission to the Ottoman Empire (1883-1895). He also served as an advisor to the Ottoman army after the 1908 revolution. This was facilitated by Goltz’ former students who had taken key positions in the Ottoman high command after the deposition of Abdülhamid II, Sultan of the Turks (1842-1918). Among those former students and their followers in the Ottoman war academy, Goltz found enthusiastic supporters of his ideas.[3] This was even more the case since in the course of the Ottoman defeats in 1912-1913, Goltz defended the predominance of the Ottoman Muslims, who made up the biggest part of the Ottoman officer corps.[4] The appropriation of his Social Darwinist accented theses of national unity was to have fatal consequences in the last period of the Ottoman Empire. For Ismail Enver Pasha (1881-1922), main actor in the genocide of the Armenians, Goltz’ “Nation in Arms” was the “alphabet dans mon métier.”[5]

Although retired since 1913, Goltz was recalled to service. In September 1914, he became the German general governor in Brussels, contributing to the exploitation of occupied Belgium. After the Ottoman Empire joined the war on the German side, Goltz was deployed to the Ottoman ministry of war, in November 1914. He was effectively sidelined by General Otto Liman von Sanders (1855-1929), the head of the Germany military mission (1913-1917) in Constantinople, who had a strong dislike for the seventy-two-year-old veteran of German-Ottoman military relations. In the following year, Goltz mainly wrote reports for the German military high command and visited Ottoman troops in the field. For Goltz, the deportations of the Ottoman Armenians beginning in April 1915 were a necessary measure, and he did not protest against the massacres, which were known to him.[6] In November 1915, Liman von Sanders arranged Goltz’ transfer to the remote Mesopotamian front, where Goltz was put in charge of the Sixth Ottoman Army. In Mesopotamia, Goltz’ mission was to repel the British advance towards Baghdad and prepare the attack on India via Persia. Due to his responsibility for two theaters of war, Goltz ceded command in daily affairs of the Sixth Army to Brigadier General Halil Kut (1881-1957).[7] Goltz soon realized that, despite his pre-war assumptions, prospects in the Persian theater of war were not promising. In contrast, in Mesopotamia, Goltz’ Ottoman troops succeeded in the encirclement of the British garrison of Kut al-Amara. In March and April 1916, several British attempts to relief the besieged garrison failed. Goltz died of epidemic typhus in his Baghdad headquarters before the victorious end of the battle.