Freikorps units were paramilitary formations which generally supported rightwing political causes, although they existed within a broader paramilitary environment. Many First World War veterans joined the Freikorps when they were first created in late November 1918. Freikorps units were involved in combat operations during political unrest in the early years of the Weimar Republic before undergoing a significant organizational and methodological transformation into political organizations in the late 1920s.

By the end of November 1918, there were only seven Freikorps units, however the pace and scope of Freikorps recruitment dramatically increased during political unrest in December of that year. By 1 January 1919, there were 103 Freikorps units. Exact figures are missing, but records indicate that as many as 1.5 million men participated in Freikorps formations and their associated organizations between November 1918 and December 1923. As many as 500,000 troops directly served in units designated as “Freikorps,” although these numbers are only estimates.

Freikorps units were created primarily in three ways. First, many of the largest Freikorps units were formed through the conversion of former imperial army formations. These units contained many First World War veterans, and were generally loyal to the army high command. Second, some former imperial army officers independently organized Freikorps units from former wartime comrades. Many of these units proved to be rebellious and difficult for the German government and military to control. Third, Freikorps units were periodically created as a response to local crises, such as agitation along on the Polish border or leftwing domestic rebellions. These units were often short-lived and usually dissolved after only a few weeks or months of activity, having no unifying ideology or political cause that stretched beyond an immediate, localized crisis. Leaving behind few historical records, the “crisis Freikorps” represented the least professional and military capable expression of the Freikorps movement.

Under the direction of Social Democrat Gustav Noske (1868-1946), the Freikorps’ first major deployment came during the so-called “Spartacus Revolt” in January 1919 in Berlin. The quick and harsh suppression of the leftwing uprising and the subsequent campaign against the Workers’ and Soldiers’ Council movement in northern and central Germany earned the Freikorps a reputation for violence and frequent use of overwhelming firepower against their enemies. However, recent scholarship by Benjamin Ziemann has challenged this narrative, which was largely self-promoted by the Freikorps. While the largest and most professional of the Freikorps formations did occasionally deploy for engagements in a standardized military fashion in major operations, such as in Berlin (January 1919), Bremen (January 1919), Weimar (February 1919), Munich (April-May 1919), Latvia (February – May 1919), Estonia (May – July 1919), Munich (March – April 1920), the Ruhr (April 1920), Hamburg (1921) and The Battle of the Annaberg (May 1921), these were infrequent and represented the most battle-like moments of the Freikorps movement. Although these combat actions became central to the popular image of the Freikorps, they were rare compared to policing and occupation operations performed by smaller and more ad hoc units that were more akin to asymmetrical combat formations.

Broadly speaking, Freikorps deployments can be grouped into two main categories: reactive and pro-active. The most battle-like combat formations, those deploying significant military hardware such as armoured cars, artillery, mortars, and machine guns, were used to respond to leftwing revolts or clashes with Polish paramilitaries. Domestically, their primary objective was to crush all trade union and communist activity that openly disobeyed Social Democrat leader Friedrich Ebert’s (1871-1925) government. However, after the Freikorps units quickly, and often bloodlessly, pacified their opponents, they turned to a network of support units to maintain so-called “Peace and Order” (“Ruhe und Ordnung”). Support units, such as the Civil Guards (Einwohnerwehr), the Security Police (Sicherheitspolizei), the Border Guards (Grenzschutz), and the People’s Militia (Volkswehr) played a critical role in maintaining the appearance of authority in conquered regions and in rural areas. Freikorps formations were also active outside of Germany’s borders, particularly in the Baltic states of Latvia and Estonia from March to July 1919. Fiercely independent, and increasingly radical in their nationalist sentiment, the actions of the renegade Baltic Freikorps significantly influenced the government’s perception of the paramilitary movement thereafter.

The major transformation of the Freikorps movement from a socially and politically significant military phenomenon into a collection of dissident political organizations occurred in the spring of 1920. Following their involvement in the failed Kapp-Lüttwitz Putsch in March of that year, and the appointment of General Hans von Seeckt (1866-1936) as commander of the Reichswehr, the Freikorps’ autonomy and strength began to decline. Seeckt saw the Freikorps as a symbol of rebellion and independence within the military realm. He used his powerful influence over the officer corps to cull the vast majority of Freikorps troops from the Reichswehr and restrict future access to all government funds and equipment to the Freikorps movement.

The end of government approval and assistance had a powerful effect on the nature of the Freikorps and prompted their transition from a functional military organization into an illegal, violent social and political movement, devoid of any military value. With the loss of crucial government support, Freikorps members began to drift away from their units until only a very small, but highly politically motivated core remained by 1921.

By 1923, the structural organization of Freikorps units had changed drastically from their immediate postwar form. By in large the major military capabilities of the Freikorps no longer existed, and instead they tended to operate as “political combat leagues” as historian James Diehl has described them, focused on propaganda activities and occasional political assassinations. Although still committed to the use of violence to achieve political objectives, after 1923 the Freikorps were more active in street fighting and pub brawls than attacking dissident communists.

The legacy of the Freikorps movement must be assessed both in terms of the role its former members would play in rightwing politics in the later Weimar era and the Third Reich, as well as its importance as a cultural and political symbol after 1923.

From an organizational perspective, the Freikorps movement was shattered after Hans von Seeckt’s reformation of the Reichswehr. After 1923, Freikorps operation drastically changed and they were generally re-organized as “political combat leagues,” with almost no military value. Lacking firepower and legal protection, Freikorps units now focused on street brawls and dispersing socialist and communist meetings. Many members left the Freikorps movement either as private citizens, or joined the other organizations, like the Stahlhelm veterans association, or the National Socialists SA (Sturmabteilung or Storm Troopers). While some former Freikorps members eventually reached prominence during the Third Reich, they tend to be over shadowed by the general distrust most Freikorps members faced within the National Socialist German Worker’s Party (NSDAP). Indeed many Freikorps fighters were purged during Adolf Hitler’s (1889-1945) June 1934 purge (“Röhm-Putsch”).

However, even as the military strength of the movement faded after 1920, Freikorps memoirs ensured that the image of the Freikorps Fighter (Freikorpskämpfer) remained a powerful political symbol among rightwing circles in the late Weimar Republic. Even during the Nazi period, the symbol of the Freikorpskämpfer retained some of its political value. The Freikorps fighter became a plastic symbol of nationalism, anti-communism, and militarized masculinity deployed by NSDAP to co-opt the lingering social and political support of the once powerful movement. 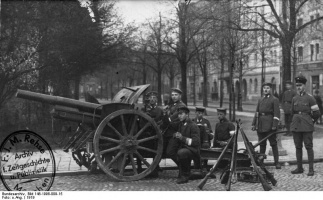 Freikorps soldiers and a howitzer 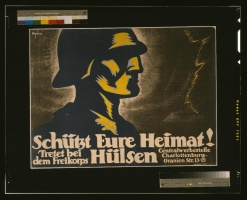 "Protect your homeland! Enlist in the Freikorps Hülsen", recruitment poster 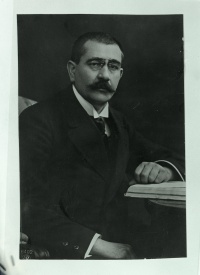 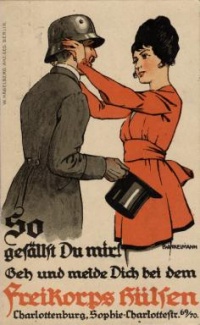 "This is the way I like you - Go and report to the Freikorps Hülsen", recruitment poster