In the 19th century, the German-Polish borderlands became the object of nationalist designs on both sides. After 1871, the German nation-state sought to limit Polish citizens’ room for manoeuvre. During the First World War, the issue intensified due to German occupation policy in Russian Poland and ethnic Polish cross-border connections. Germany’s defeat, Poland’s subsequent claims on German territory, and favour for Poland in post-war settlements cemented German-Polish antagonism.

The origin of the German-Polish “borderland issue” lay in the partitions of Poland in the late 18th century. After the Congress of Vienna in 1815, Prussia contained about 8 percent of the former Polish-Lithuanian Commonwealth. During the pre-March era and the 1848 revolutions (“Springtime of Nations”), an ethnic-exclusivist notion of nationality gained traction; this affected the perception of borders that now were seen as delineations of different ethnic bodies. However, efforts on the part of the Prussian government in 1848 to establish a “correct” border between German and Polish settlement areas foundered on the intermingled settlement structures and on growing nationalist tensions that resulted in a Polish uprising and a Prussian clampdown. Polish cultural autonomy rights were consequently weakened, although the Polish minority continued to be recognised as a legitimate group.

This began to change in the context of German unification, led by Otto von Bismarck (1815–1898) since 1862. Polish deputies in the Prussian Diet and the German Reichstag protested the inclusion of the provinces of Posen and West Prussia in the North German Federation in 1867 and the German Reich in 1871; their inclusion was an alleged violation of the principle of nationality. A growing divide developed over the assimilationist and later exclusionist policies applied since the 1870s by the Prussian government against the Poles (Polenpolitik). For their part, the Poles created their own cultural and economic associations, forming a kind of parallel society.

Within the Reich, Polish and German historians, geographers, and archaeologists began an academic-ideological battle over the true historical belonging of the mixed territories. To this end, these scholars cited “objective” historical, linguistic, archaeological, and other evidence for their nations’ mutually exclusive territorial claims. On the political level, the National Democrats - led by Roman Dmowski (1864–1939) - came to perceive a strong, ethno-nationalist Germany as the main enemy of “Polishness”. Their territorial claims targeted the German-Prussian east (sometimes even beyond the pre-partition borders) and identified Posen/Poznań as the “cradle” of Polish history.

The Impact of the First World War↑

When war broke out in August 1914, the Central Powers and Russia sought to win Polish support by blaming the other side for the partitions and promising “national liberation”. The Poles thereby received essential political recognition. However, the Central Powers had no clear concept for the settlement of the Polish question, even after they occupied Russian Poland in summer 1915. Whereas Austria aimed at uniting Russian Poland with Galicia under the so-called “Austro-Polish solution”, Germany had no immediate territorial aims in the region. German leaders initially favoured handing Russian Poland back to the tsar in exchange for a separate peace. In the face of persistent Russian refusal, from 1916 onwards the Germans sought to secure their strategic position by creating buffer states from the ethnically non-Russian borderlands of the Russian Empire (Randstaatenpolitik). Next to the Land Ober Ost, the main project, there was a new Polish state (the Kingdom of Poland), which the Central Powers duly proclaimed on 5 November 1916. While its borders were left undefined during the war, Germany’s partly Polish-inhabited provinces were naturally off-limits as possible territory of the new Polish state from the point of view of the German government. But the very fact of the Kingdom’s creation, as well as the pro-Polish policies implemented by the occupiers, fuelled nationalist feelings on the part of the Prussian Poles as well. In the face of uncertainty about future developments in the Kingdom, the German authorities considered annexing a strip of Russian Polish territory in order to improve their eastern border strategically (Grenzstreifen). However, these ideas never became official policy, nor did related plans to resettle the Prussian Poles east of the German border.

In time, most Prussian Poles supported the National Democrats who, starting in 1916, redirected their anti-German propaganda efforts from Russia towards the other powers of the Triple Entente. The Polish National Committee, set up in Paris in 1917 and headed by Dmowski and Ignacy Paderewski (1860–1941), offered support to the Entente in exchange for recognition of Poland as an allied nation. In this context, the Committee - while referring basically to the pre-1772 borders - put forward extensive claims for German territory, saying these claims would strengthen Polish ethno-nationalism and weaken Germany strategically (Dmowski Line). France in particular was open to this approach, whereas Britain and the USA showed more scepticism towards the Polish claims. However, US President Woodrow Wilson (1856–1924) included the creation of a Polish state from “undisputedly Polish inhabited lands” in his Fourteen Points, published 8 January 1918. Nevertheless, the armistice with Germany of 11 November 1918 left the German eastern border intact and assigned its final determination to the forthcoming peace conference.

This move prompted the National Democrats to try to shift things in their favour. The Greater Polish Rising that began on 27 December 1918 brought most of the Posen province under Polish control by mid-January 1919. It also seemed to demonstrate the Polish character of the region. The Allies’ approval of this conquest, despite the fact that the region was still officially German, was a political success for the Endecja (National Democracy). This also foreshadowed the arbitrary, interest-based application of the right to national self-determination, invoked by the Entente Powers as an ethical basis for their war effort.

The Versailles Treaty signed on 28 June 1919 approved the larger part of the Polish claims to German territory. While the Germans had anticipated the cessation of Posen, the imminent loss of most of West Prussia - designed to give Poland access to the sea - triggered protests among the German majority of that province. Moreover, this move would cut off East Prussia from the rest of Germany. The almost purely German city of Danzig (Gdańsk), to which the Poles had made a claim, was turned into a “free city”. Several hundred thousand Germans emigrated to the Reich from the ceded territories, either voluntarily or as a result of administrative pressure from Polish authorities. These border changes and their consequences became a major source of German resentment.

In contrast, the Allies granted plebiscites in Masuria-Ermland (Warmia) and Upper Silesia, which took place in July 1920 and March 1921, respectively. In Masuria-Ermland, more than 95 percent voted to remain German, including most of the Polish-speaking Masurians. In Upper Silesia (i.e. the Oppeln district of the Prussian province of Silesia), the process was more protracted and violent. Given that a large part of the local population was uncertain as to their nationality, and thus the outcome of the plebiscite was hard to predict, pro-Polish forces sought to create a fait accompli in Silesia similarly to how they had done in Posen during the Greater Polish Rising. To this end, in 1919 and 1920 pro-Polish insurgents from both Silesia and Poland staged two armed risings - called the Silesian Risings - but were repelled by German counterinsurgents.

When the plebiscite was finally held and brought a 60 percent majority for Germany, the Poles launched a third rising in April 1921. This led to heavy fighting - most famously, the Battle of Annaberg in late May - and was only ended by Allied armed intervention. The outcome was the partition of Upper Silesia in a way that left the majority of valuable industrial sites on the Polish side. The western part became the Prussian province of Upper Silesia while the eastern part was attached to Poland as the Silesian Voivodeship (Województwo Śląskie). Both territories were covered by the German-Polish Accord on Upper Silesia signed in Geneva on 15 May 1922; for fifteen years, this agreement guaranteed equal rights to all inhabitants of the region and was supervised by the League of Nations. 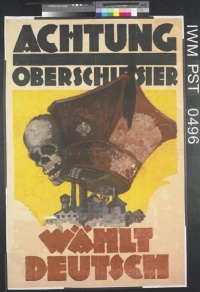 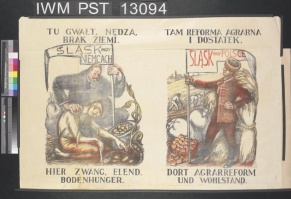