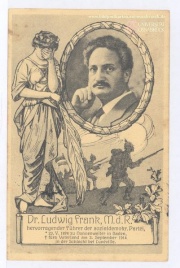 Ludwig Frank was a member of the Reichstag for the Social Democratic Party. When Germany entered the war, he strongly supported voting for war loans and volunteered for war service at the age of forty. He was killed in combat shortly afterwards in France.

A Social Democrat from Southern Germany↑

Ludwig Frank (1874-1914) was born to Jewish parents in Nonnenweier (Baden), a small village in the Upper Rhine region of southern Germany. Though he identified culturally as a Jew, religion did not play a major role in his education. Frank came into contact with socialist ideas shortly before graduating from the Scheffel-Gymnasium in Lahr in 1893. In his valedictorian speech on “Nathan the Wise” he interpreted Gotthold Ephraim Lessing’s (1729-1781) work along socialist lines of class struggle, which triggered a minor scandal in the local press. Soon afterward he began to study law, first in Freiburg and later in Berlin. In 1899 he received a PhD. His years of study as well as his first years as a lawyer in Mannheim were decisive stages of his political socialization and alignment with the Social Democrats. After being elected to the lower chamber of Baden’s diet in 1905, Frank became a member of the Reichstag in 1907. At this national platform his political agenda focused mainly on three issues: his opposition to Prussia’s three-class franchise system, his fight to stop increases in military spending, and his support for drafting a constitution for Alsace-Lorraine.

Despite his local rootedness, Ludwig Frank’s political attitude was also influenced by events, ideas and persons reaching beyond regional and national borders. In the early years of his political career, he became very much inspired by the radical platform of the Belgian youth labor movement. Furthermore, Frank himself became a leading figure in Germany’s social democratic youth movement. As his political career progressed, he would gradually align himself, however, with more moderate positions among German socialists. This change of course was due, among other factors, to his personal encounters with Jean Jaurès (1859-1914), the leader of the French socialists, who practiced strategic alliances with the bourgeois left. Frank’s adaptation of such practices to the political context of Baden was, however, not shared by all members of the SPD and led to inner-party frictions. Furthermore, in order to fight the Prussian suffrage, he also supported the idea of mass strikes as a legitimate political means. Besides his reformist stance, Frank publicly expressed his pacifism and was at the forefront of organizing two interparliamentary peace conferences in Bern (1913) and Basel (1914) that aimed to find a way to prevent a war between Germany and France.

Ludwig Frank, who had never married, volunteered for war service on 5 August 1914 with the 110th (2nd Baden) Grenadiers “Emperor William I”. His motives for volunteering were deeply entangled with his willingness to demonstrate his political loyalty towards his fatherland, thereby at least partly reverting his outspoken pre-war pacifism. Like activists of other marginalized groups within German society, he hoped, however, that participation in the war would lead to a democratization of society and politics. Frank’s change of action was already preceded by his campaign in the Reichstag among Social Democrats to vote for war credits after Germany had entered the war on 1 August 1914. Though his Jewish heritage had become more important for him in his adult years, Frank’s decision to volunteer was, in contrast to other Jewish intellectuals, not primarily motivated by aspirations to further Jewish integration into German society. Rather, he considered his loyalties as a German, a Social Democrat and a Jew from Baden to be mutually inclusive. On 3 September 1914, almost two decades after he had completed his one-year voluntary service in the armed forces at Freiburg in 1894-95, Frank was killed in combat in Nossoncourt near Baccarat (Lorraine) at the age of forty. For the Social Democrats his death became a symbol of their patriotic engagement for the German “nation” during and in the aftermath of the First World War.