Ludwig Freiherr von Falkenhausen was a German General and military writer who served in different leadership positions during World War One. From 1917 until the end of the war he was governor-general in Belgium.

Ludwig Freiherr von Falkenhausen (1844-1936) was a Prussian General of the Infantry. He entered the army in 1862 and fought in the Austro-Prussian War in 1866 and in the Franco-Prussian War of 1870/71, receiving an Iron Cross Second Class. In the following years, he was promoted until he became Commanding General of the XIII Army Corps until his retirement in 1902. In the years before the war, he published a number of military studies dealing with issues of training and future wars. In the contemporary debate about the command of mass armies, he opted for a mixture of breakthrough and enclosure which he argued could be achieved through superior leadership.

Falkenhausen during the First World War↑

At the beginning of the war, Falkenhausen chose to be reactivated and was appointed leader of a reserve corps with the Sixth Army in Lorraine on August 28, 1914. After the battle of Marne and the retreat of his troops, he served as commander-in-chief of the Army Unit Falkenhausen (later renamed to Army Unit A). His task was to secure the territory between Metz and the Vosges while engaging in static warfare, which had developed in the meantime. On Christmas Eve 1914, he was promoted to Colonel General.

In mid-April 1916, Falkenhausen was transferred to Hamburg as “Supreme Commander of coastal defence”[1] to counter suspected British landing operations in Schleswig-Holstein. In August 1916, he was appointed leader of the Sixth Army in Flanders following the establishment of the army group Kronprinz Rupprecht. In April 1917, he left this post after some territorial losses in the Battle of Arras and replaced the deceased Moritz Freiherr von Bissing (1844-1917) as governor-general at the Imperial Government General in Belgium. Falkenhausen fulfilled the orders of the Oberste Heeresleitung and continued the harsh policy of forced labor and economic exploitation by confiscating commodities of all kinds and forcing the occupied to pay contributions and monetary penalties. He also supported the attempt to divide Belgium into a Flemish and a Walloon territory so as to extend German influence. In September 1918, shortly before Max von Baden (1867-1929) became chancellor, Erich von Falkenhayn (1861-1922) had suggested Falkenhausen for this position instead. Falkenhayn expected him to rule “as a man with dictatorial powers”.[2] But such ideas did not take hold within the political elites and this is why the apparently liberal Prince Max von Baden took office. After the armistice and revolution in Germany, Falkenhausen and the occupation forces left Belgium step by step until the end of November. On November 26, Falkenhausen’s mobilization-order was abrogated.

During his service in World War I, Falkenhausen received several decorations including the Iron Cross First Class (September 1914), the medal Pour le Mérite (August 1915) and the Order of the Black Eagle (January 1917), amongst others. 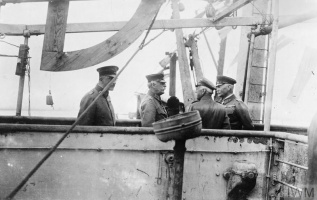