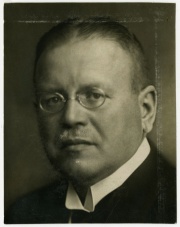 As a Member of Parliament 1917, Erzberger, the former annexationist, played an important role in drafting the Reichstag’s Peace Resolution and the setting up of the Interfraktioneller Ausschuss (Interparty Committee). As secretary of state of the first German parliamentary government, Erzberger signed the armistice of Compiègne. In 1921, right-wing terrorists killed the leading democratic politician of the Weimar Republic.

After eight years in different functions within the Württemberg Catholicism,[1] Matthias Erzberger (1875-1921) was elected to the German Reichstag in 1903. He subsequently became one of the most important politicians of the Centre Party’s left wing. Because of his criticism of German colonial policy he became both prominent in, and a subject of hate for, the German right.

During the First World War, Erzberger was a prominent supporter (and sponsor) of the Burgfrieden. His nationalism was in no small part driven by his hope for an end to anti-Catholic discrimination in the German Empire. At the beginning of the war, Erzberger argued in internal memoranda for German annexations in the East and West. Nevertheless, he continued to campaign for a political end to the war through diplomatic negotiations. In autumn 1916, Erzberger failed in his efforts to persuade his party to oppose German unrestricted submarine warfare. Convinced that Germany was unable to win the war, he became one of the prominent supporters of a negotiated peace settlement (Verständigungsfrieden) in 1917.

As special envoy of the German government, Erzberger coordinated German propaganda in neutral states and tried to win favour with Catholics all over the world. During the war, Erzberger had an excellent relationship with Pope Benedict XV (1854-1922) and his Nuncio in Munich, Eugenio Pacelli (1876-1958). Erzberger was also involved in some international intelligence operations, especially those supporting bomb attacks on Caucasian oil pipelines and the failed smuggling of bombs into the Ottoman Empire during the Battle of Gallipoli. As a delegate to Italy (1915) and Romania (1916), Erzberger failed in his efforts to campaign to win Italian and Romanian support for German diplomacy. Negotiating the future of the Christian missions in the Ottoman Empire, Erzberger voiced his opposition to the Armenian Genocide during high-level talks in 1916. After the February Revolution in Russia in 1917, as special envoy of the German Foreign Office, Erzberger secretly prepared a German-Russian armistice in Stockholm. The German Supreme Command and the Kaiser, however, broke off the negotiations.

Having realized the impossibility of a German victory, and in order to save the Burgfrieden, Erzberger campaigned successfully for the Reichstag’s greater involvement making foreign policy. This led to the Reichstag’s Peace Resolution of July 1917. Erzberger’s campaigns resulted in the creation of the Interfraktioneller Ausschuss (Interparty Committee), the nucleus of what would become the “Weimar coalition”. Erzberger failed, however, to achieve official German approval of the Papal Peace Note of August 1917. In the following months, Erzberger fought the megalomaniac war aims of the Pan Germans and the German Supreme Command. In domestic politics, Erzberger campaigned for the political cooperation of the Centre Party with Liberals and the Social Democrats, and for the parliamentarisation of the political system of Germany. In October 1918, Erzberger became a member of the first parliamentary government of Imperial Germany, where he implemented fundamental constitutional reforms and made real efforts to end the war.

On 11 November 1918, Erzberger signed the armistice of the First World War in Compiègne, on behalf of the German Supreme Command and the new revolutionary government. Erzberger also coordinated the German execution of the armistice until the peace conference in Versailles. In the spring of 1919, Erzberger was one of the most important supporters of the signing of the Treaty of Versailles. As Vice-Chancellor and Minister of Finance, he reorganised the German tax and financial systems throughout 1919 and 1920, against massive opposition from old Wilhelmine elites.

In summer 1917, the political right started vigorous attacks on Erzberger because of his support for the Verständigungsfrieden. In the Weimar Republic, the stab-in-the-back-myth became an important political weapon against Erzberger and the young democracy. Following several unsuccessful attempts to end his life over two years, members of a right-wing terrorist organization called “Consul” assassinated Erzberger in 1921. 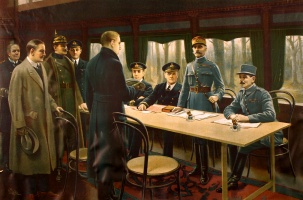